9 Signs You’re Lying to Yourself Without Knowing It 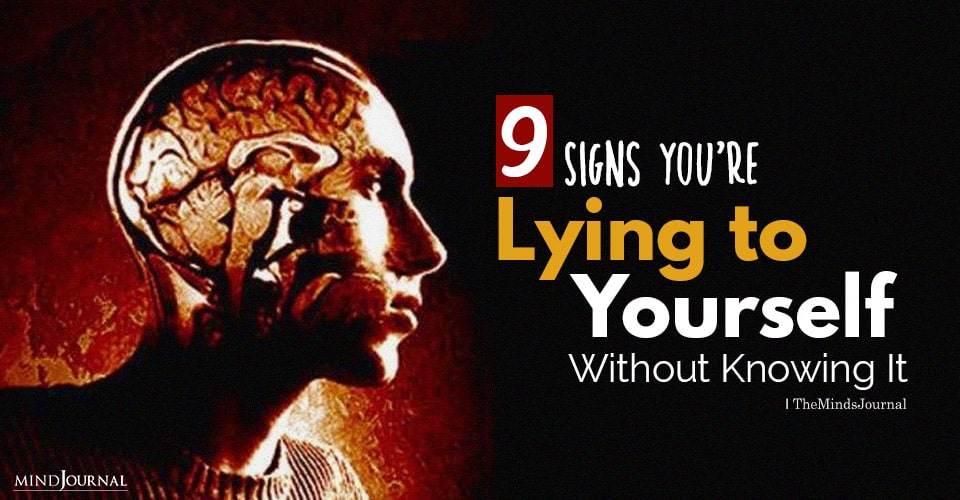 Lies are a little fortress; inside them, you can feel safe and powerful. Through your little fortress of lies, you try to run your life and manipulate others. But the fortress needs walls, so you build some. These are the justifications for your lies. You know, like you are doing this to protect someone you love, to keep them from feeling pain. Whatever works, just so you feel okay about the lies. – William Paul Young

Dishonesty is a trait that most of us have no problem pointing out in others.

We feel a sense of anger, disgust, and mistrust towards those who try to deceive us. In fact, deception is such a dishonorable quality to us that we spend large amounts of our time reading about shady politicians and watching shows that center around lying and cheating characters. Secretly, it feels good to point the finger at others because it makes us feel morally righteous.

But here’s the truth:

at the end of the day, most of us fail to see that we also lie – to ourselves – frequently.

Sadly, most people aren’t willing to explore their hidden tendencies and face the truth. Deception is such a despicable quality that we would rather disown it than face it honestly. Unfortunately, the more we disown our darker tendencies, the more deeply we bury them within our Shadow Selves, and the more delusional we become. And the more delusional we are, the less mental and emotional clarity we have, which leads to a legion of problems. Some of these problems are life-destroying.

4 Reasons Why We Lie to Ourselves

If deceit is such a contemptible quality, why do we lie to ourselves? Here are a few reasons why:

For example, a man who cheats on his wife may justify his actions by saying, “If only she had given me more affection and love, I wouldn’t have strayed.” This justification, of course, is a form of self-deception because it prevents the man from fully coming to terms with what he has done. Furthermore, lying to himself helps him to preserve the belief that he’s a “good and faithful” person.

The following examples might help to deepen your understanding of self-deception more. See if you can relate to any of these examples:

A woman gets a high-paying attorney job at a popular firm. After months in her job, she begins to experience chronic illness and panic attacks. Convinced that she’s just going through a bout of bad health, she continues working in her high-stress job until she has a nervous breakdown.

A man is in a relationship with a woman who he believes is his soulmate. The man continues to believe that the woman loves him, even after she has repeatedly told him that she wants to break up.

A student is preparing for a college exam. He finds himself frequently procrastinating and keeps telling himself that he’s “not in the mood to study.” He then takes the exam and fails. In reality, he was procrastinating because he was scared of the pressure that comes with good grades.

A woman has joined a local church. She loves hearing sermons about love, acceptance, and compassion. But after the ceremonies, she observes that the fellow churchgoers are judgmental, racist, and narrow-minded. She turns a “blind eye” to the behavior of these people, convincing herself that she is on the “right moral path.”