7 Sneaky Things Narcissists Say to Get You Back 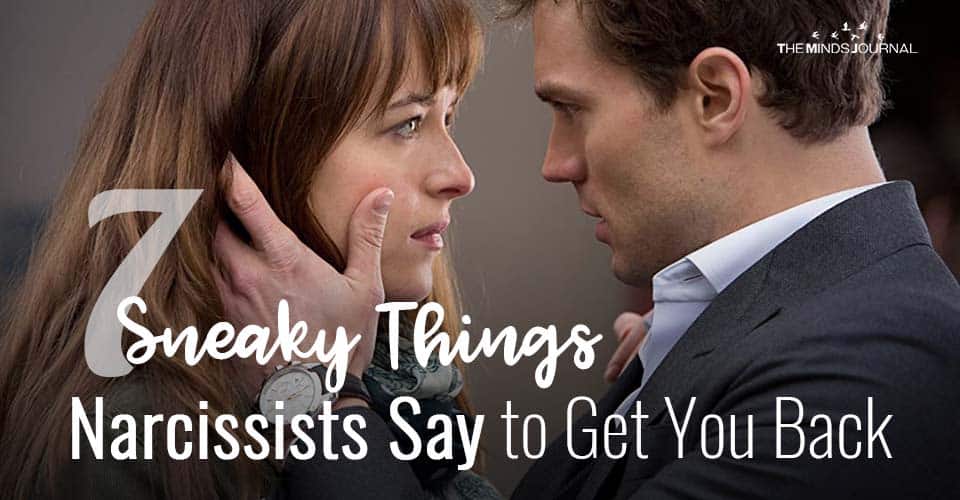 Narcissists rarely ever admit to it, but all of your worst fears regarding your relationship are playing out just underneath the radar of your awareness.

You know that ever-present, vague sense of dread you have in the pit of your stomach, wondering if they’re lying or telling the truth?  That’s your intuition, which can cause physical sensations in the body.

However, empathic and intuitive people sometimes get themselves into trouble by not listening to their intuition, which is very common when they find themselves in relationships with narcissists, sociopaths, and psychopaths.

Admittedly, when it seems the narcissist will go to any length to get you back, it’s easy to mistake their trickery for genuine remorse and a desire to make things work when it’s really a calculated to appeal to your sentimentality and timed to catch you at a weak moment – often when you’re feeling vulnerable or reflective. It is a scheme meant to toy with your emotions in an effort to get you to soften up and reconcile.

Hoovering is a technique that’s employed by manipulative and narcissistic con artists to suck their victims back into a relationship with them by exhibiting improved or desirable behavior. It’s named after the Hoover vacuum cleaner because the hoovering narcissist not only desires to suck you back into the relationship but will ultimately treat you like dirt.

See a typical example of Hoovering in this short video:

We all know to avoid people who appear insane or abusive and not enter into or maintain intimate relationships with them. However, narcissists, psychopaths, and sociopaths are masters at hiding their personality and behavior abnormalities (and their pathological agendas).  The Narcissist in your life – employing very specific techniques of psychological manipulation – executes ultimate trickery in trying to get you back, while keeping hidden secrets that would literally bring you to your knees.

Below, I map out the most common verbal cons of narcissistic spouses, fiancés, and partners of varying degrees of intimacy – and the maneuvers they’re pulling on you to scam you back into a relationship with them, thereby greatly reducing your true chance at freedom and a life without their traumatizing douchebaggery.

1. “I’ve decided to go to counseling”

After numerous silent treatments, disappearing acts, and bait-and-switch schemes carried out by your toxic partner, you tell them you can’t live this way any longer and give them the much-needed boot.  They come back later, look at you with a straight face and all sincerity and announce, “I’ve been thinking about what you said.  I know it’s important to you and I want to make this work, so I’ve decided to go to counseling.”

Reality – The illusion that they are willing to “make it work” and go to counseling is one of the narcissist’s favorite tricks.  This may be in regards to their anger management issues, alcoholism, excessive jealousy, infidelity, or sex/porn addiction (often, a combination of all of the above).

It’s nothing more than a way to buy time. They have no intention of being honest in the therapist’s chair and, in fact, will use the opportunity to make you look unhinged, using their trip to the Dr.’s office as a way of learning the lingo to make you look like the unstable one, which causes you to further believe you’re the one with problems and feel lucky that the Narcissist “has agreed to stay with you”.

As a person who loves the narcissist, you may deeply want to believe that your toxic partner is being sincere because you hope they’ll finally go back to being the person they were in the beginning of your relationship.  They may even secrete a few tears in an attempt to drive home the point, but the unfortunate truth is that a large population of narcissists employ this trick and in no time, it’s back to business as usual – and the abuse is much worse.

You’ll be hard-pressed to find a single documented case where a victim of narcissistic abuse has seen a happy ending due to the narcissist’s humanitarian, soul-searching “decision to go to counseling”.  In fact, it usually ends in the victim needing his or her own therapy because of the tricks and mind-games that ensue once they are deceived into giving the relationship another chance.