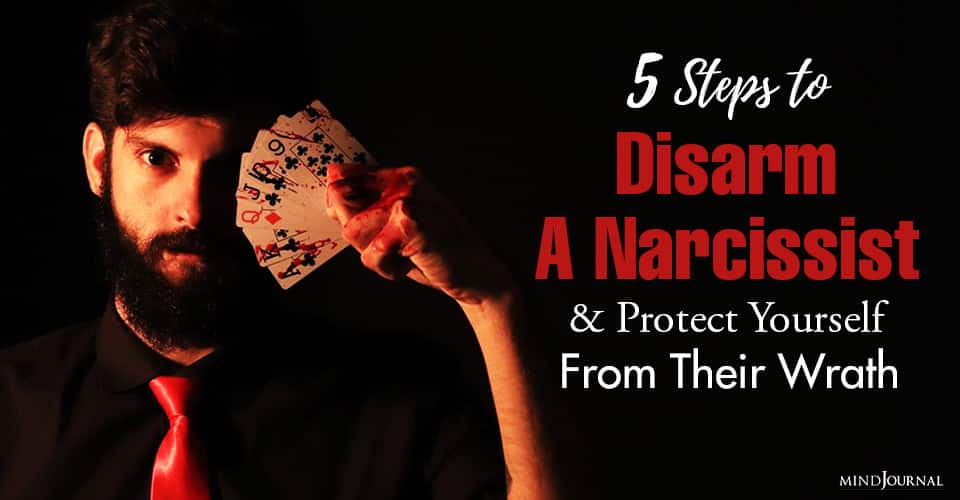 You can’t change a narcissist, but you can learn how to disarm them and protect yourself from the havoc they wreak on your life. Once you have the tools and knowledge to disarm a narcissist, you will slowly become immune to their manipulations and toxicity.

I didn’t realize I was married to a narcissist until I divorced one.

I never connected the dots between my husband’s manipulative and emotionally avoidant behavior, lack of empathy, and his inability to compromise or put anyone before himself, even his own family. I felt there had to be a pathological explanation for his behavior, but I didn’t know what. And despite my best attempts, I couldn’t pinpoint an effective way to sustain our relationship.

Then he walked out the door, which was a blessing in the end.

According to the American Psychological Association, narcissism is a personality disorder that causes people to have a delusional sense of self-worth and lack of empathy. Narcissists are incapable of regulating their emotions and considering the impact their actions have on others.

But clarity is powerful because it’s your best defense against a bully. And make no mistake about it, narcissists are bullies.

“The tough thing about a relationship with a narcissist is that they often run on hope,” says psychologist Ramani Durvasula, Ph.D. in her interview, Speaking of Psychology: Recognizing a Narcissist.

Unless your narcissistic partner is willing to do a lot of work in therapy, life is never going to get better and you will suffer. Co-parenting with a narcissistic ex is complicated at best, enraging at worst. The problems you experienced in your marriage don’t disappear after a divorce, just as personality disorders don’t fall to the wayside when you’re in the midst of a custody battle.

My husband used to give me the silent treatment when he didn’t get his way. He’d declare himself right and simply move into the guest room until I changed my mind. It brought me to tears every time. There was no empathy, reasoning, or compromise from him.

I shouldn’t have expected any empathy from him during our divorce either, but I did because it’s just the way my brain is wired, like most people, to think about what’s fair. So when it comes to my ex, I had to rewire.

Related: 4 Techniques To Control and Disarm a Manipulator

Narcissists don’t do partnerships. The more you give, the more they want, until you can’t give anymore and are wrecked, and then they walk out the door, looking for their next victim. It’s called narcissistic supply. They need it. You have it. Your job is to provide it until they are happy.

People with narcissistic tendencies can be so damn charming. It makes you doubt yourself as hope flashes by. It will pass, though… it always does.

There is a reason why flight attendants remind passengers to “secure their own oxygen mask first, before helping others.” Because for most people, our instinct is to reach out and help our loved ones first. As parents, we have to fight our instinct to put our child’s safety before our own. We operate on auto-pilot by ensuring our offspring’s safety. That’s why we need a reminder: put your own mask on first.

A narcissist on an airplane? He doesn’t need a reminder. He’s probably thinking, why would anyone need a reminder to save yourself first? And yes, this includes their own children. It’s not that narcissists don’t love their children, it’s that their brains are literally not capable of putting anyone, their children included, before themselves.

As sad as it sounds, narcissists often see their children not as separate beings, but as an extension of themselves. What does that mean? That a narcissistic parent is likely to feel whatever makes them happy will also make their child happy, like it will rub off on them, as opposed to a parent considering what their child’s needs are first, then thinking about how to structure their own needs around that.

June Grace is a freelance writer who grew up traveling the globe. She writes about her adventures in love, motherhood, and the relentless search for balance. June has a master’s degree in psychology and her writing has been featured on xoJane and YourTango. You can read more of her work on junegrace.com.View Author posts