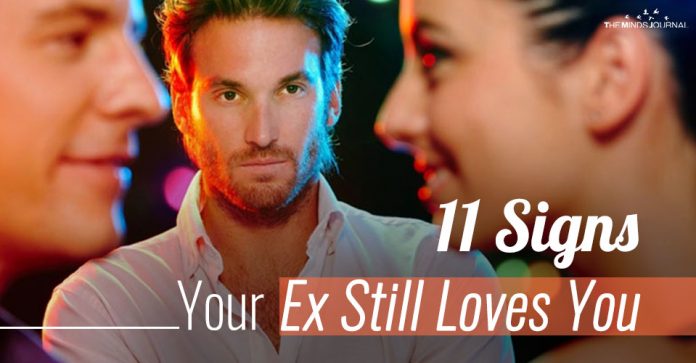 11 Signs Your Ex Still Loves You

The relationship might have ended but these signs will tell you that your ex still loves you.

“Once sailed, neither the ship nor the shore ever remains the same again.”- Shamsir Alam

Breakups are devastating experiences and one of the most painful things that happen during a breakup is that people say and do things they don’t mean.

There is anger, frustration and a whole bunch of other emotions that take over a person and makes them react in the way which they regret later. They will say they don’t love you anymore as if the love you both cherished died overnight.

Maybe they regret the decision they made in rage, may be they still love you, maybe more than ever and maybe they want to come back.

11 Signs your ex still loves you

1. He stays in touch with you

This is an obvious sign that he still loves you. Men don’t really cling to exes but if he keeps texting you every once in a while or calls you once in a blue moon for some reason, he still misses you loves you. If he craves for your attention it’s only because he loves you.

2. He keeps on talking about the reasons for breakup

He keeps on trying to explain the breakup. He keeps on texting or saying you why he left you. He brings it up even when it doesn’t make sense.

This shows that he is still not over it and is trying to sort it out in his mind. He keeps on analyzing where things went wrong and what could have happened instead. His need to keep talking about it shows that you’re still on his mind.

3. His friends try to talk to you in his favor

If his friends keep telling you about how he misses you and how you guys used to be good together, it’s probably because of his rants.

They push you to be together because they can see the love in your hearts and also they are tired of hearing him talking about you every time. If your ex still loves you, his friends will know and they leave no stone un- turned trying to bring you, people, back together.

4. He still wants to be friends with you

Taking about still being friends is nothing but the inability to cope with the loss.

Saying these words are not enough, if he genuinely wants to be friend with you, then he will dedicate time to you and make efforts to keep the friendship.

Trying to be friends with your ex can be a painful experience as the demons from the past keep haunting and not all the exes deserve to be friends, some may be toxic and you need to be careful with this.

5. His feelings for you are extreme

The more you love someone the more intense he feels the pain or anger. Below the surface of this intense anger or hate lies the love, the love that has you two attached.

During breakup people show a certain rage, the fire of anger in those moments is too extreme but suddenly they are back in love again. Anger is a tricky emotion during a breakup because what it really is- is hurt.

The anger does nowhere, in this case, indicate hurt. He feels for you extreme and no matter what emotion it is, he feels it with intensity.

6. He shows off and brags about his accomplishments

If you hear him bragging about his gains at the gym and how he is pursuing his passion which you could be proud of or how he has finally got that job, it is a sign that he is trying to make you jealous or at least take pride in his achievements.

He is trying to prove that he is changing and becoming a better man. He loves you and he knows very well that only with positive changes and improvements he stands a chance to have you back.

If he is taking too long to heal, and not dating anyone in a quest to find himself, he is still hoping to get back to you.

Breakups are devastating and they leave a certain void in life, few move on too quickly to fill that void and make a mistake in haste while few wait with a hope, the hope of love once they had.

8. He keeps stalking you on Social media

Does your ex keep on liking your post? Does he go on a grave digging spree where he comments on old posts or pictures of you?

These are signs that he still has feelings for you. He wouldn’t be monitoring your profile as if he was hired by the NSA to keep an eye on you if he didn’t still love you.

A number of his posts suddenly goes up with brags about how awesome and happy he is, just to grab your attention. It’s always better to unfriend your ex if not block because the constant appearance of his face and name isn’t going to make you feel any better.

9. He stays in touch with your friends

Men who want to move on burning all the bridges and cut all the ties from their old lives. If he still keeps in touch with your people, it is because he still loves you and wants to know what is going in your life.

Optimistic women blindly hope that their toxic relationship will become perfect one day. Optimism makes it difficult for them to leave the relationship.
Read more
wpDiscuz
2
0
Would love your thoughts, please comment.x
()
x
| Reply