Why You Should Embrace All The Feels 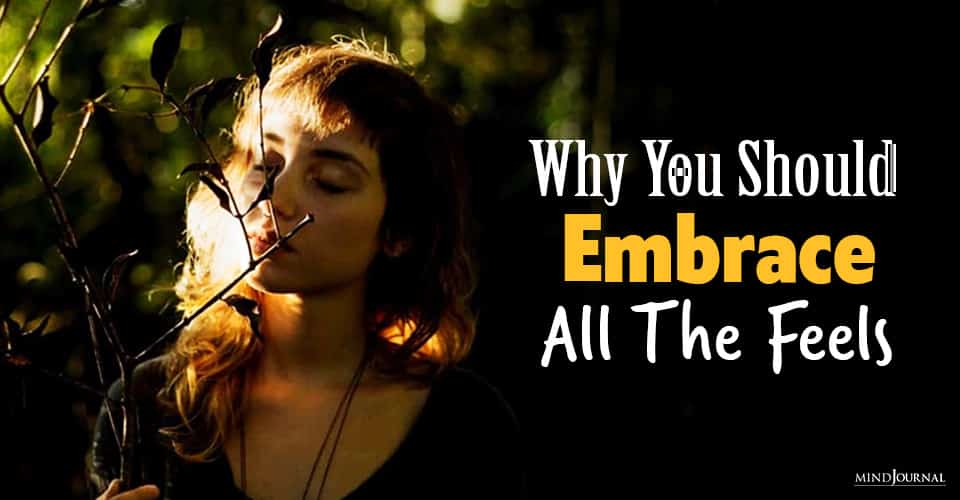 “Your emotions make you human. Even the unpleasant ones have a purpose. Don’t lock them away. If you ignore them, they just get louder and angrier.” – Sabaa Tahir. This quote perfectly encapsulates why you should always embrace all your feels, and not resist them.

This realization hit me hard the other day as I struggled to handle the return of some unfamiliar feelings – emotions.

Now at first, that might not make sense – we often think feelings and emotions are the same. But they aren’t. In doing some research, I learned that emotions are physical states while feelings are mental associations and reactions to emotions. Basically, your brain looks at an emotion that arises in your body, assigns meaning to it, and that results in a feeling. Feelings may be the effect, but emotions are the deeper-rooted cause.

Related: 10 Things You End Up Doing When You’re Repressing Your Feelings

When we don’t want to feel a certain way, we tend to repress the emotion that causes the unwelcomed feeling. Push it down, bury it, pretend it isn’t there. I did that for years. Not wanting to feel the pain of heartache, I suppressed the emotion of sadness altogether.

Because years of denying pain can lead to apathy until we no longer know what we’re missing. I haven’t felt real emotions in a long time. Surface level feelings, sure. But deep-rooted, feel-it-in-your-body emotions? It’s been a minute. Because when we numb ourselves to one emotion, it bleeds into others.

My experiences with love taught my brain to associate it with the same unpleasant feelings as sadness, to tie love to feelings of rejection, feelings of loss, feelings of heartache. So at some point, I began to deny the emotion of love as well.

We don’t get to be selective when it comes to our emotions – it’s an all or nothing game. And I was on the “nothing” side for quite some time without even realizing it.

But here’s the thing – the “all” is always there.

We may deny the uncomfortable emotions that arise in our life. We can push them back down and refuse the experience. But that doesn’t mean they go away. They stay buried inside us, patiently waiting their turn to surface. And in the meantime, they find every opportunity to remind us they’re there. They raise their hands and we’re anxious, stand up and we’re insecure, jump around and we’re depressed. And when we open the gate to let the pleasant ones free (love, happiness, joy), the unwanted ones can sneak out as well.

That’s what happened to me. One minute I felt a wave of extreme love… a pure feeling of joy I’d barely had glimpses of over the years. It was a fleeting feeling but I was still grateful it stopped by. Then later that day another emotion arrived – sadness. The dull, persistent, unmistakable, pain of heartache I avoided for so long had returned.