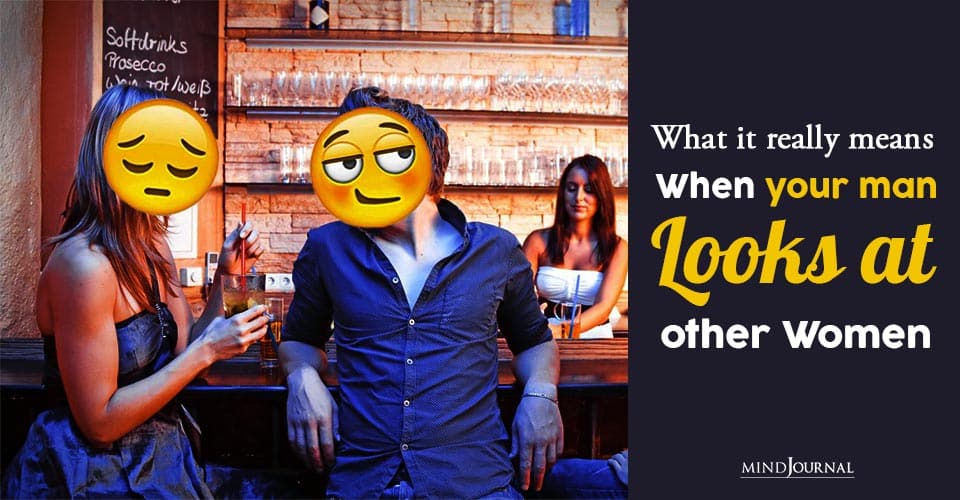 Picture this: you’re sitting with your boyfriend (or husband) in your favorite restaurant, having a wonderful night out together, when a woman walks by your table. You watch as the man you love turns his head quickly, looks her up and down, and his eyes linger just a little too long on her breasts or her backside.

Suddenly there’s a surge of emotion, jealousy, anger, pain, insecurity. A torrent of questions runs through your mind: Does he want her? Does he think she’s more beautiful than me? Is he not attracted to me anymore?

Sound familiar? That’s because it’s probably happened to every woman, at some point.

Because let’s face it, men look at women.

To be clear, that’s all men; not just your man, not just single men, not just players and cheaters, and womanizers, but all men look at women.

Take me for instance. I’ve been with my partner for nearly 4 years. I love and adore her. I want to spend the rest of my life with her. I wouldn’t dream of betraying her trust by sleeping with someone else. But I look. I can’t help but notice when a beautiful woman walks by. I can’t help but react in the way that I do, to be attracted to women with certain features. It’s in my nature. And I am not alone.

It’s completely normal for men to look at other women.

It’s also completely normal for women to have that visceral, emotional reaction when they catch their partner looking.

It’s completely natural to want to know why men look at other women, and what it means when a guy (maybe your boyfriend) looks at another woman.

Allow me to explain…

What It Means When He Looks At Another Woman

1. He finds her physically attractive.

2. When he saw her, a chemical reaction happened in his brain. Neurotransmitters like dopamine and serotonin were released, giving him an involuntary surge of pleasure.

3. Part of him wants her or wonders what it would be like to be with her, in a completely harmless and innocent way. Just like you might be sexually attracted to Denzel Washington or Channing Tatum, and wonder what that might be like… but you wouldn’t act on it.

4. In an alternate universe where he was single and unattached, he might be interested in her as a sexual partner.

Related: How To Attract The Right Relationship Partner In Your Life

What “The Look” Does NOT Mean

1. He finds her more beautiful than you.

3. He isn’t happy with you, and your relationship.

6. You should be angry at him, or jealous of her, or insecure about yourself or your body.

7. He is unfaithful, or that he is going to cheat on you.

8. Your relationship is doomed.

Simply put, him looking at other women has nothing to do with you at all. The world is full of beautiful sights – flowers and sunsets, great works of art – none more beautiful than the female body. It doesn’t take anything away from you when your man admires a painting or sculpture. It doesn’t diminish his love for you when he looks at another woman.

The look is really nothing more than that: acknowledging and appreciating beauty when we see it.

Want to know more about what it really means when your man looks at other women? Check this video out below!