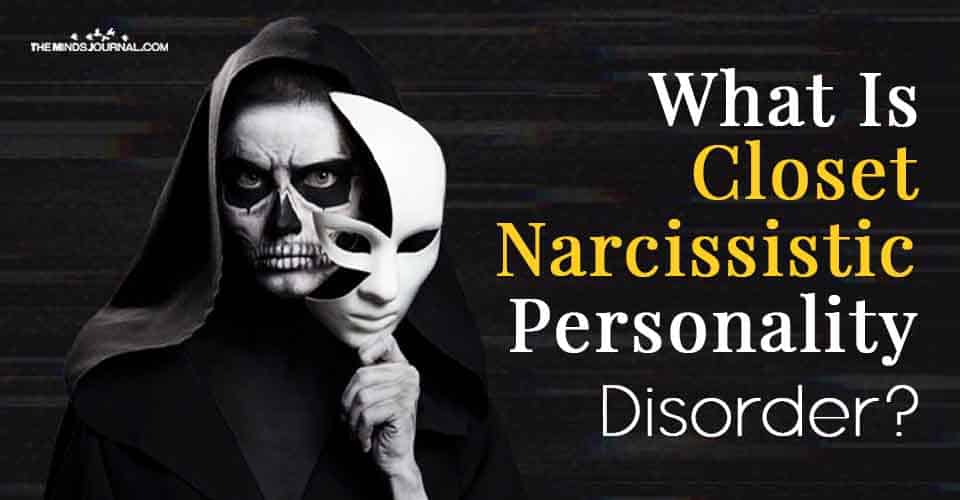 How can you recognize a person with a closet narcissistic personality disorder?

What Is Closet Narcissistic Personality Disorder? You could be living with a narcissist and not know it?
Written by Dr Elinor Greenberg

When most people think of a narcissist, they picture an arrogant, domineering person who loves to be the center of admiring attention. However, this description only fits one of the major narcissistic subtypes, the exhibitionist narcissist.

There is another narcissistic subtype that hides in plain sight because they do not fit our pictures of how someone with narcissistic personality disorder acts. Sometimes this subtype is called a covert narcissist, a fragile narcissist, or a vulnerable narcissist.

I find these terms a bit too imprecise and prefer the term “closet narcissistic disorder of the self” that James F. Masterson, the personality disorder theorist, uses in his work and describes very clearly.

Closet narcissistic personality disorder (CNPD) is one of the three major subtypes of narcissistic personality disorder identified by Masterson (1926–2010). The other two are exhibitionist and devaluing (also called malignant). Masterson’s groundbreaking book, The Emerging Self (1993), is devoted to describing the diagnosis and treatment of the CNPD subtype in great detail.

Related: The Difference Between Traditional and Hidden Narcissism

In order to recognize that someone has CNPD, you will need to spend a lot of time with the person and also understand the general characteristics of narcissistic personality disorder quite well. Despite their somewhat meek and harmless self-presentation, when you look closely at someone with CNPD, you will realize that he or she shares all the main characteristics associated with NPD:

Note: In this post, I am using the terms narcissist, narcissistic, and NPD as shorthand ways of referring to people who qualify for a diagnosis of narcissistic personality disorder.

Main Issue: Afraid of the Spotlight

According to Masterson, closet narcissistic personality disorder differs from the exhibitionist subtype in that people with this NPD variation are afraid to be directly in the spotlight.

While exhibitionists will elbow you aside to become the center of admiring attention, people with CNPD are afraid to openly seek admiration. They are too concerned that if people were to take a close look at them, they would be exposed as inadequate fakes.

Related: 8 Deep Questions To Ask Yourself If You Keep Attracting Toxic and Manipulative Partners

Most people with this variation were taught in early childhood that if they exhibited themselves for attention or openly acted “special,” they would be harshly punished or devalued. So, their basic dilemma is, “How do I get to feel special and prop up my shaky self-esteem without being open about my agenda?”

One of the common ways that people with closet narcissistic disorder deal with their conflict about wanting to be special is by attaching themselves to people, groups, and objects that they idealize as special. Then, instead of saying, “Admire me!” as the exhibitionist does, they say, “Admire this!” Then, they feel special by association.

Example: Paul wanted to feel important, so he joined a religious group that did missionary work. He was not comfortable saying “I am special,” but he felt that it was perfectly okay to tell strangers that “My religion is special. You should worship God the way we do. We have the one true religion that will save you from going to Hell.”

Many people with CNPD work extra hard to please the people whom they admire. They live for the bit of attention and approval that they get from whomever they idealize.

Example: My client Sara idealized her boss. She would stay late at work to finish any project that he assigned her. Sometimes she came into the office on weekends because she wanted his approval so badly.

Related: Ways A Narcissist Manipulates You and How To Shut Them Down

Instead of asking directly for what they want, people with CNPD may try and manipulate the situation so that the other person feels obligated to them or sorry for them. Some of this is simply due to the closet narcissist’s shaky self-esteem. Many believe that if they just ask for what they want, no one will care. They have to prepay with favors and then the person will owe them.

Example: Jennifer did big favors for her friends that they did not ask for. Once she offered her new work friend Jane the use of her cabin in the mountains for a weekend. Jane accepted and was grateful. But not grateful enough.

When Jennifer was not chosen to be a bridesmaid at Jane’s wedding, she felt cheated. She complained, “Jane owes me big time! How could she leave me out of her bridal party after what I did for her?” In Jennifer’s mind, everything was transactional. She could not understand that Jane simply took her gift of the weekend as a lovely generous gesture—not an obligation.

Most people with CNPD are not comfortable directly confronting people. Instead, they usually gossip to third parties about their grievances.

Example: Jennifer told everyone in her office about how badly Jane had treated her. When she had the opportunity, she made sure to “accidentally” let their boss know that Jane had been fired from her last job. This was something she had been told in confidence by Jane and had promised to keep a secret.

Related: 5 Signs You Are Not Depressed – But Surrounded By Toxic Assholes

Unlike people with the exhibitionist subtype of NPD, people with CNPD are unlikely to pick a screaming fight with you in public when they are triggered. Instead, in addition to spreading malicious gossip about you behind your back, they may conspicuously ignore you. If you happen to meet in public, they may refuse to acknowledge you in any way. This extends to not responding to your texts, emails, or phone calls.

Related: 5 Ways to Protect Yourself From Energy Vampires

Example: Marco was furious with his friend Jim for not taking his side in a quarrel with someone they both know. The next time they met at a birthday celebration for a mutual friend, Carlos, Marco conspicuously ignored Jim. Carlos did not know about their fight, so he had seated them next to each other at the table. Marco refused to turn his head to speak to Jim and made his dislike obvious to everyone. When Jim asked him a question, Marco made a big show of pretending not to hear or see Jim. In true narcissistic fashion, Marco did not care that his behavior was ruining the party for Carlos and the other people there.

Closet narcissistic personality disorder can be very hard to recognize. Unless you are well trained in the narcissistic subtypes, you may not even know that this particular narcissistic subtype exists. Most people who spend a lot of time around someone with this disorder just see the person as a bit insecure or annoying. Even therapists may be unfamiliar with the CNPD diagnosis because it was not included in the DSM-5.

Related: Can A Person With Narcissistic Personality Disorder (NPD) Have A Good Marriage?

It is not until you get on someone with CNPD’s bad side, and you are portrayed as an all-bad villain because you have not lived up to their expectations, that you are likely to realize that something more complex than simple dislike is behind their behavior.