7 Things You Can Say To Trigger a Narcissist’s Anger 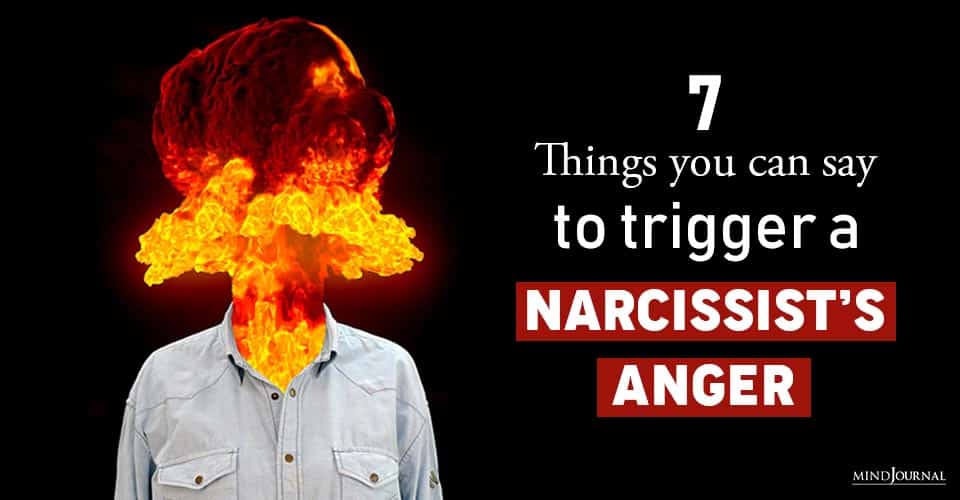 Triggering a narcissist’s anger is a skill that doesn’t require much practice, but figuring out how to avoid their ridiculously overblown reaction to anything you say, think, or feel. Well, that takes some real strategy. There are plenty of documented reasons for this, but it all begins with the fact that narcissists tend to have inflated, but outrageously fragile, egos.

If you’ve ever been in a relationship with a toxic narcissist, then you already know that there are plenty of things you can say to anger a narcissist. You can even just look at them the wrong way and tick them off pretty good, right? And my guess is that you already know how easily narcissists can fly off the handle.

And, if you’re anything like I was before I healed, you’d like to avoid this as often as you can. After all, when a narcissist is enraged, they will fling insults at you, digging deep and actively poking at the things that hurt you the most. They want you to feel bad about yourself in that moment, and on some level, they are projecting their own emotions on to you. Let me explain.

The concept of narcissistic rage plays a big part here. See, narcissistic rage is what we see when a narcissist knows they’re wrong but won’t admit it, or when they don’t get what they want, or when people don’t treat them differently or more special than others. It can also happen when a narcissist’s sense of entitlement is threatened – and basically, anytime things don’t go their way. They get inconsolably angry in an attempt to bully or coerce you into giving them what they want. And, when this doesn’t work well enough, they’ll often switch to a similar tactic where they slip into victim mode. We’ll talk more about that part later.

You might also be aware that your average narcissist is far from rational, especially when they feel insulted, belittled, minimized or in any way attacked. This can feel pretty ironic, given that they actively insult, belittle, minimize and attack the people closest to them.

In any case, though, if you’re dealing with a narcissist, you probably want to avoid saying the things that are guaranteed to upset them, at least if you want to avoid the drama and upset that goes along with triggering a narcissist’s anger.

7 Things You Can Say To Trigger a Narcissist’s Anger

Here are seven things that you can say to trigger a narcissist’s anger.

1. “I am so impressed with that skill someone other than you has that you also have…”

Complimenting someone else on a skill or talent that the narcissist is going to go over like a lead balloon, especially when you do so without also acknowledging the narcissist’s own talent. And heaven forbid you should do so without somehow implying that the other person’s skill is in any way superior to the narcissist’s (or that it isn’t actually inferior if we’re being honest). Narcissists are insanely jealous by nature because of the fact that they are so insecure.

So, if you were to ever compliment someone else for having such talent in something that the narcissist also has, that not only triggers narcissist’s anger but also makes them feel as though you have personally and directly insulted them. No kidding. Even if what you say is benign and you are not comparing them to the person you are talking about in any way. Narcissists have to believe they are the best and the very best at what they do, even if there is obvious and documented evidence to the contrary.

2. “The food at the restaurant you chose just isn’t for me…can we try something else next time?”

You can never tell a narcissist you don’t like or want something THEY like or want. I remember this exact situation with my ex. He would literally get offended when I would not enjoy the same food or movies or whatever that he did. I’d always think to myself,

“Geez, it’s not like you MADE the food or the movie or whatever.” But like all narcissists, he took everything personally. And that’s the thing. Narcissists need you to agree with everything they say, think and feel, and if you don’t, you’re wrong and also doing something they see as offensive. The narcissist expects you to follow their path no matter what – or at least the path they’ve laid out for you.