Anger And Irritability: The Lesser Known Symptoms Of Depression 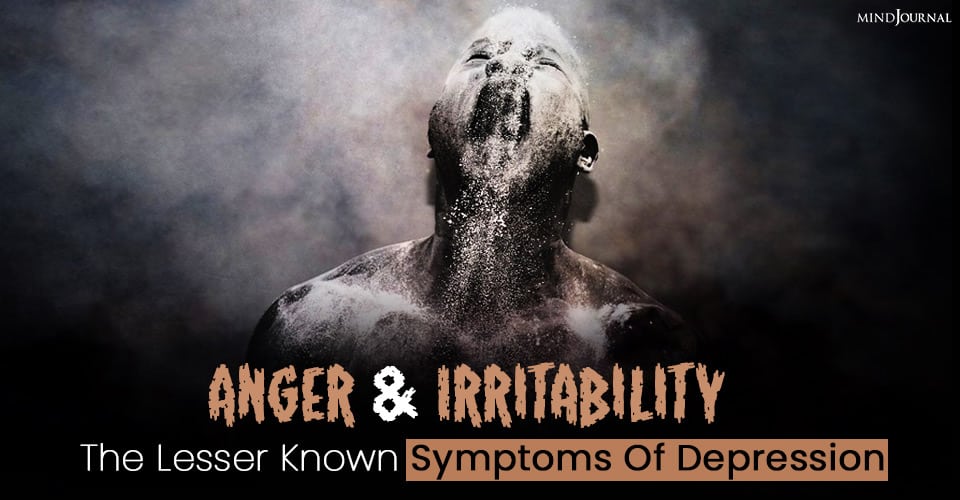 Do you know that frequent anger and irritability is related to depression? Surprised? Well, most of us express irritation or anger about every petty thing happening in our lives or around us. Being angry because your boyfriend cheated on you is quite justified. But, the same emotional reaction when you couldn’t attend your office on time or are unable to reach your friends over the phone is silly. Right?

Hardly anyone realizes that their bouts of anger or irritability -a reduced control over one’s temper that results in angry outbursts – is aligned with depression.
Why?

Information is the culprit!

According to World Health Organisation (WHO), depression is characterized by a lack of motivation, loss of interest and enjoyment, anxiety, reduced energy, loss of appetite, low self-worth, disturbed sleep, feelings of guilt, and even symptoms that cannot be explained by a medical diagnosis. As you can see anger is not mentioned as one of the symptoms of depression here.

Related: 12 Signs You’re Uncomfortable With Emotions and How To Accept Them

As evident from decades of research, the symptoms of depression vary depending on whether it is mild, moderate, or severe. Unlike mild depression, people with severe depressive episodes are unlikely to continue with work, social life, or domestic activities.

Now, referring to the Diagnostic and Statistical Manual of Mental Disorders, which is often called the bible of psychiatry, anger is not included in the list of core symptoms for major depression.

Supporting this fact, Dr. Maurizio Fava psychiatrist at Massachusetts General Hospital and a professor at Harvard Medical School said that anger is not included at all in the adult classification of depression.

However, it is mentioned as a core symptom of depression for children and adolescents. So, why it is not included for adults?

Dr. Fava wonders, if someone who loses control over temper as a child or adolescent all of a sudden stops being angry or irritated at the age of 18?

Her results indicate that if the teenager continues with aggressive behavior or substance abuse even after the age of 18, then anger attacks and consequently depression is highly likely. Though there is insufficient data in this context, it’s important for future study.

Anger Is A Neglected Aspect Of Depression

WHO states that people having depression with manic episodes (or bipolar affective disorder) show irritable mood, the pressure of speech, overactivity, decreased need for sleep, and inflated self-esteem.

Dr. Fava questions why irritation or anger is not considered as part of depression with normal mood but depression with manic episodes? Why an adult with lots of anger is said to have bipolar disorder or a personality disorder?

Two decades ago mental illness was very much taboo and it is still a taboo in some parts of the world like Asia. Be it 2000 or 2020, most people associate depression with having blues, sadness, emptiness, emotional pain but never or hardly in relation to energetic feelings like anger. We believe what we read on health care websites and diagnostic manuals that are missing anger – a byproduct of depression.

In his day-to-day life, Dr. Fava observes many patients coming to his clinic with anger issues but are labeled as having other diagnoses. The reason is people think one shouldn’t be angry if they are depressed. If the diagnosis is not right, how can one receive the right treatment?