10 Signs You’re A Perfectionist and How To Overcome 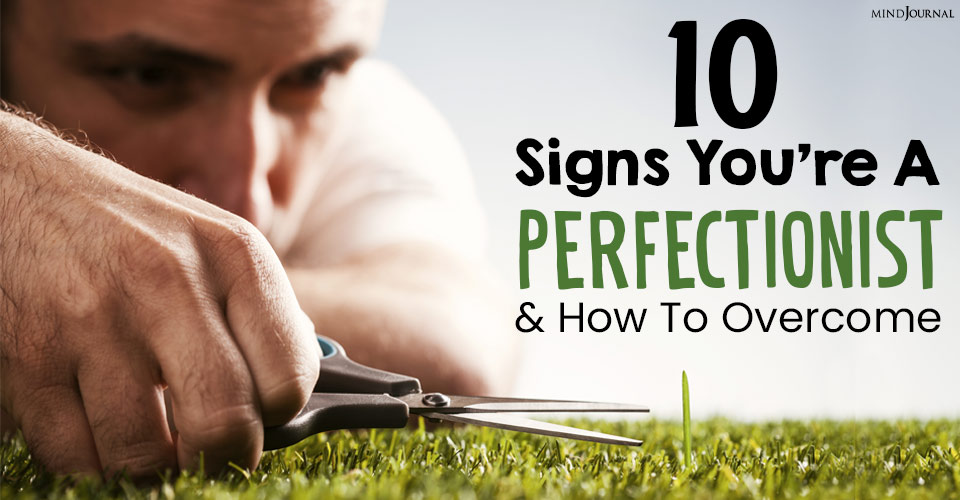 Often people mix up high achieving behavior with perfectionism. According to studies, a perfectionist isn’t really trying to be perfect. They avoid failure. If you’re someone who is dealing with perfectionism, below are the 10 signs and how to can overcome them.

I spent the greater part of my life believing that unless something was perfect, it wasn’t good at all. There was really no in-between. It was either perfect, which meant it was good, or it was a failure, which, obviously meant it was bad.

One of the problems with perfectionism is that it’s common to believe that it’s a positive thing. In our society, people tend to value it. If you’re someone that aims for perfection, you must be accomplished. Smart, even.

Have you ever had a sense of pride over being called a perfectionist?

So, what is a perfectionist? How do you know if you are one? If perfectionism is ruling your life, what’s the secret to throwing it in the backseat (or the trunk!)?

Let’s start with what a perfectionist is and how you know if you are one.

1. You Obsess Over Your Mistakes

You screwed up. So what? Mistakes are part of life. But perfectionists can’t stop thinking about what you did “wrong”. You worry that you didn’t do enough or you looked stupid.

It’s worth saying that what you did “wrong” is YOUR definition of wrong. Chances are, no one else is thinking that you screwed up. And even if they are, that’s life. Failure is part of it. It’s healthy and it helps you grow and learn.

2. Your Self-Confidence Depends on Being Perfect

There is a difference between healthy striving and striving for perfection. When you don’t reach what you deem to be perfection (which is likely a lot higher standard than what anyone else is holding you to), you feel like this says something bad about you. You feel shame, and that shame makes you feel like a flawed human. You hinge all of your self-worth on doing everything perfectly, or the external validation you get from achieving.

3. Your Thinking is All-or-Nothing

Life is all about the gray areas, but they don’t exist for perfectionists. You’ve either succeeded because you’ve achieved perfection, or you’ve failed, which is everything else. Perfectionists have a hard time accepting anything other than perfect. Average, good enough or acceptable are, well… just not acceptable.

4. You Have Unrealistic Expectations

Perfectionists set extremely high standards for themselves. Even their idea of perfect is skewed. They are skilled at completely beating themselves up when they don’t meet their unrealistic expectations, which is frequent, since the expectations are, well… unrealistic.

Related: The Key To Bliss: Let Go Of Expectations and Avoid Suffering

Perfectionists are intensely afraid of being judged for not having all of their shit together, so they put up a front and insist or project that everything is perfect, even when it isn’t. They know it, but they don’t want anyone else to know it!

6. Despite Your Constant Quest for Perfection, You Don’t Feel Even Close to Perfect

Perfectionists are never satisfied with themselves. They strive to be amazing performers – the smartest, the best, the excellent. But nothing is ever good enough for them. They never feel like they are good enough. They criticize everything they do and also have a really hard time accepting compliments.

7. You Have a Hard Time Accepting 2nd Best

Perfectionists tend to be extremely competitive humans. Much of the time they come in first, but when they don’t, they have a really hard time accepting when someone else has outperformed them. You guessed it… they feel like a failure if they aren’t the best.

8. You Feel Relieved When Someone Else Fails

This sounds so awful, but perfectionists tend to feel relieved when they see someone else make a mistake. They don’t wish for someone to fail, but it just takes the pressure off of them, almost like the bar that they’ve outperformed hasn’t been raised.

9. You Spend Excessive Time on Projects

Perfectionists tend to spend more time on projects than the average person because they are trying to get everything “just right”. They are always trying to perfect one more thing. In a perfectionist’s eyes, no matter how long you work or how hard you try, nothing is ever quite up to snuff.

Related: 8 Tips To Embrace Your Flaws And Fall In Love With Your Imperfections

Perfectionists, deep down, may not even really care about the things they are working so hard toward, but the approval for doing them is what they crave.

Do Any Of Those Perfectionist Traits Resonate With You?

At one point in my life, I had ALL of those bullet points. I wasted SO MUCH TIME doing stuff that was really irrelevant just to get approval or validation so that I could feel like I was awesome. But I didn’t ever feel even close to awesome. I always felt shitty about myself.

Sure, there were times when I did feel like I was good at something, but then I had to raise the bar. Just being good at something wasn’t enough, there was always another level to reach. The bar kept getting higher and higher, which isn’t necessarily a bad thing in people that are striving to make improvements in a healthy way, but for a perfectionist who hinges their self-worth on reaching the bar every time it’s raised, it’s not a positive.
It was exhausting.

Hello, I’m Kortney, and I’m a recovering perfectionist.
Do you want to know my secret?
I became okay with being average.
No, I embraced being average.

As a perfectionist, the word average was akin to the worst of the worst cuss words. My inner critic would say “how dare you even think the average is okay?”

As a teenager, a 20-something, and even a 30-something, my world would have come to an end if I had accepted being average. Oh. My. God.

But sometimes life has a way of making you better.

Life has a way of putting things into your path – it presents opportunities for you to grow. Everyone has these opportunities, but you have to take them.

I’ve told my story on my blog several times, so I won’t repeat the whole thing here (read Who Do You Need to Forgive and About Kortney on my website if you’re curious), but 5 years ago, my life disintegrated. The life I knew and was very comfortable in was gone in an instant. Looking back, I can see that this was an abrupt “lane-changer” that slapped me in the face (hard) and let me know that I was not living my best life.

It told me I was meant for more, and Mission Impossible-style, gave me a mission, should I choose to accept it: lowering my standards and replacing those standards with this one:

Related: #1 way to be happy according to Harvard Study

That mission that was handed to me turned into a quest to be happy with average. Yes, you heard right. Average.

Today, I am happy with the average. Do I like to do well? Sure. But it doesn’t define my self-worth.

At the end of the day, we are all just average humans. We are all the same. Humans trying to live the best life we can.

Don’t you think that if we all ditched our quest to be perfect, or better than everyone else, we’d feel a little happier? Don’t you feel like we’d all be more connected?
I do.

And if that happened, oh my God. Think of how amazing this world would be!

How does perfectionism show up in your life? What do you think about being ok with “average”? Share your thoughts!

“Believe in yourself and you will be unstoppable”
Looking for some clarity in your life? Check out my 30-Day Clarity Kickstart program HERE!

Kortney Rivard is a life coach and photographer living outside Washington, DC. As a former aerospace engineer who found herself wanting a more fulfilling life, she is dedicated to helping women who want more out of life rediscover who they really are, figure out what they want and find the confidence they need to go get it. Read more about her work at www.kortneyrivard.com.View Author posts

Feeling hopeless sometimes is okay, however when this sense of hopelessness becomes a permanent part of you, where you find it hard to be even a little bit optimistic, that's when it becomes concerning. What causes hopelessness and what can you do to feel better?

“Is it possible to die of sameness?” you wonder.

You check your phone — more bad news. The virus, the economy, the environment, politics, and the world is coming apart.

Why are you the

9 Signs You Are A Mentally Strong Person

Do you struggle with facing challenges and stressors? Or do you overcome obstacles with patience, wisdom, bravery, and creativity? What makes a person mentally strong?

Mental strength empowers us to deal with challenging situations, reduces our fear of failure, and pushes us towards achieving our goals.

In this article, we are going to explore the subtle signs you are mentally strong.

Being mentally strong can protect us against mental health issues and result in greater life satisfaction.

But what exactly is mental strength?