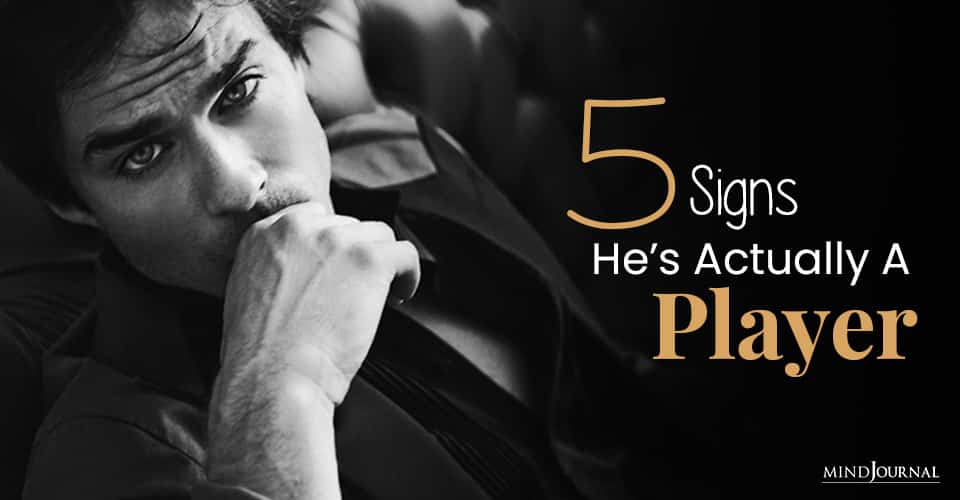 Is your man a player? First of all, what is a player? There’s a wide variety of definitions out there about what a player is but one part is pretty consistent.

A player is any guy who pretends to care about you, playing your emotions, typically, just to get in bed with you. Now, it’s not the sex that’s the real issue, it’s the lying, the false front, and the generally unsavory character that this behavior demonstrates that is the real problem.

So I’m going to give you five signs he’s a player before he does his damage. But first of all, why do guys do this in the first place?

Why Do Men Become Players?

Early on in a guy’s development, he craved the acceptance and love of his mom. It’s almost a cliché now in psychology circles. It’s a deep childhood need that we can’t seem to shake. Even worse, if he didn’t get that love, a guy is going to spend a good part of his life seeking it out.

Frankly, if he didn’t get what he needed when he was a kid, he’s going to spend a great deal of his time acting out in search of it and that’s turning him into a player.

The second reason why guys become players is they are underdeveloped.

He’s still stuck in that mama’s boy stage and he hasn’t broken out of it yet. This is the kind of guy where it’s usually a case of bad timing or that he’s never going to mature.

Related: 11 Ways To Spot A Keeper From Player In One Date: Tips From An Expert Celebrity Profiler

The third reason why men become players is that he needs validation for a weak ego.

If there’s one part of this personality of a player that stands out, it’s that the player needs validation badly and he does it by trying to get sex. He needs to feel like he’s worth something, so he puts another notch on the headboard to make himself feel better.

Some of these guys just enjoy the feeling of proving that they can do what they were born to do, which is attracting a woman. They just don’t know how to do the next part, that tricky little relationship part.

So let’s jump into the first of these signs he’s a player.

He knows how to say just the right thing to you and it’s hard to resist his patter especially when he knows just the right bit of flattery to get you to bite your lip and throw caution to the wind.

The second sign he’s a player is he is slippery as an eel. This guy knows how to evade almost any attempt to pin him down. He doesn’t leave any trail. He seems to avoid all accountability while he’s at it.

He’s also very good at hiding his phone and keeping your eyes off of all the texting he’s doing and you never really know where he is or who is out with.

He knows how to duck and weave his way out of almost any situation often with the perfect excuse. And it’s an excuse you’re going to find yourself wanting to believe more than you really believe.

Related: The Kind Of Fuckboy He Is Based On His Zodiac Sign

3. He pressures you for sex.

The player pressures you for sex. He just can’t seem to wait to get in the sack with you. If he handles it smoothly, it’s going to feel like an overwhelming lust for you that you might find irresistible and he’ll be overcome with desire.

If you’re honest, you know what, that will probably turn you on. It’s actually very appealing when a guy looks like he’s that much under your spell.

He’ll put a lot of uncomfortable pressure on you to sleep with him.

You might even want to go for it which is perfectly fine until you realize that it’s all you might get from him.

It’ll feel different than your normal lust because it won’t feel like he’s drawn to you magnetically, it just feels like one of those wham-bam-thank-you-ma’am kinds of situations. Or… maybe he’ll try to get you drunk and bypass all that messy stuff in between. He just wants to trigger you to be as impulsive as quickly as he can.

Related: How To Find Out If a Man Really Wants A Committed Relationship With You

4. It’s been more than 6 months and you haven’t met his family.

The fourth sign he’s a player is it’s been over six months and there’s still no sign of you meeting his family. If you’ve been dating this dude after half a year and you still haven’t met his mom and she’s still above ground and she’s somewhere in your part of the country, something is up.

In this day and age, he could at least Skype you two together on a video call.

A player is not going to want you to meet his family. As a friend of mine was once told that moms get tired of the endless parade of women. So he’ll keep you at arm’s length hoping that you don’t push too hard.

…And if you do push, he’ll eventually just vaporize.

5. Things between you don’t progress past sex.

Sure the boinking is fantastic but you might be mistaking sexual intimacy for love. Among my female clients, this is a very common mistake they make with men. The intensity and passion in the bedroom is often misunderstood as being a real love connection. This creates an intense feeling of, “This is it! He’s the one” from the woman while the guy simply chalks it up to being chemistry.

This is really important. Most men are able to separate sexual intimacy from the deeper emotional connection of a relationship and this creates a struggle for the woman. She feels that there’s love between them when there’s really only lust.

Now after all this talk about players, I have to warn you— and this is going to come as a shock to most women— most guys aren’t able to be players, they simply haven’t got what it takes. And, you’re only going to run into a player typically because he’s more likely to approach you and chat you up.

The genuinely nice guys, the good guys out there, well… they’re a little scared. They’re a little afraid of rejection and they’re often very shy. So, what happens is players are the ones with the balls to come up and talk to you which means you’re going to run into them more often.

Of course, if you find yourself running into guys that are consistently refusing to commit or your stay in a relationship, you have to look at the dynamics of your dating style and how it works with guys.

Sometimes because of bad information that you got from your mom or lack of good education and relationships, women will find the man she’s with growing cold and distant. It often looks like he’s a player when he’s actually not.

Men give off very specific signals that will tell you immediately if they’re a player or if they might be “The One”.

If you want to know exactly what he’s actually looking for from you, you have to know how to read his signals. Find out if he could love you forever or he’s just looking for a good time.

See what I mean here.