5 Underlying Reasons Why Players Are Mentally Unstable People To Date 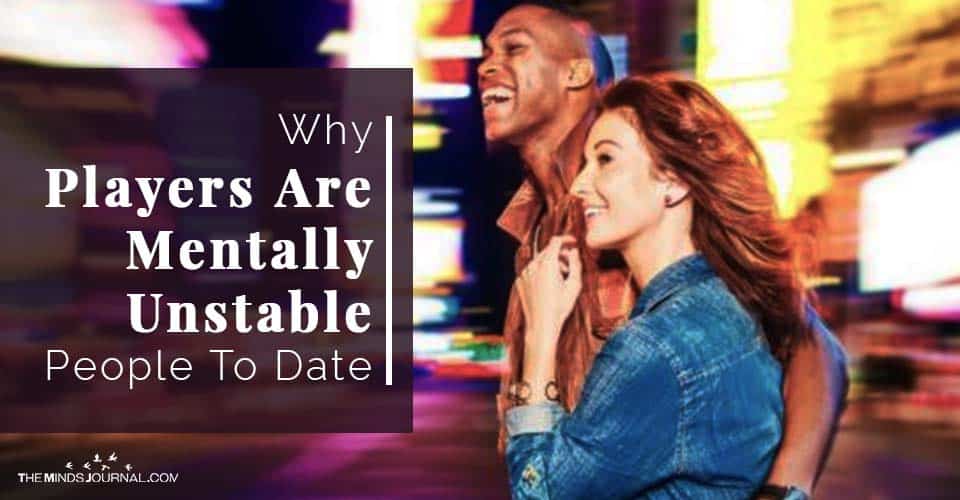 Have you ever dated a player in your past, and have ended up heartbroken? Did you know that players are somewhat mentally unstable?

Typically a player often appears to be quite a confident individual. The way they talk, the way they dress, and the way they carry themselves. It all looks very convincing – doesn’t it? But if you want to make a player fall in love with you, there’s something you need to consider. And here it is –

Even though these types of people are usually seen as balanced and popular…it is a whole different story on the inside.

Jed Diamond – psychologist and author of The Irritable Male – states that even though players seem confident in themselves they at the end of the day “very insecure” about their personal lovability. The reality is that underneath the surface, these players have wounds, issues, and are emotional. These emotional imbalances are the problems that make them players.

5 Reasons Why Players Are Mentally Unstable People To Date

Psychotherapist Jed Diamond says players typically grow up in single-parent homes where the father is absent. This has the subconscious effect of making them feel insecure about themselves and their acceptability. Sleeping with lots of different women to feel loved then becomes a mechanism or way to compensate.

Likewise, if a child does have both parents but they show little affection to him or each other, the result can be the same. Even though a woman might be a good catch, she is in the end just ONE woman to a guy who has been emotionally damaged like this which can make him go and look for more sources of affection.

Want to know more about how someone’s childhood can determine the nature of their love life? Read How Childhood Trauma Is Screwing Up Your Relationships

It is widely believed by psychologists that when people pay extra attention to their looks, it is because they are trying to compensate for other problems. The more a person takes care of their looks, embeds themselves in their career or tries to make as much money as they can …there is very often an underlying problem they are trying to compensate for. Many entrepreneurs have background stories of growing up poor. This is very often the driving force that makes them want to compensate for and become rich one day.

Players are no exception: they spend more time on their hair, clothes, and even the cars they drive than other men. These habits are telling of hidden insecurities and a longing for approval. Unfortunately, these types of people feel that no matter the amount, it is never enough. They will keep wanting more and will go from person to person to get it.

The underlying problem feeds a desire to constantly seek out new means of compensation. This is yet another sign he is not the one.

Most people have or will, at one time or another, have their heartbroken. It is a painful experience but eventually, most people get over it. So, what happens to those that don’t? The reality is that some inadvertently become players.

Many players have not worked through the feelings of heartbreak and so become stuck in stasis. They are so damaged by a past relationship that they are unable to connect emotionally with another woman and are unable to reciprocate love and affection.

Each time he becomes close with a woman and things become serious, he must leave or risk being hurt again. If this rings a bell in your situation, it might be better for you to fall out of love with him and leave …before he falls out of love with you and leaves you broken-hearted.

Want to know more about why some people leave you abruptly? Read 8 Reasons Why People Ghost Out Of A Relationship

Psychologist Nando Pelsui says that “Anything intermittent has an addictive quality for humans”. He applies this directly to the psychology of players. Even the most successful players don’t know when or with whom they will have their next tryst. It could come along with anyone at any time, depending on how successful they are. This sets chasing women up as being a game …which can have an addictive quality.

Even if a player gets a good woman, she is just ONE woman …and the addiction of the “game” will always be scratching away at the back of his subconscious.

People want to become good at things or do good things. Some work hard to have a successful career, while others focus on building a family or serving their community or country. These are all things that make people feel good because they have accomplished something.

These people fill a void in their life and no longer feel empty. But some people have a tendency to feel empty no matter what they do in life and will always be on the lookout for ways to fill that void …that can never be filled because of the way their particular psychology is made up.

So what happens to these types of people? Author of Walking on Eggshells Randi Kreger states that sufferers of chronic emptiness have a tendency not to seek intimacy, but instead constantly look for “compliments, admiration, and respect”.

The problem is that ONE woman can only provide so much of these. This is why players are often subconsciously drawn to seek out multiple women.

If you want to know more about how players are mentally unstable people, then check out this video below: