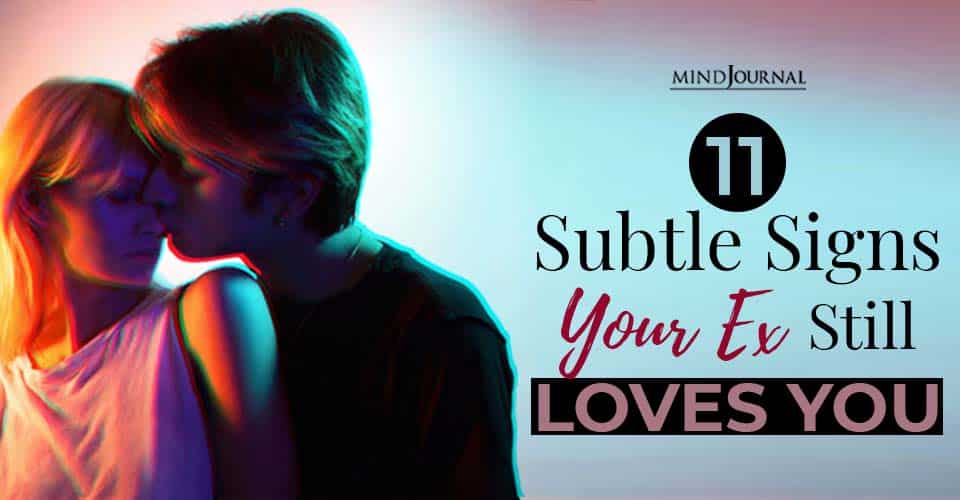 5. His social media posts are all about lost love.

You open up your social media handles and find out (if you haven’t blocked him yet!) tons and tons of sad songs, sad love quotes, links about lost love, posted by him.

If all of his posts are about lost love, heartbreak, pain and betrayal, it’s a high chance that those posts are for you – indicating your ex still oves you.

6. He is randomly rebounding.

If he is going on a dating spree, opening up accounts on random online dating apps, within weeks of a break-up, he is still not over you for sure.

People often go for rebounds when they want to move on from one’s previous relationships. And he is exactly doing the same.

Has he recently becoming more of a show-off? Is he posting every achievement of him, every activity he is engaging himself in and every single happening in his life, online?

This is a way to show you how well he is doing without you, which again means you somewhere still matter to him.

8. When you are around him, he seems to be trying hard not to break down.

Take notice of how he behaves when you are around him. Does he look lost, broken and in pain? Does his body language suddenly change around you?

If he still carries a soft corner for you, your mere presence should be enough to cut the ground under his feet.

It is actually a very loud sign that he is still emotionally affected by you. Or your ex still loves you.

9. He still uses the things you gave him.

Do you still spot him wearing clothes that you gifted him once?

Wearing clothes and using other stuff you gave him is a sign that those objects are working as a transitional object for him after he lost you.

It’s a way to remind himself that a part of you is still close to him, with him. It’s a sign your ex still loves you.

10. His friends are keeping a tab on you.

His friends, who were also your mutual friends, get a regular update on your life. They keep contacting you from time to time, to know if you are fine or if things are going great in your life. It’s another not-so-obvious sign that your ex still loves you.

They might also end up asking you if you have a new romantic interest in someone or not. These pieces of information are not for themselves, but for ‘him’!

11. He is devastated to know that you have started dating someone new.

Men are rather more competitive when it comes to mating. If he is acting weird – getting furious, fuming with jealousy, becoming aggressive after getting to know that you have found yourself a new love interest, he is surely not over you yet.

These signs are crucial for you to know because they will help you make a decision on how to handle him. If you are inspired to get back with him after you come to know about the fact that he still carries feelings for you, do it.

Awareness of where you both stand after a breakup is important and these signs will exactly help you do so.

Do you think your ex still loves you?