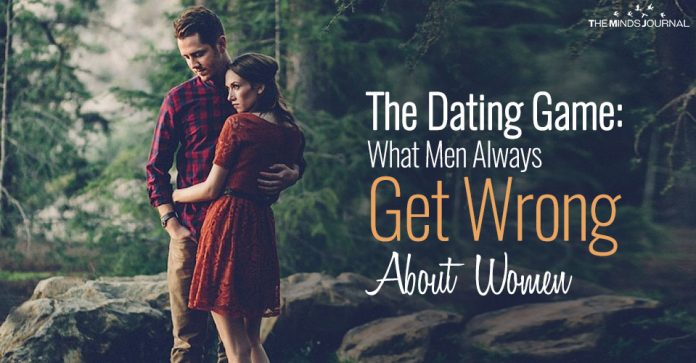 The Dating Game: What Men Always Get Wrong About Women

Dating is hard, especially for men. But it can be a lot easier if only you knew what women are actually looking for. Although it may be very complicated, it’s still not rocket science. All you need to do is dig deep and be sincere & genuine.

I was listening to the radio last week, and Mr. Deejay was talking about how his friend recently got hurt — because a girl he liked rejected him. He went on to say how difficult dating is for guys because girls are mean.

He followed that up with, “Girls if you’re not interested, you shouldn’t even be friends with the guy.”

Now that prompted all sorts of thoughts in my head, the loudest of which was: “Guys, you’ve gotta stop being so entitled. She doesn’t owe you anything.”

If you’ve ever felt unfairly treated, or confused by women in dating, this one is for you.

“But I Did So Much for Her. She Should at Least Give Me a Chance…”

Hollywood, sappy novels and even Disney movies teach us that love is difficult. That the hero doesn’t stand a chance, but still tries against all odds for that one special girl. And eventually wins her heart through some incredibly romantic gesture.

Your well-meaning friends don’t help either when they say things like: “Try harder; be persistent. Girls like persistence.”

The problem here is not romance, trying, or persistence. The problem here is the belief that guys need to do something for girls to like them. And it’s even more sinister cousin: that girls are something to be earned. So goes the belief: “I’ll do A, B and C for her, and (despite my fifty flaws and the hundred practical reasons it would never work) Sarah will like me.”

But the real world doesn’t work that way. Despite what a hundred dodgy advertisements will tell you — there’s no guaranteed way to make a girl love you. It’s not “do A, then B, and she will love you.”

Girls aren’t a computer game, where you can key in the cheat code, win, and do whatever you want.

They’re complicated humans with complex feelings. Just like you and me. And we would all do better at relationships if we started treating them that way.

“But She’s Sending Me Mixed Signals”

Of course, there are girls who purposely lead guys on, try to get free stuff from them and then act all innocent. If you’ve been manipulated before, I’m sorry bro… I feel you.

But by and large, the population isn’t out to swindle you. Girls don’t wake up every day thinking how to screw you over. Most women are just as confused as you are in the whole dating process.

A lot of times, women hurt men not because they’re bitches. They hurt you because they aren’t sure what to do; they aren’t brave enough to speak the truth and risk losing you, or paradoxically — because they really don’t want to hurt you.

And then you end up hurting yourself.

“So How Will I Know If She Likes Me?”

Yup, relationships are tough. Assuming that everyone is sincere, there’s still a huge communication gap: how do you know if she likes you? Why can’t she just be direct?

Let me take you back to the radio show. More than one person commented that “women lose either way.” If they act nice, guys say they’re leading them on. If they show they’re not interested, guys say they’re stuck-up bitches.

In this male-dominated world, do you realize how tough it is to be a woman?

So it’s really up to you my friend — to be a master of communication. Let me make this clear, so you stop behaving like an infatuated schoolboy:

You need to be brave enough to show your intentions. And strong enough to walk away when she’s not interested. Even if she is, it doesn’t mean that you’re going to get married, have three kids and live happily ever after.

All it means is she’s giving you a chance.

Don’t screw it up.

Are you someone who is their 50s, and wondering about the dating scene? Dating in your 50s is not as intimidating as it actually seems.
Read more
Dating

Beginning to like someone is one of the best feelings anyone can experience. But, sometimes you hesitate to tell someone when you like them.
Read more
Dating

If you elicit emotions in everyone you speak to, you will really make yourself memorable.
Read more
wpDiscuz
0
0
Would love your thoughts, please comment.x
()
x
| Reply