The Reason Men And Women Think So Differently. This Guy Nails It 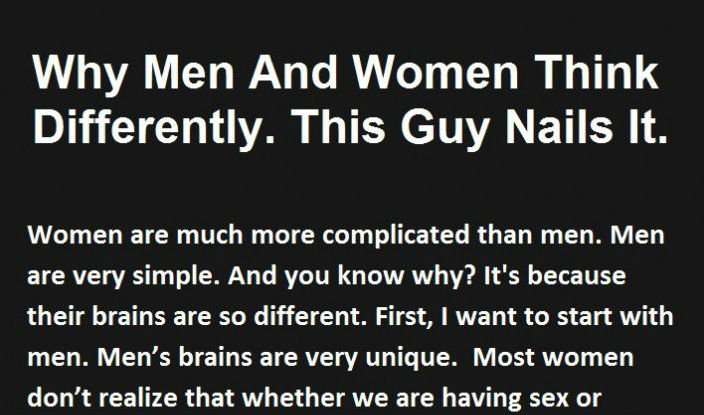 Why Men And Women Think So Differently?

It’s no secret that men and women have always had difficulty fully understanding each other. But no one puts it better than International marriage speaker and comedian Mark Gungor.

According to marriage expert and comedian Mark Gungor, men and women have TOTALLY different styles of thinking…and it comes down to the way we sort things in our brains!

And the rule is the boxes do not touch. All right?

When a man discusses a particular subject, he goes to the appropriate box, slides it out, opens it up, will discuss only the content of that particular box and then when he is done, he puts it away hoping not to touch or disturb any of the other boxes.

Now a woman’s brain is made up of a big ball of wire and everything is connected to everything…It’s like the Internet superhighway, and it’s all driven by energy that we call emotion. It’s one of the reasons that women tend to remember everything because if you take an event and tie it to emotion you can remember it forever. The same thing happens to men, but it doesn’t happen very often, because frankly…we don’t care. But women tend to remember EVERYTHING! Zzzzzzz-zzzzz-zzzz.

Men have a box in their brain that women are not aware of. This particular box, has NOTHING in it. It’s true. In fact, we call it the “Nothing” box. And of all the boxes a man has in his brain, the nothing box is his favorite box. If a man has a chance, he’ll go to his nothing box EVERYTIME. That’s why a man can do something seemingly completely brain dead for hours on end. You know, like, fishing. They’ve actually measured this. The University of Pennsylvania did a study and men can do absolutely nothing and still breathe. Women can’t do it. Their minds never stop! Zzz-Zzzz-zzzz. And they don’t understand the “Nothing” box…and it drives them CRAZY…because NOTHING makes a woman go crazy like watching a man…doing…nothing!”

These words were excerpted from one of Gungor’s most famous speeches, transcribed from the video below.