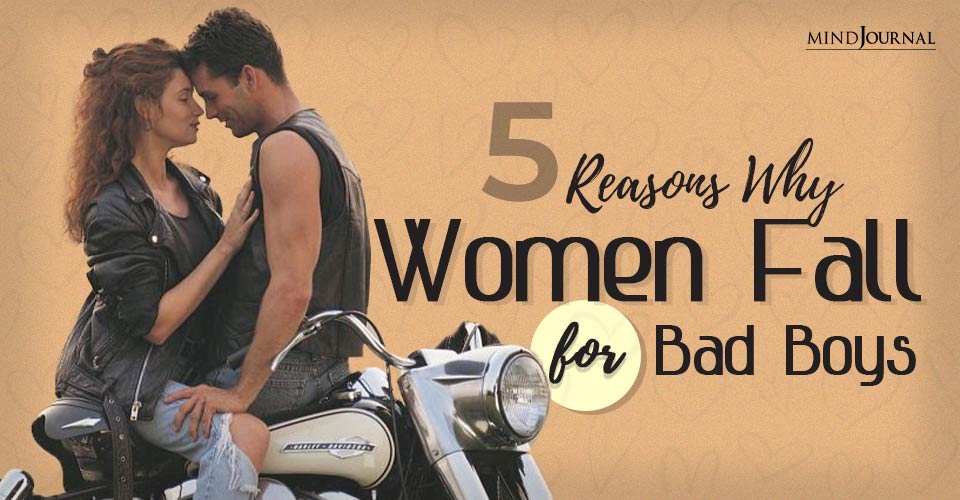 Women tend to fall for men who are charming and sometimes are bad boys. But why is it so? Well, the thing is, there are many underlying reasons as to why women love bad boys, despite knowing that they might get their heart-broken into million pieces. Explore the reasons behind why women date bad boys.

Over the years I have worked with a number of women who have been in relationships with so-called ‘Bad Boys.’ Relationships with men of this sort tend to be tumultuous and create a roller coaster of emotions. Unlike rides at the amusement park, however, this roller coaster has a nasty tendency to leave the passenger emotionally bruised and confused.

Recently a journalist asked me why women get into these relationships or put somewhat differently, what is the attraction of the bad boy?

That’s a good question. After all, developing a solid grasp on what motivates one’s attraction to a particular type of person can be the first step in making changes that lead to healthier choices.

In a moment I will describe some of the reasons women are drawn to these sorts of men. But let’s not get the proverbial cart before the horse. First, we need to take a closer look at the variety of fellows that fall into the bad boy category.

The chap with a menacing disregard for social norms and willingness to quickly escalate frustration to hostility, then hostility to threats, and finally threats to aggression. No one is certain what prompts this escalation. Lightning strikes are more predictable than his angry outbursts. But that is part of the appeal.

This is the guy who breaks all social norms and follows his own path even when it leaves a wake of chaos, heartache, and ill feelings among those who continue to care about him. His silent brooding presence causes otherwise busy people to stop and ponder what dark secrets must lie hidden below the surface.

Related: 6 Reasons Why We Are Addicted To The Bad Boys And Men Who Hurt Us

In this fellow, one finds an irrepressible immaturity that gives him a boyish charm, yet also causes him to be perpetually in trouble for minor legal infractions, or conflicts with the boss, family, friends, and just about everyone but his dog (which invariably is a sweet mixed breed with soft brown fur, white chest, and feet, wearing a bandanna around its neck).

the man about town who assures everyone within earshot that he is: A. an alpha male (Pro Tip: true alpha males don’t waste energy explicitly proclaiming their alpha status) B. incredibly, unimaginably, even indecently financially well off, and, C. expert at all things, especially those involving sports and women.

He is a rolling stone that trades girlfriends in as though they were last year’s model of Porsche. His charm pours forth effortlessly, much like the affluence of a chemical plant runoff, but it belies a wasteland of character flaws that is often more toxic.

The Siren Song Of The Bad Boy: Why Women Like Bad Boys

So what are the reasons women end up in relationships with these men? Quite a number of possibilities come to mind, but from my experience in working with clients over the years, I would say the following five stand out.

Let’s get the easy explanation out of the way first… it was a mistake. An error in judgment. The man was charming, attractive, attentive and my client, seeing the good qualities and not yet knowing of the man’s darker side, became involved. Once emotionally invested, and having established a very positive view of the man, she found it difficult to believe that the bad qualities were part of his core character.

It just couldn’t be. “Say it ain’t so” whispers the voice in the back of her mind.