How To Stop Gossip: This One Phrase Will Put a Stop to Gossip 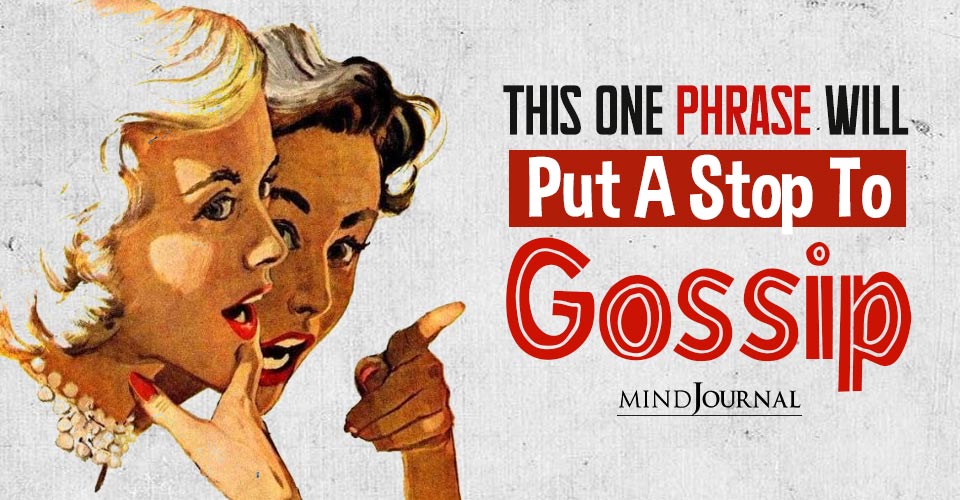 Gossip is idle conversations or rumors regarding someone’s personal matters or choices. It has no place in a sensitive society. Let’s learn how to stop gossip and its consequences.

‘Did you hear that Bill actually…’

‘That’s what she tells everyone but do you know that…’

We are prone to hearing gossip from various spheres of our lives. It is quite unfortunate but it is also the hard truth that we all have been part of gossip and we did enjoy it.

According to research, as explained in Psychology Today, conducted by a team from the University of Amsterdam, 90 percent of office conversations are actually gossip. Researchers at Georgia Institute of Technology came to the conclusion that 15 percent of emails exchanged by office colleagues among themselves are gossips.

Gossip is not limited to our workplace. We as human beings have the habit of gossiping everywhere. While doing this, we often forget the people we are hurting until and unless we do not become the victims.

Why do we gossip?

According to psychologists, human beings gossip in order to bond with others. When a dislike is shared in a group, it helps in creating a bond stronger than the sharing of similar interests.

The second reason is, gossip helps people indulge in a shared sense of humor or thrill to know about something which is confidential to another person or know certain details about someone the group doesn’t like.

This leads to the third reason for gossiping which is quite sadistic in nature. People tend to gossip because they find pleasure in someone else’s failure while in reality, they are insecure about themselves; so they need someone they can compare themselves with.

According to relationship expert, Andrea Syrtash, gossip causes harm to the one who is gossiping and the other person who is at the receiving end. When a person, say A is gossiping to B, about X and B is entertaining it too, chances are there, that A with the tendency to gossip, will gossip about B to some other person.

This is the nature of people who gossip. So, while it might be fun for us to listen to the gossip, we might never know that we are the subjects somewhere else.

So, how to stop gossiping?

This is how you can put a stop to gossip.

Psychologists say that there’s just one single phrase to stop gossip. That’s saying, ‘Why are you telling me this?’

The moment you ask the intention of the gossiper, the gossiper will stop in order to conceal their evil intentions, which they wish to carry out and take advantage of a situation or a person.

Also, it clearly implies that you are not at all interested in listening to gossip.

Gossip is extremely harmful, especially in this age with the rapid progress in science and technology. Cyberbullying has become a common crime where users, as young as school-goers have become victims.

Gossip has led to bullying, teasing, and a lot of abusive behaviors among people of various ages. People who engage in such vices and the ones who are at the receiving end suffer from severe psychological disorders that can even go to extremes such as suicide.

Gossip needs to be stopped in order to have a happy and healthy society. Just one phrase can do it.

Want to know more about the sociology of gossip? Check this video out below!

We hope that you will take an initiative to stop gossiping and imbibe positive words for people around you. Share this article if you thought it was helpful!

28 thoughts on “How To Stop Gossip: This One Phrase Will Put a Stop to Gossip”