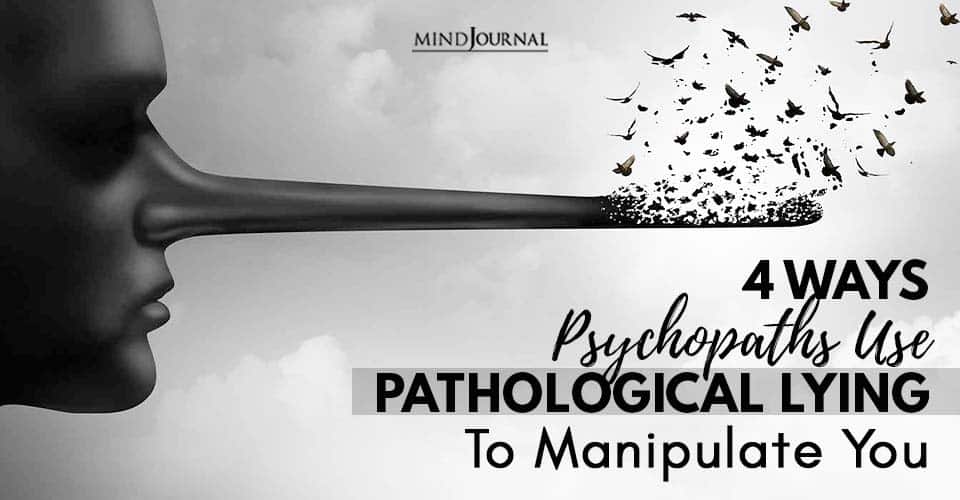 Unlike normal human beings, psychopaths lack any subtle emotions. They are driven by devious motivations and lying is their powerful tool and a source of fun and entertainment. They are hollow inside and lying only gives them shallow pleasure, which they fail to realise.

Their lying is a compulsive pathological lying – a typical characteristic of psychopathic personality disorder. It is completely opposite to normal lying that we all do when and if the situation demands or in unavoidable circumstances.

Psychopaths have no purpose in life, no mercy, no empathy for people and no regrets for their lies and manipulations. They can look directly into your eyes and speak lies effortlessly. Even when caught they can cook false stories on spot without a pinch of guilt or hesitation.

Denying is another great skill that they have. When they are caught telling lies, they will deny quite naturally and make you fool instantly. Captivated by their fake image and attempts to portray themselves as unusually honest, you will end up believing their falsehood.

Related: 8 Lies You Start Believing When An Abusive Partner Is Gaslighting You

Many of these psychopaths would never care to apologize, but many would do that frequently. But, keep in mind – their apologies are never real. Even if they apologise, they do so to manipulate you more while coming across as sincere.

Pathological liar’ is absolutely the toughest individual to deal with as a psychiatrist. Because you can’t take anything they say at face value. And you can’t, you know, fill in their personality. You don’t know what’s real and what’s not.   ―Dale Archer

Psychopaths have a wonderful clarity in their mind about what they want and how they wish to achieve it. Since psychopaths are wonderful mind-readers so they are well-aware of the in and out of their target.

Convincing you or winning your sympathy is an easy job for them. They can keep weaving tragic stories of how harsh their childhood was and how their exes and friends betrayed them or violent accidents suffered by them or how people robbed their hard-earned money, so on and so forth. Whatever they say or do, they do it with 100% confidence and flawlessly. Sure, you will feel pity for them and get trapped in their vicious games. Which, further increases the scope for more manipulation, exploitation and lying.

In most cases, kind-hearted and empathetic people are their prime targets. Because they don’t have twisted mind, they think straight and hence, quickly fall for cunningness of psychopaths and their pathological lying. Everything appears true and real to the victims. Lying and conscienceless behaviour is completely rooted in the psychopathic thought process and their actions.

Habitual liars invent falsehoods not to gain any end or even to deceive their hearers, but to amuse themselves. It is partly practice and partly habit. It requires an effort in them to speak truth.  –  William Hazlitt