Habitual Liars And Their Agendas 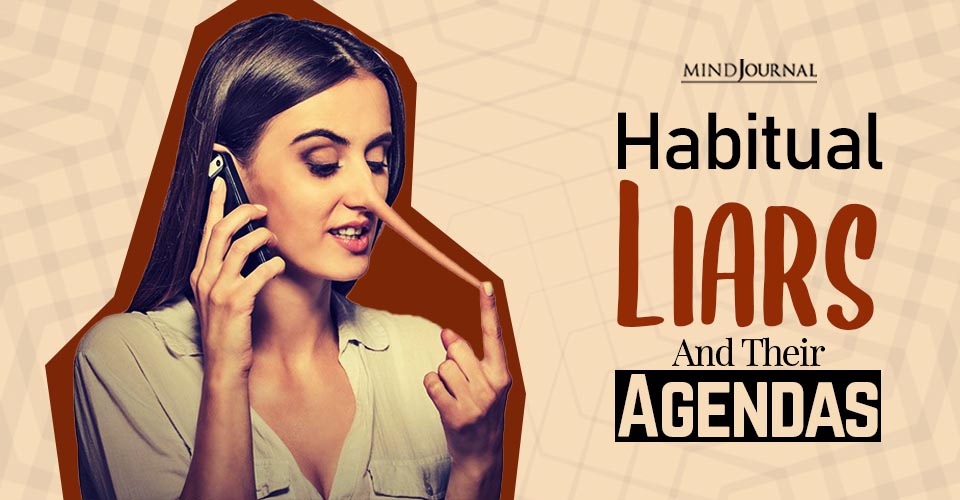 Habitual liars lie to feel better about themselves and more confident in general. Almost always they have an ulterior motive and personal agenda for lying and deceiving other people.

Some disturbed characters are habitual liars.

They habitually deceive not only others but also themselves.

And they lie about many things. Moreover, some lie so frequently and so ardently that they even come to believe their own lies. Habitual liars can eventually lose appreciation for what’s real and what isn’t.

Habitual lying severely interferes with sound character development. That’s why habitual liars are among the most seriously disordered characters. And folks who “con” repeatedly and with apparent passion and conviction can cause others to experience the gaslighting effect. (Victims of “gaslighting” feel “crazy” because in their hearts they know something to be true but their manipulator’s antics and tactics make them doubt)

Related: Top 9 Important Things You Should Know About Liars

Some habitual liars are what many call “pathological” liars. That’s because they lie for no apparent reason. They’re untruthful even at times when the truth would suffice or might actually serve them better. Because they were perplexed by its senseless irrational character, some researchers have regarded this kind of lying as a type of mental illness or even insanity.

But these liars are not insane.

Rather, they belong to a group of the most severely disordered characters among us (i.e. psychopaths, sociopaths, etc.). And they’re perfectly rational. There’s a “method” to their apparent “madness.”

Manipulators don’t want you to know what they’re really all about or what they’re up to. It’s as simple as that. They lie to keep one-up on you and a step ahead of you. Of course, they lie for other reasons, too. But mainly they lie because it gives them an advantage or an edge.

If you knew what they were really like or really doing the “playing field” would be level. You’d also have a better chance to properly take up for yourself. Manipulators don’t want that. They’d rather you be in the dark and second-guessing. They deceive simply to take advantage of you.

The Psychological Toll Of Deception

Hundreds have told me stories about relationship partners who led “double lives.” They eventually exposed these partners for the disturbed characters and frauds they really were. But that was only after they found their bank accounts were already cleaned out. Or perhaps they brought to light affairs that were going on for years. Maybe they finally proved false the many stories they’d been told.

Victims of such duplicitous behavior often wonder how they got “duped” for so long. Were they too swayed by their partner’s charm to see the truth about them? Was their partner really different in the beginning but changed somehow and for some unknown reason? Worse, they even wonder if they might have played a part in bringing about a change.

Related: How To Spot Manipulation

The Truth Is Sometimes Hard To Fathom And Accept

Manipulation victims rarely consider that there are simply some people who by nature won’t allow the vulnerability essential to an equal partnership.

Right from the beginning, such folks are all about the business of position and impression management. They’re forever scoping out opportunities, exploiting vulnerabilities, and seeking advantage. A victim’s guts might churn at all the “red flags.”

But they tend to discount their instincts and feelings. That’s because they find it unfathomable that there could actually be people like this. They can’t imagine a person so hell-bent on maintaining a position of advantage that they carefully cloak their true nature and agendas.

Realizing and accepting the truth can be painful in itself. Many victims struggle with shame, guilt after learning how badly they’d been conned. Sometimes, they even question their ability to make good judgments. Surviving a relationship with a habitual or pathological liar can leave you feeling both unnerved and confused. But when you understand the nature of character disturbance, things get better.

Moreover, once you accept that some folks simply lack the capacity (or willingness) to relate on equal, respectful terms you can reclaim a sense of personal integrity and self-respect.