Mono No Aware: The Japanese Awareness Of The Impermanence of Things 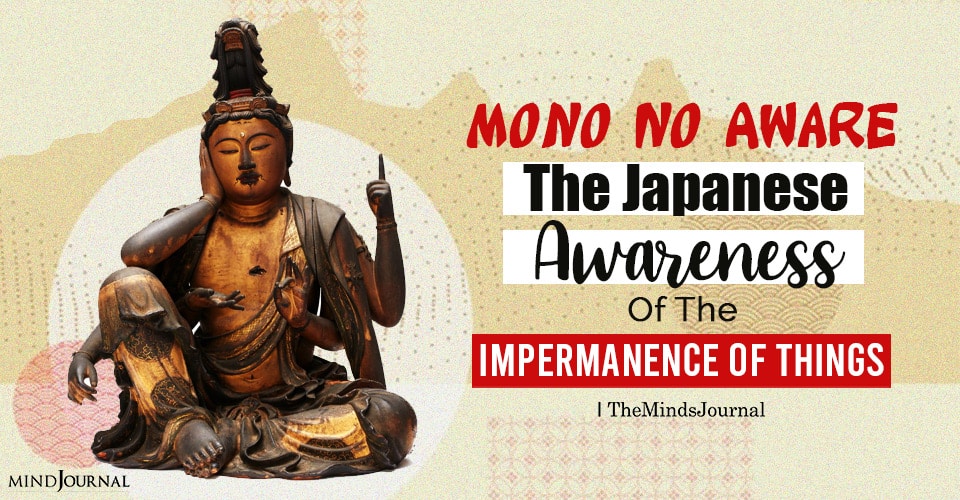 The Japanese term Mono No Aware urges us to realize and appreciate the impermanent nature of things and cherish the beauty of transience.

What is mono no aware?

Rich with meaning and subtlety, the soul of Mono-no aware is often difficult to successfully describe in words. However, the almost untranslatable term refers to the melancholic realization that everything is temporary. It is the awareness of the fleeting nature of things. Literally translated to “the pathos of things”, it means an empathy or sensitivity towards things that transient and last only for a short period. This Japanese phrase for awareness of impermanence involves both feelings of joy and sadness as this is the truth of life.

Whether it’s the changing of seasons, the fading of youth, or the impermanence of love, all things should be cherished for their transitory nature instead of being mourned. When we learn to do that, we learn to appreciate the true beauty of everything.

Mono No Aware can be best explained as “the ephemeral nature of beauty.” It refers to the subtle bittersweet feeling you experience when you are aware that nothing is meant to last forever, no matter how good or bad. It is characterized by our appreciation and heartache of the transient nature of things, people, love and even life.

Read Mushin: How The ‘No Mind’ State Can Help You

Although it loses some of its true essence in translation, the literal translation of the term is “the pathos or sadness of things.” According to Japanese culture, the term ‘Mono’ refers to ‘things’, ‘aware’ refers to sentiment or feeling, and ‘no’ suggests the essence that something possesses.

Hence, mono no aware signifies the profound emotions certain things can evoke in us. It is linked to a touching feeling of temporariness, like everything in nature and the universe, that is both sad and beautiful.

This empathy towards impermanence is a feeling of wistfulness about the reality of life. Often referred to as “the ‘ahh-ness’ of things,” it is a gentle sadness that engulfs us as we realize the evanescence of love and life. When we become aware of the impermanent nature of things and life, we gain a greater appreciation for their beauty while feeling a deeper sadness at their fading away from our lives.

Tim Lomas, a researcher in positive psychology at the University of East London, explains “The term was coined by Motoori Norinaga, the eighteenth-century literary scholar.” {1} Norinaga observed that this emotion or mood held a crucial place in Japanese culture as it captured the pathos or sadness gained by being aware of the impermanent and fleeting nature of life.

Origins of the term

The term mono no aware originated during the Heian Period (794-1185) in Japan and was heavily influenced by Buddhist philosophies. The word, which denotes the fleetingness of material and carnal life, was widely utilized in Japanese literature during that period.

It is believed that the term ‘aware’ was initially used during the Heian period to express inarticulate and spontaneous feelings, such as “wow” “oh” or ‘ahh”. It is that feeling which has a strong impact on us in an involuntary yet immediate manner before we can actually express it in words.

However, the term was not widely used until the 18th century when Motoori Norinaga, a Japanese cultural scholar in the Edo period utilized the term in his literary criticism of The Tale of Genji. Eventually, the term became widely popular and became a key phrase in Japanese culture and tradition. According to Motoori Norinaga (1730-1801), understanding mono no aware requires us to recognize the essence and power of everything in nature and in the universe, “not just of the moon and the cherry blossoms,” and be moved by every little thing. {2}