Narcissists And Selective Memory: A Manipulation Tactic To Gaslight You 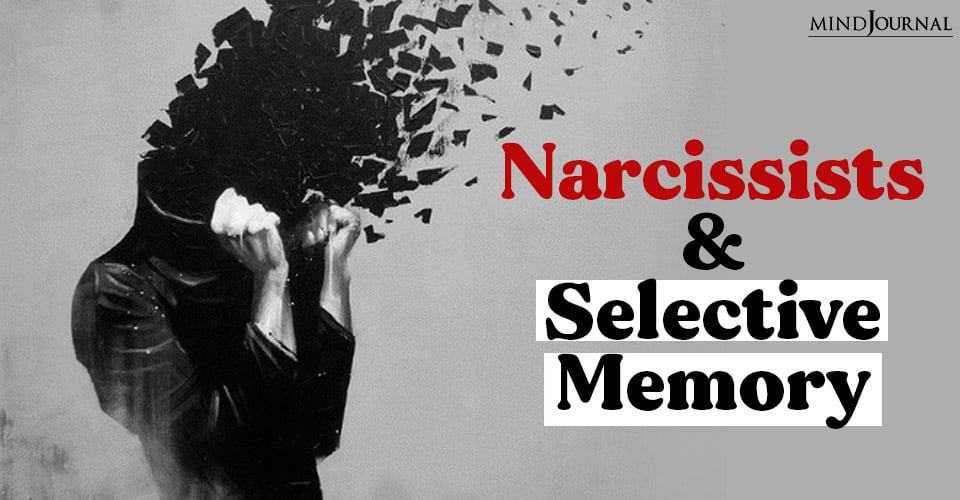 Have you ever dealt with a narcissist who seems to conveniently forget things that are important to you, but who never seems to forget that time 10 years ago when you stepped on their toe or said something that hurt their feelings? Do you think a narcissist has selective memory?

Someone who would be very forgetful when they promised you they’d do something that mattered, but who would never forget if you even looked at them cross-eyed? How did that feel to you?

Maybe you worried that they were losing their memory or started Googling stuff like “early-onset dementia” or “convenient memory loss.” Or, if you are still in a relationship with a narcissist, whether they are a parent, spouse, partner, friend, or coworker, and you are noticing that their memory seems to be going south, then you might be wondering about this right now, at this moment.

If your toxic relationships look anything like mine did, you might find this to be especially poignant when you think back to incidents where the narcissist said they’d take care of something, but pretended to forget that they made such a promise.

Later, they’d end up blaming you for being irresponsible. For instance, the narcissist in your life may have told you that they were going to take care of the grocery shopping on Wednesday. But then when you go to cook dinner on Wednesday night, they’re offended when you ask what happened with the groceries.

At that moment, rather than taking responsibility and acknowledging that they forgot or chose not to do the shopping for whatever reason, they might accuse you of forgetting to do the shopping. And when you remind them that they said they were going to take care of the shopping, they get angry and deny having said that.

Despite the fact that you know for sure they said it, they will insist that you’re mistaken, and narcissistic rage will ensue as they give you a good “dressing down,” reminding you how scatter-brained and flaky you tend to be. By the time this emotionally draining exchange is over, you’ll find yourself wishing you’d just done the shopping yourself – and you never ask them to do it again.

Of course, if we’re being honest, this was the narcissist’s desire all along – to avoid the responsibility of bringing home the proverbial bacon and then frying it up in a pan part – but as always, they’ll expect you to serve it up to them with a smile if and when they want it, regardless of your own state of wellbeing and ability to drop whatever you’re doing and take care of their many demands in any given moment.

But I digress. Now, here is the question you have really been wanting to ask.

Do Narcissists Really Have Memory Problems?

Yes, and no. It’s complicated – and there are a couple of different possibilities here. Let me explain.

First, it’s important to remember that, as much as they make us doubt it, narcissists are technically human. And all humans seem to have a certain amount of bias as well as selectiveness in both their perceptions and their memories.

For example, you know about confirmation bias, right? That is where someone will only notice or remember things that confirm what they already believe. And we all know how nostalgia can lead to a convenient “forgetting” of the bad parts of life – for example, when a woman has a baby, we don’t focus on the gross, painful parts of giving birth, but we do focus on how amazing it was that we managed to have a baby. The truth is that, in this case, humanity might be in serious danger of extinction if it was any other way.

Even survivors of narcissistic abuse will find themselves dealing with what might be called nostalgia-based selective memory – but we call it “abuse amnesia.” That is what happens when we are away from the abuser in our lives for a while and we start to forget all the bad parts of being in a relationship with them.