My Husband Didn’t Settle For A Fat Wife 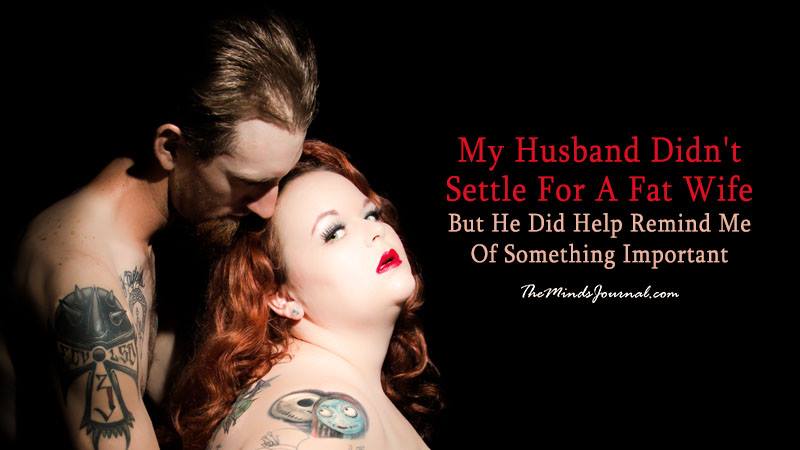 Beauty comes in many shapes and being a plus-size is beautiful.

While losing weight and keeping it off is difficult, it is neither impossible nor unreasonable. But what is unreasonable is the constant stigmatization around being fat and its acceptance among small group of people. Keeping fit is definitely a healthy goal but it never gives anyone the license to be judgemental about plus-size people.

Most humans are taught from a very young age that in order to be worthy of a fairy-tale ending, we must remain as thin as possible. The social image of a beautiful, alluring woman is always depicted in images of skinny women, in half clad clothes. Beauty has a new name – size zero.

It’s likely why we don’t see plus size women with thin men in our media streams, because thin, conventionally attractive dudes should only be paired with thin, conventionally attractive ladies. This concept is also prevalent in cartoons as we never see a plus size animation princess riding away with prince charming. There are no Rebel Wilson’s starring in films alongside Brad Pitt as the love interest. Fat bodies go with fat bodies; thin bodies go with thin bodies. And that is all.

Related: 5 Reasons Why Your Husband Won’t Divorce You, Even If You Are Both Miserable

Most of us can agree that first world cultures tend to perceive plus size people as second class citizens who should hate their bodies.

We’re constantly bombarded with weight loss campaigns, commercials for slimming pills and surgeries, and mocking by fat-phobic groups like Project Harpoon and Thinner Beauty. Sadly, these means that when a lot of plus size individuals are approached by a conventionally “good looking” counterparts— both in real life and on-screen — it can be difficult to believe that the attraction is legitimate. In situations like these, compliments are mostly regarded in very suspicious grounds.

But I know that self-doubt and self-loathing based on other people’s perspective of your body weight is very toxic to a relationship, especially the relationship with our own self. My conventionally hot husband taught me this.

The first few months of dating this handsome man were filled with insecurities and doubt on my part. This guy was gorgeous, and not just by my standards, but by society’s, and I couldn’t help but question his motives. What was he doing asking me out? Was he just experimenting with a big girl? Was this like that movie thing where the hot guy asks out the “pig” as some kind of cruel joke? I wanted to believe that I was “on his level” — that the interest was really there. But doubts implanted into my psyche by our culture would creep in, destroying any confidence I had once felt.

Once we started dating, I never felt worthy of him. I was always so insecure. My body size always gave me feelings of losing his attention to some other ‘conventionally attractive women’. Was he checking out that thin blonde walking by in the sexy heels?

Was I the largest woman he had ever been with?

These stream of negative thoughts were only fueled by the way others viewed us when we were in the public. I could literally feel the disapproval, purely written on their facial expressions and under-breath comments cast in our direction. We were clearly considered an odd couple.

I finally plucked up the courage to confront my husband as I could no longer bear the string of thoughts running in my mind. The combination of rage, surprise, and outrage that came from him was palpable.

It had never even occurred to him that people were judging us, and he was flabbergasted at the thought that I had perceived myself as less than beautiful.