How Empaths Are Trapped in Relationship with Sociopaths 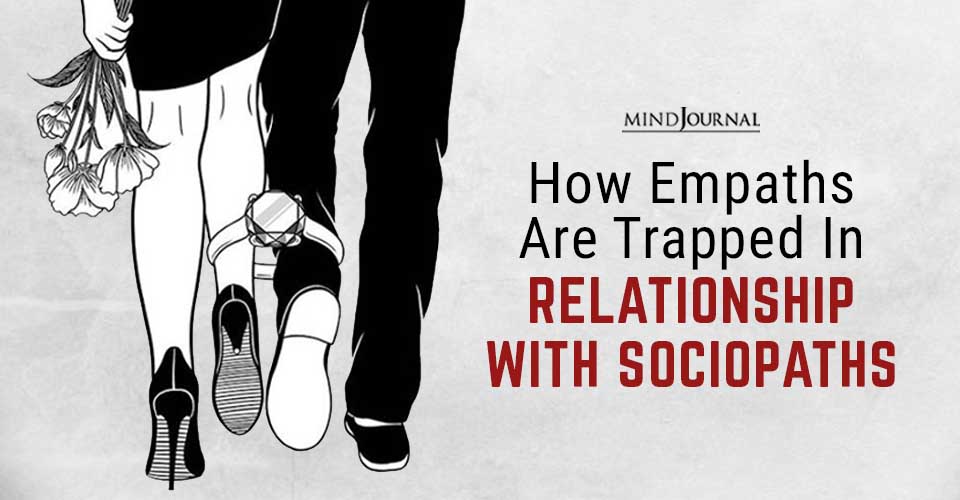 Sociopaths lack empathy. This is why they often target empathetic people by hiding who they truly are and manipulating them for their own self serving purposes. Let’s take a look at how sociopath relationships exploit the empaths.

Sociopaths trap empaths by pretending to be charming, innocent, loveable and insecure. They pretend to be broken and devastated and hook empathetic people by deceiving them. Empaths, believing, they can heal them, become easy targets for the psychopathic and narcissistic sociopaths. However, a relationship with a sociopath always ends with the empath being manipulated, broken, abused and exploited. Licensed clinical psychologist and author Seth Meyers, Psy.D. explains “The sociopath typically emotionally destroys those who are close to him or her.” He adds that empaths suffer in sociopath relationships because they are responsible individuals who have “actual human feelings that stem from a deep sense of social obligations to others, a moral anchor that is supposed to be part and parcel of having relationships.”

As the sociopath lacks empathy and emotions, the relationship quickly flips upside down from the empath giving attention to the sociopath, to the empath needing attention from them. Even before they realize anything, the empath loses their sense of self -worth and self-esteem to a person who completely lacks conscience.

Empaths are easy targets for sociopaths

Sociopaths often target the empath as they are highly perceptive, can empathize with others’ emotions, and express emotions in a healthy manner. Studies during the 1990s found a positive relationship between emotional intelligence and empathy. As empaths are highly compassionate, they are sensitive to the emotional problems of others. Jane McGregor and Tim McGregor, authors of The Empathy Trap, write that empaths have difficulty in understanding a lack of compassion in others. This is why they get trapped in sociopath relationships without realizing how it may affect them.

The authors explain “Very highly empathic people can find themselves helping others at the expense of their own needs.” They add “Problems arise for empaths, however, when there are apaths in the vicinity.” Sociopaths target empaths because they are their polar opposites and pose a big threat to their toxic existence. Weirdly enough, empaths are the greatest foes and the strongest attraction for sociopaths. The sensitivity and response of empaths provide a source of entertainment for the sociopaths, which they can abuse later.

What starts as a beautiful, loving relationship quickly turns into an abusive one. When they first meet, the sociopath shares their fabricated sob stories with the empath to make them feel sorry for the narcissistic psychopath. They tell how they were abused by their ex, how emotionally broken they are. How insecure and afraid they are of love and how unfulfilled and unhappy they have been until they found the empath. These sob stories are delivered in a way to make the empath fall in love with the sociopath, even if the empath doesn’t find them attractive to begin with.

Being naturally compassionate and caring, the empath feels a strong sense of empathy to help and heal the disguised sociopath. And so they move one step closer into the trap and lower themselves down to lift the sociopath. But this rarely ends the way they had envisioned. Initially, sociopath relationships appear perfect. The constant appreciations, attention, love bombing and the positive energy makes the empath feel happy that they are changing the life of the sociopath for the better. Eventually, the empath begins to mistake their kindness and compassion for them as love and becomes obsessed with healing the sociopath’s insecurity.

How the tables turn

Sadly, sociopath relationships are nothing but manufactured illusions. What empaths fail to realize is that insecurity was never the real issue for the sociopath. “If you’re the female partner of a man who tends toward the insensitivity or callous end of the psychopathic spectrum, be prepared for rough times ahead. His inability to empathize with you may only make you retreat further into yourself,” explains Susan Krauss Whitbourne, Ph.D., an author and Professor Emerita of Psychological and Brain Sciences at the University of Massachusetts Amherst.

Sociopaths hook empaths with sympathy. Due to their natural instincts, empaths perceive these psychopaths as innocent souls who need to be built up. The problem with empaths is that whenever they sense insecurities, the first instinct is to cure it with love, care and compassion. Psychopaths, on the other hand, are always ready to abuse insecurities and manipulate it for their own benefit.

Read also: The Empath And The Wounded Narcissist

During the initial phases, sociopath relationships allow the empaths to build their sense of self-worth from making their seemingly miserable partners happy. As they become increasingly hooked, empaths become obsessed with helping sociopaths and filling their lives with happiness. This strengthens the bond between them and builds trust and love. They can go to any and all lengths to make the sociopath feel loved and taken care of and all they receive in return is false overwhelming appreciation.

However, before they can realize, the situation changes at the blink of an eye. And soon the empath finds themselves vying for the sociopath’s attention. The empaths become desperate for their appreciation and approval as it builds their self-esteem. As the sociopath slowly begins to reveal their true selves and show how unimportant the empath is in their lives, the empath begins to feel increasingly insecure, unattractive, stupid, worthless and needy.

This is how the empath becomes addicted to the approval and attention of the lying, deceiving and manipulative sociopath.

Read also: Why Empaths Attract Abusive People And How To Stop It

Eventually the empath begins to realize the truth. They begin to see all the abuse and the dismissal of their self-worth. As empaths learn to walk away from sociopath relationships, it becomes a battle for them to rebuild their self-esteem. Not only do they have to detach themselves from someone they believed they loved, they also have to come to terms with the truth – that they were cheated and manipulated. They have to accept the fact the romantic encounter was nothing but a lie. However, the greatest challenge for the empath is to rebuild their sense of self-worth from scratch.

However, as the empath begins to recover and heal emotionally, they become stronger than ever before. They begin to realize that their self-esteem depends on themselves and not on the approval of their partners. As the toxicity and negativity begins to disappear, as the broken heart begins to heal, the empath begins to redefine themselves. They begin to realize that only they can create happiness in their lives. They realize that it’s okay to be compassionate and kind, but it’s never okay to sacrifice yourself to lift someone else up. They realize they are not responsible for someone else’s happiness, but only their own.

28 thoughts on “How Empaths Are Trapped in Relationship with Sociopaths”