The Honest Truth About Life After A Toxic Relationship 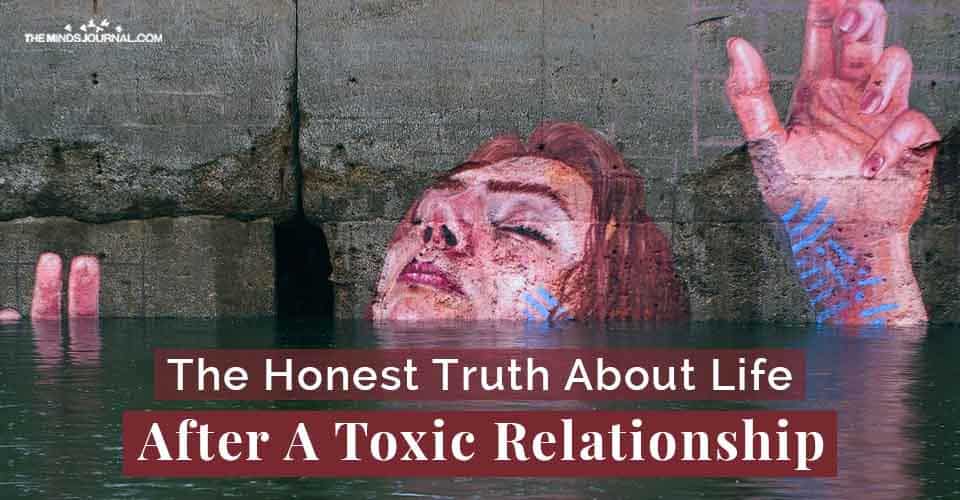 Life After A Toxic Relationship…

People often associate those in toxic relationships with someone who is weak. Someone who doesn’t have enough self-respect to walk away. Someone who is tolerating a lot less than they deserved.

But as someone who lived through the turmoil of the ups and downs and endings just to begin again, I look at myself as really strong. Strong for coming out on the other side. Yes, a bit tainted but no one walks through fire not getting burnt a little.

I thought I was strong for hanging on so long. Strong for believing in someone and respecting my own feelings enough to not walk away. Strong for loving someone that much.

Love underneath the ashes and the chaos we created in each other’s lives. Because maybe it wasn’t just him that was toxic. I think more than that, I was toxic to myself for continuing to run in circles I knew would lead me to the same place.

The truth was, it was him that ended it. I would never give up on him. I would have kept trying. I would have tried until I completely self-destructed. And in time I did.

He was like some drug and every hit took me to this high and I always came back wanting more. I don’t know much about drugs but I know people can be as addicting as any hard substance.

That’s all an addiction is, trying to find comfort in the same thing that’s destroying you.

He said goodbye one night and it didn’t even hurt anymore. I was completely numb to it. And that’s what was so scary about it. I had been hurt so many times it didn’t even faze me anymore.

Related: Is There a Toxic Narcissist in Your Life?

But the hard part wasn’t the ending. It came with a thank you on his part because I think he finally knew what he put me through.

There was no doubt I loved him and I would have done anything to make it work. In fact, I had. I invested time and energy into something that would end in complete destruction but I still fought for it. I fought like hell for him.

But it was a toxic relationship.

It was a relationship full of mind games and doubts and questioning every move I made and every word I said. It was every fight always ended in me apologizing and it somehow always being my fault. It was saying things just to piss each other off and knowing exactly how to.

But then it was the good stuff too. It was the nights together where I wanted time to freeze in that moment. It was every bad day he was the one I knew I could turn to.

It was with a simple look and a short phrase he knew something was up and he knew just to hold me. The honest truth was he knew better than any person in my life and I loved him for that.

It was every day waking up to his texts and every conversation ending with I love you. I don’t know if he knew how in love with him I was. But even with the bad stuff, he set this template for everything I wanted in a person.

And I know that sounds crazy. How can a toxic standard be the one I had? But the truth about toxic relationships is they aren’t all bad all the time. There’s a reason people tolerate the bad stuff.

But it ended and I moved on.

Related: The Pain of Loving Someone Who Is Toxic for You

After A toxic relationship

But in everyone, I dated I looked for a piece of him there. Every date I’d sit across the table and think about him. He ruined dating for me a bit after that because even after it ended, he still consumed so much of my heart.

Then there were the negative effects a toxic relationship had on me. I questioned everyone’s motives after that. Every new person I expected there to be some catch. Some chick on the side. Some fight that would lead us to make up again and run in circles. I expected to be treated bad.

Until I realized normal relationships aren’t screaming and fighting and royally fucking with you. I began to be treated like I deserved and I’d run from it. I began to meet really great guys and I pushed them away.

Related: The Pain of Loving Someone Who Is Toxic for You

Then I began to search for other toxic relationships to fill this sick void and get that hit I needed. And when I found people like these, all that happened was an ending of me crying myself to sleep, same story different guy. But there was something painfully comforting about what I was used to.

Watch this video to know the difference between healthy and unhealthy love:

Life after a toxic relationship is like recovery in a way.

You have to admit to yourself there’s a problem and it isn’t something to be fixed in a partner. It’s something you need to fix within yourself first. Then you need to be able to identify it and step away from anyone or anything that will bring you back to that self-destructive path.

You have to build yourself up in such a way that even when you’re tempted you don’t want it. Because you understand the effects it has on you.

I sat across a coffee table looking prettier than I had ever in the time he knew me. And he grabbed my hand and looked me deep in the eyes. He told me I never looked more beautiful. And the honest truth was I felt nothing for the person sitting across from me.

I looked at him and knew maybe we weren’t meant to be, in the forever sense I hung onto so long as an adolescent. There was a bitter sweet moment that came with that followed by a feeling overcome with peace.

And it was only after not getting what I wanted did I finally get what I deserved.