Heavy Lies The Crown Of A Narcissist 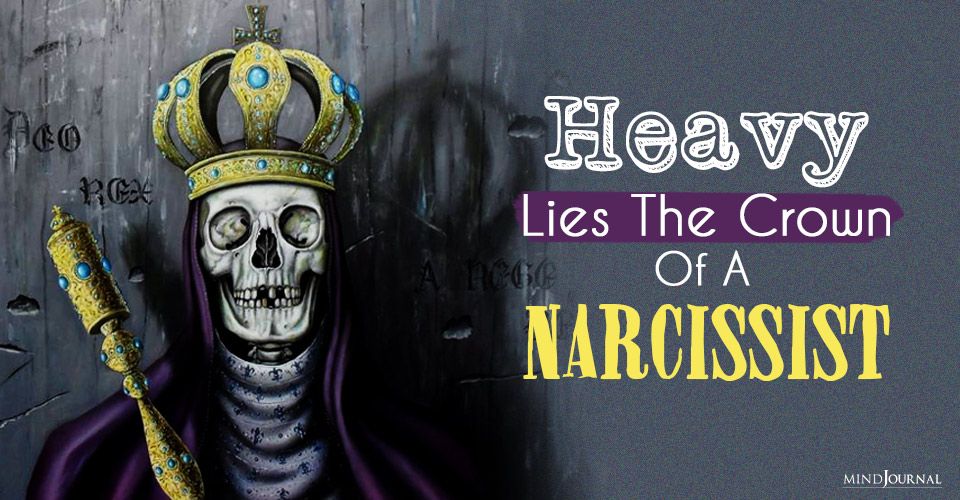 Narcissism always calls for an intense need to control others thus a narcissist will always need scapegoats to dominate. They need a constant supply of attention and admiration from others to feed their false sense of ‘Self’, to have the power to influence the course of events and erect your behavior and also restrict some of them. But why is there an obsessive and compelling urge to control and to be in power? Learn from a narcissist himself.

Heavy lies the crown that sits atop my head as I look out upon my kingdom. Inside my gilded tower, I remain, behind those fearsome double doors that are locked four times and triple-barred. I sit on my throne which has been fashioned from the souls that I have stolen and bound to this edifice of dark steel and jagged glass.

I hear the low moan of their captivity as I sit and regard my lands which stretch away north, east, south, and west. From this vantage point, I see all things and I am seen by all, reminding them of who I am and why I am their better.

I am chosen to lead and rule and they must always exhibit suitable respect and loyalty to me or suffer the same fate of those who knowingly provide my seat. I know there are pretenders out there who would seek, through their perfidious ways to storm my citadel and unseat me.

I know their plans. I know their schemes of treason, their seditious whispers come my way, carried to me by the ever-loyal crows that flit hither and thither spreading my dark message and feeding me the responses which I greedily feed on by way of much-needed sustenance.

I know too well that there are those who would come like a thief in the night and seek with malicious aforethought to slit my throat and leave me bleeding to death, my life leaking from me from their numerous puncture wounds, and thus I must maintain my defenses and seek out these disloyal foes. I know their game and I have them in my eye. They cannot reach me here though.

My dedicated Lieutenants guard the route to this citadel and they will reject all those who approach me with false intentions. I know they will not swerve from protecting their master for I fashioned them in my own image in order to enable them to fulfill their roles. Equipped with blackened weapons that slice and tear they will cut down any who dare to cause me harm.

None are able to land that fatal blow against me though. I am wise to their plans of harm and assassination and I scent their scandalous treachery dripping like ichor from them as easily as I might detect the aroma of the lily or the honeysuckle.

Heavy lies the crown that rests upon my head for I bear the burden of many about me.

It is not easy guiding and corralling those souls that look to me for protection and enlightenment. How they flock to my citadel when I stand at my balcony and allow them the grace of my golden rule.

They bow down before me by their thousands their admiration and gratitude palpable and allowing me to drink deep of their worship. In return, I ensure that these dedicated subjects experience a golden era, an epoch of bounty and elation and so they continue to gather beneath me on bended knees hoping for a glance of their most excellent ruler. It is no role for those of a faint heart.

Read: Disordered Leaders: Why Are Psychopaths And Narcissists Drawn To Positions Of Power?

Those who lack fortitude cannot sit on this throne for only the mighty and the blessed are capable of seizing the hopes of a thousand followers and allowing them their time in the sun. Only he who is venerated and of such elevation can provide such succor to the many who clamor for that guidance in such dark times. My bounty allows them to flourish as they tend to these fertile lands.