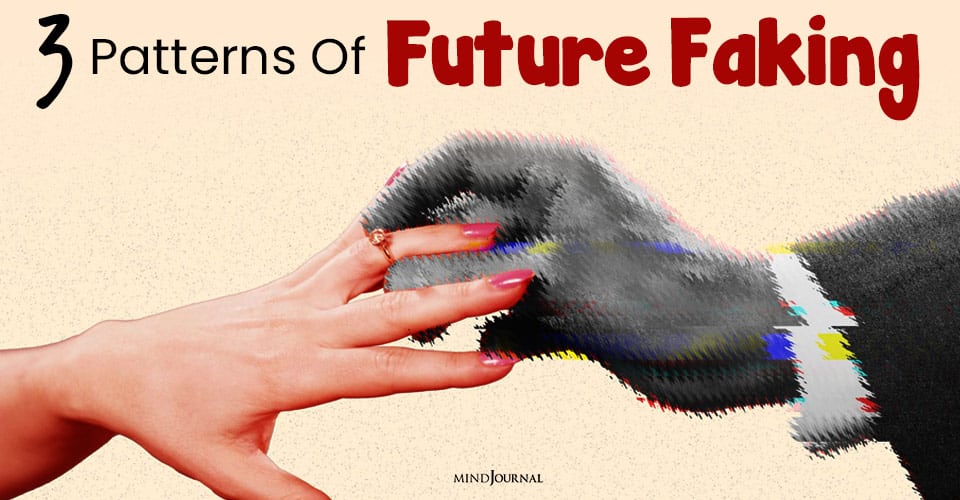 ‘Narcissists future faking technique may be the most powerful weapon they have because they’re essentially using your dreams against you.’ – Common Ego

Once a couple is established, talking about where you’ll live, vacations you’ll take, and children you’ll have helps you feel connected. However, if you start doing this with no intentions of following through, it can be devastating and financially disastrous for your partner. When you keep talking about a future together even when you’re no longer interested in the relationship, you’re engaging in a manipulative practice called future faking.

Whether you’re currently dating a possible “future faker” or trying to protect yourself from being duped, it’s important to identify this destructive pattern. The most common traits are these three below.

Related: What Is Future Faking: How Narcissists Use It To Control Their Victims

1. They have accelerated timing.

If your partner is making big promises about the future and overwhelming you with the details before you’ve been dating six months, that’s a red flag.

2. Do their actions match their words?

If your partner is promising that they’re going to fly on an exotic beach vacation, are the plane reservations made? Do you have a place to stay booked? If you don’t see an itinerary, don’t believe their rhetoric.

3. Do you communicate face-to-face or only via text or social media?

Future fakers are on the rise partly due to easy access to social media. Social media makes it easy to say loving words behind a screen. If they cannot or will not meet you face-to-face, that is a blaring red flag.

Not dating because you’re afraid of future faking is never the answer. Here are four suggestions that can keep you safe from future fakers and other potential dating disasters.

4 Suggestions That Will Protect You From Future Faking

When a new partner tries to talk you into something too soon or without concern for your feelings, that is a red flag. It isn’t exciting, and it isn’t emotionally mature. Don’t let them take advantage of you. Exit their plan.

Instead of wanting someone of a particular height, charm, or style, go deeper and find someone who practices respect and integrity and prioritizes you and your relationship. Future fakers are successful because they find people who are looking at superficial qualities.

Related: What Is Future Faking And Why Do Narcissists Do It?

3. Hold them to their word.

If your partner makes promises, hold them accountable. Ask them to follow through. For example, ask them to show you the plane tickets if you’re going on a trip. Ask to talk on the phone together with whoever you are supposed to be meeting up with. If they make a reservation, talk to the hotel reservations desk clerk yourself.

There are people who believe finding the right one is magical. Healthy love is based on two emotionally mature people equally invested in creating a relationship together. It isn’t magical; it requires that you talk face to face and resolve issues. In the beginning, love can blind us to what is real. Keep your eyes open and be aware of their words and actions to understand their truth.

Future fakers have a self-absorbed personality and can possibly be narcissists. Getting involved with a narcissistic individual leads to constant turmoil and stress. Understand and know the warning signs; if you begin feeling as though your partner is manipulating you, end the relationship early and don’t look back. – Mary Jo Rapini

Mary Jo's mission is to build and encourage healthy, strong relationships, beginning with the most important relationship of all - the one with yourself. Every relationship you will ever have depends upon your ability to understand and get along with yourself. She is a love/relationship expert for the Houston Chronicle, Health News Digest, and Your Tango. She is also a contributor to Cosmopolitan Magazine, Women’s Health First, Seventeen Magazine, Redbook, and Self Magazine as needed. She has a column in Prime Living Magazine which is released every other month. Mary Jo's dynamic style, passion, and enthusiasm is engaging for those dealing with intimacy issues and relationship challenges.View Author posts