Man Up, Like a Woman: A Deeper Look At ‘Masculine’ Energy 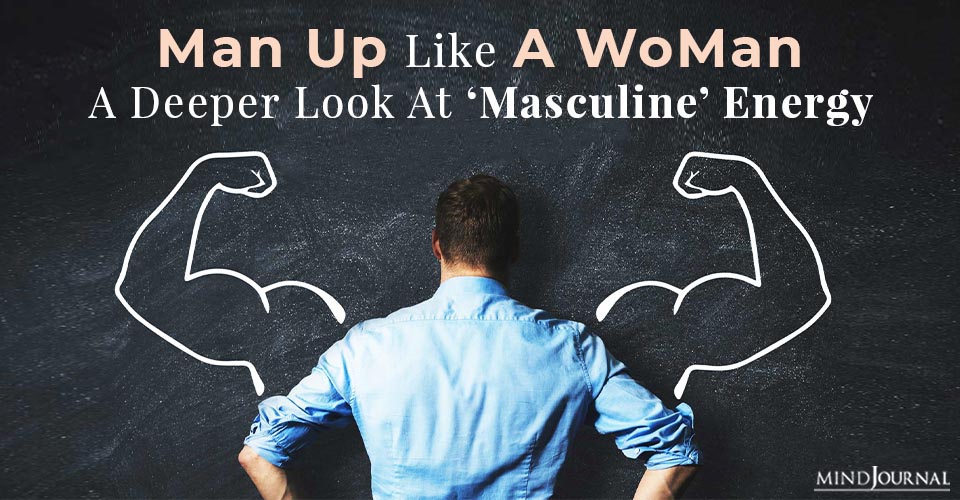 How will you describe masculine energy if the word ‘masculine’ did not exist? The concepts of gender stereotypes are getting outdated with every passing day. So it becomes more important that we take a closer look at what masculine energy truly means.

There is no difference between “you need to harness your sacred masculine energy” and “man up, bro.” None.

Your energy, whatever that is, is neither masculine nor feminine. Sorry. You can yell, scream, fight, cry, sing, dance and build all you want, your energy still will not have hormones, chromosomes, self-identity, or anything else that will give it a gender.

If I hear one more person telling someone else to summon their feminine energy or harness their masculine energy, I’m gonna throw something at them. Like a girl. Your energy does not have a gender, it’s just a series of attributes – adjectives if you will – that make you who you are, in all of your complex and unique humanity.

Your energy has no gender. That idea is a manmade construct, and it doesn’t serve anything.

In my last days of online dating, before meeting the man I would eventually marry, I sat across from a young scientist who was my kind of “hot.” He was geeky, really smart, funny and fit.

We were discussing gender roles, and all was going relatively well, until he said something general about how, even in botany, the female flowers are, by nature, receptive; the nurturing life force.

Even though he somehow seemed not to grok that they were only female because some botanist hundreds of years ago had assigned them that gender, using nomenclature that was manmade and steeped in gender, I could have given it a pass. Until he tried to convince me that there was some larger meaning in the nature of the feminine that arches over plants and animals alike, unfurling tendrils of gendered specificity around humans and their precious sexy bits.

Were it not for my second or third cocktail, I would have turned into a Venus Flytrap.

I mean, someone could have just as easily decided that those with the long, fleshy, goo-squirting parts were called “women” and the ones without them were called “men” and nothing would really have changed. We could have all been Flergubbings, differentiated only by a few specific biological functions, for that matter.

Flergubbings that each play a different role in perpetuating the species, or don’t, but are otherwise pretty much the same in their capabilities. The label is arbitrary. And it is NOT consistent across the plant kingdom, or the animal kingdom, or the people kingdom. (And yes, I know that’s not a thing.)

It certainly isn’t consistent across human cultures throughout time and space. This idea we have of delicate and nurturing female energy is a blip on the scene. (And don’t try to tell any woman that the act of gestating and birthing life is in any way delicate.)

There were the Berdache of Native American cultures, revered for their gender fluidity and bisexual orientation. In Indonesian culture there is the Waria, the Middle East gives us the Xanith, in Africa, you can find the Ashtime, the Mashoga, and the Mangaiko. The Balkans have the “Sworn Virgins,” a group of women who live as men. Throughout time and in nearly every culture and religion there is space to celebrate those who do not conform to a gender binary. Just not here. And not now.

And I’m not even talking about getting all third-gender on things, though I love all of the above illustrations as a way of clarifying that our idea of the binary is an anomaly. I’m just talking about accepting that all people – regardless of sex, sexuality, or gender – are capable of feeling all the feelings. Love. Fear. Generosity. Rage. All of it.