What are Your Divine Feminine and Masculine Creative Energies? 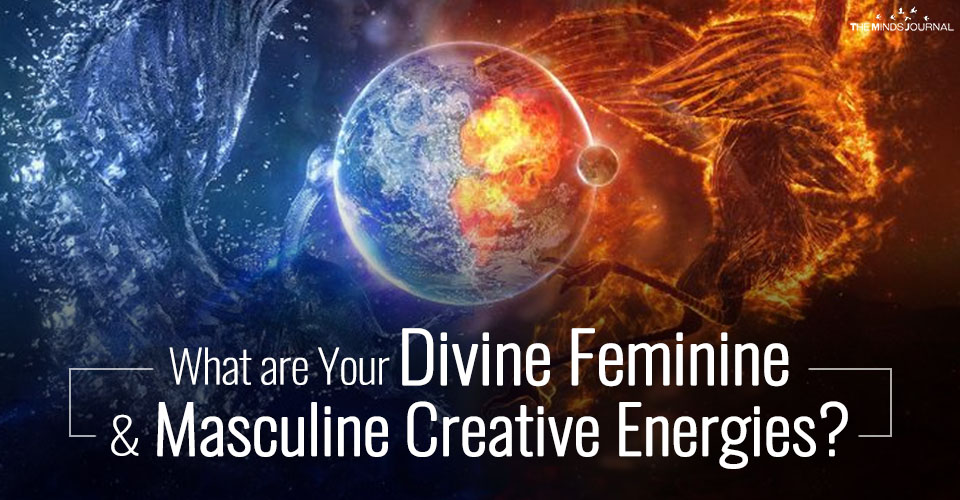 Excerpt from the interactive book, A Course in Mastering Alchemy – Tools to Shift, Transform and Ascend
by Jim Self and Roxane Burnett

The aspects of Divine Feminine and Divine Masculine are misunderstood and out of balance on the planet. Separation, third-dimensional beliefs and conditional programming have split humans according to gender and the divine aspect of each of us has been lost. For eons there has been the duality; male and female, masculine and feminine. Such differences only exist in third-dimensional reality. Separation, in all of it various forms, does not exist in the higher dimensions.

Some ancient and current spiritual practices do identify and speak of the Divine Feminine and Divine Masculine, however not always as a unified consciousness. Each archetype, deity, god or goddess has heavenly characteristics that humans want to embody, and humans believe that by understanding them, praying to them, merging with them or “channeling” them, they too will become divine. On this pathway to the Living Light Body, that the Teachers of Light* have laid before us, gender plays no part. Divine Feminine and Divine Masculine have no relation to the body or the rational mind.

This pathway is about our own internal, unified nature and our expression of creative energy. Regardless of our gender, we all have access to the masculine and feminine creative energies within ourselves. Most of us, however, are unconscious of the great treasure we have access to, and hence do not know how to recognize and use these energies for our own success and personal evolution.

Feminine creative energy is both simple and complex. It’s multi-focused, energized and fast. Masculine creative energy is uncomplicated, single-focused and slower than the feminine. When the Teachers talk about “feminine” or “masculine”, they are referring to a set of characteristics and energetics within the creation process, not female or male qualities. Feminine energetics are demonstrated as ease, patience, flow, smoothness, and understanding. Masculine creative energy holds energetics such as stability, structure, focus, and command. This is not to say that the masculine can’t flow in ease, or that the feminine can’t be stable and commanding, for example. Stability as feminine energy demonstrates itself differently than stability as masculine energy. Flow as masculine energy demonstrates itself differently than the feminine flow. Take a moment and observe this for yourself.

To illustrate this in a visual way, masculine creative energy creates through the structure, such as straight lines and angles. Feminine energy is made up of flowing curves and swirls. There are no straight lines and angles in feminine creative energy and there are no curves and swirls in masculine creative energy. Both types of energy are required for you to bring forth balanced creations. Masculine energy without feminine energy is not whole. It does not feel valued. It’s not nurtured or appreciated. It’s incomplete. I’m not talking about men and women or relationships, although this applies to those too. I’m talking about your personal, internal, masculine and feminine balance. Feminine energy without the masculine is incomplete – it feels unsupported and without focus; it’s scattered, ungrounded and unstable; it’s without structure; and as a result, it has no sense of direction, completion or success.

Within the creation process, the feminine energy is the first spark or impulse. It’s the first creative thought, idea or desire. Masculine energy then takes that impulse and creates a structure for its manifestation: the scaffolding upon which to construct it. This co-creating occurs within each of us, in our individual expressions as well as our external relationships. For example, the feminine creative energy within you has the idea and impulse to the garden. The masculine energy within you builds the raised garden beds. The feminine then plants and nurtures the vegetables and herbs. The result: you benefit by having fresh, delicious organic food. This is a unified creation process of flow and structure. Without both components, you would have no success and no food.

Humans, whether we realize it or not, use both feminine and masculine creative energy with every thought we think and every action we take. More often than not, however, we do it through reactionary thoughts and unconscious actions. Balanced creations use a balanced, organic flow of both types of energy. Those who create dominantly in one energetic or the other end up with results that are off-balance, incomplete, do not have longevity and are generally not successful.

It’s of the utmost importance during this time of planetary Shift to identify, experience and begin to anchor healthy masculine and feminine energy into your third-dimensional creative process. Increasing your awareness of how you create using these two powerful energies will allow you to use them in balance, intentionally and successfully. This awareness and practice will also allow the anchoring of the higher-dimensional, divine equivalents to more easily move into your experiences.

This unification and rebalancing requires the original essences of the feminine and masculine to be reestablished within you, and therefore also upon the planet and within all of humanity. This original essence or template is what you lived and demonstrated but forgot at the Fall of Consciousness. This is the divine aspect of who you are. This is known as the Divine Feminine and Divine Masculine. You hold both within your fifth-dimensional experience. It is the divinity you share with All That Is.

The wise, knowing Divine Feminine nurtures and offers the life-giving safety of the crucible (symbolically and in reality). It’s that aspect of divinity that has to be reestablished first. This original Divine Feminine aspect of Creator will open the space within the fifth dimension for the Divine Masculine to enter and be present in its full glory, as it was originally created. At that point, the Divine Masculine will take its proper place in perfect unison with that feminine aspect. It’s the Divine Feminine who does this because the Divine Masculine is not strongly present at this time in the third dimension. The masculine is still operating from that place of dominance, inequality, and control. For that masculine structure to be dismantled and transformed into the divine, it takes the feminine to set the energetic balance, make it available for the divine image of the masculine to enter and take its proper positioning not only in the creative process in the physical realm, but also within the physical body and all of humanity and Earth.

Read HuMAN Up: A Deeper Look At ‘Masculine’ Energy

This course is designed and taught with the assistance and guidance of the Archangels, Ascended Masters and Teachers of Light. Their intention is to expand your understanding, your consciousness and your ability to utilize the new energy tools on the path toward building your Light Body. Alchemy is much more than the concept of changing lead into gold. Alchemy a pathway allowing you to step from your third dimensional experience into a higher, more expansive awareness of life.View Author posts