Are Men Only NEEDED Or Are They Also WANTED? 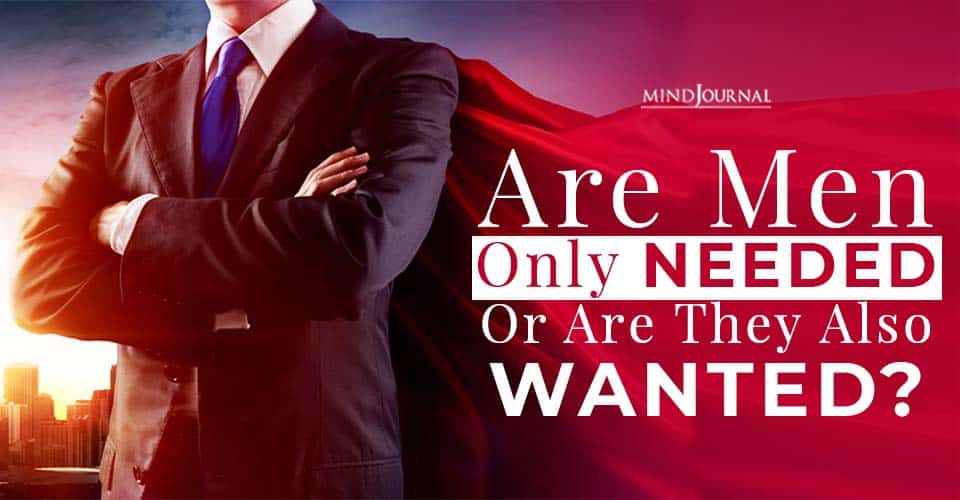 Men also like to be wanted, just like they are needed. They have feelings and sentiments too, and they also crave tenderness and care just like women do.

Running an online magazine about masculinity, I’ve come to observe a curious phenomenon. When we post about male rape victims or the enforcement of masculine gender roles, we get plenty of interesting comments.

But when we post about Nice Guy Syndrome and other issues around men who feel sexually unwanted, our comments blow up like they were directed by Michael Bay. This is an issue that touches men deeply and damagingly, and ties in with a lot of pain that, hegemonic masculinity being what it is, usually doesn’t get talked about.

Others, such as Hugo Schwyzer, have written about how straight men don’t feel sexually desired, but that’s the tip of the iceberg. It’s hard to overestimate just how deep this idea goes. It feeds into a phenomenon a lot of guys have experienced, a phenomenon based on weird broken ideas about gender roles, ideas so deeply rooted in the subconscious that most men aren’t even aware that they’ve got them.

The core issue is this: many, many men in our society feel they have to be needed, because they can’t imagine they could ever be wanted.

Being needed can take different forms, all of which resemble traditional male roles.

We get any more macho stereotypes in here, it’s gonna look like a Village People reunion. This is what being masculine means in our culture: to be necessary.

Related: The Only Quality That Matters In A Man

One of the most common complaints about feminism, all the way back to the First Wave, is that feminism seeks to make men obsolete or unnecessary. “If women can [fill in anything about female agency] what will they need men for?” runs the line, in every decade, in response to every advance. And while nobody is arguing that that’s a legitimate criticism, it’s important to understand that it arises out of real fear. Look at the keyword in that sentence, need. It’s always the same concept, however, that objection is phrased.

Plan A, for men in our society, is to be necessary, to be needed, to be indispensable. There is no plan B.

If plan A doesn’t come off, we are lost, we’re adrift, we have nothing. This is an existential fear, on a very deep level.

There’s a common observation among those who, like myself, have worked in senior citizen care homes. It’s related to why the population of those homes skews heavily female, to why men die younger than women. Over and over, again and again, those who are around senior citizens have to deal with retired men who, no longer working and no longer earning money, don’t know why they’re still alive.

They don’t know who they are or why they bother to continue drawing breath if they’re no longer needed for something important. Some of them find something else to define themselves, some new project or internal source of worth. Others just give up and let the next swell of ill health carry them overboard.

The “crisis of masculinity” that many people are currently wringing their hands over, the “mancession” involving men’s employment dropping slightly faster than women’s, the cultural yearning for an imagined past when men bestrode the world like gray-suited colossi, building and making and innovating important things, the same problem.

We’re at a place, culturally and economically, where many of the traditional sources of necessity for men have evaporated, or at least been drastically downsized.

We don’t need to have 25% of the population growing food any more; we can do it with 2%.

Women don’t need men to provide for them any more, education and career opportunities have opened up. All this would be fine, if there were any plan B.

It’s a well-worn observation that media is the first place to look for enforcement of societal norms. A quick glance at our culture’s media demonstrates that it endlessly reinforces the notion of male necessity. On a surface level, there’s the fact that with fictional heroes remaining overwhelmingly white males, if a guy doesn’t show up, there’s no story at all. That’s a nice form of necessity. Deeper than that, though, there’s the structure of every “romantic” subplot in every movie that has a character who can be accurately described as The Girl.