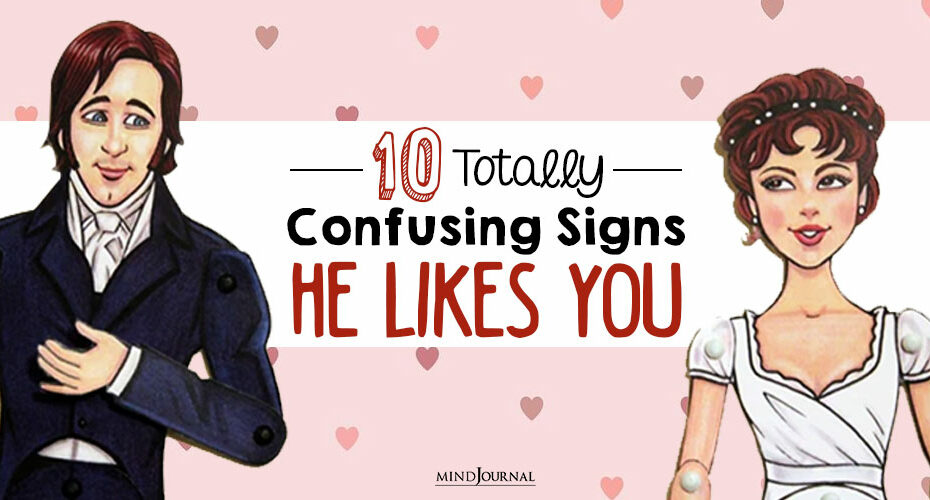 Men can give off mixed signals when they like a woman, and many times, you might not even know that they have a huge crush on you. Their body language and facial expressions can sometimes confuse you to the point you might think that they hate you. Not every man is expressive, and that’s why he tends to have a hard time talking to you about his feelings and can end up displaying a few confusing signs he likes you.

If you want to know whether he likes you or not, look at the way he behaves when he is around you. Is he hanging on to every word you’re saying? Is he laughing out loud even when you haven’t said anything particularly funny? Does he get nervous whenever he is around you? Does he try to sit beside you every chance he gets whenever both of you are out with your friends?

Look out for these confusing signs that point towards the fact that he has a massive crush on you, and maybe wants to be in a serious relationship with you.

Related: 8 Psychology-Backed Signs Someone Secretly Has A Crush On You

1. He gets irritated whenever you talk about other men.

Whenever you talk about other men or show any kind of interest in them, if you notice him getting angry and annoyed, then it’s a sign that he’s feeling jealous. If you see his face tighten up whenever you talk about having a crush on another guy, know that it’s heartbreaking for him to imagine you with someone else.

He might pretend not to care, but his feelings will be clear as day on his face and his body language will always give away his true feelings. If a guy is not interested in you romantically, then it will obviously not bother him in the slightest who you are talking about or hanging with. Getting angry and showing jealousy is a major sign that he likes you and wants to be with you.

2. Whenever you’re around, his friends tease him about you.

If this happens, then it’s guaranteed that he likes you! Men normally pull each other’s legs the most whenever one of them has a crush on a woman, so if you find his friends teasing him about you whenever you’re around him, know that he is crushing on you hard. On top of that, if their jokes get to him and he acts awkwardly, then it further cements the fact.

Even though he feels awkward and uncomfortable when his friends tease him about you, he never attempts to stop them, because deep down inside, he loves that he is being linked with you.

3. He hangs on to every word of yours and cares about what you have to say.

When you speak, he listens to every word of yours very attentively, instead of just pretending to listen. He is always intrigued to know you more and on a deeper level; who you are on the inside, how you think and perceive the world is important to him. Unlike some other men who could care less about what you have to say, he is always there unfailingly whenever you’ve something to say.

And no matter what you talk about, he remembers even the smallest detail to the T. Is your standard order a Salted Caramel Frappuccino at Starbucks? He knows. Is your favorite book ‘The Seven Husbands Of Evelyn Hugo’? Be rest assured, he knows it very well. He likes you a lot, and this is evidence enough of his feelings for you.

Related: How To Know If A Guy Is Really Interested In You (or Just Flirting For Fun) Based On His Zodiac Sign