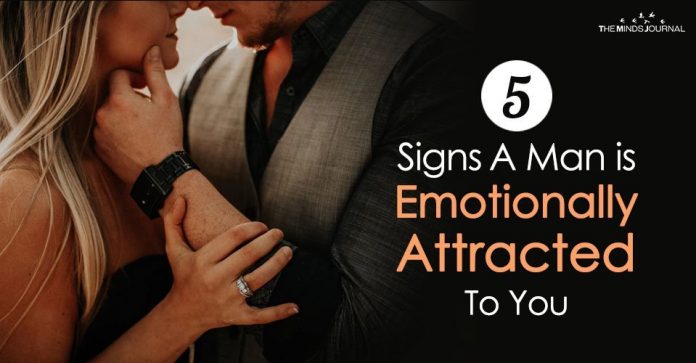 5 Signs A Man is Emotionally Attracted To You

For a long term relationship, emotional attraction is highly desired. Here are few signs, indicating a man loves you emotionally.

As you’ve probably experienced, the way you look or the way a man is physically attracted to you might be what first gets his attention.

But, physical attraction is not what ultimately inspires a man’s love, devotion, and lifelong commitment.

In order for a man to truly fall in love and want to be with you forever, he has to feel an emotional connection and a deep heart-to-heart bond with you.

It’s really important that he is emotionally attracted to you.

These signs a man is emotionally attracted to you are so important to become aware of and look out for when you’re dating or maybe in a new relationship or even if you’ve been with a man for a long time.

1. He notices the little things about you.

The first sign a man is emotionally attracted to you is that he notices little things about you that other people might miss.

These things might have something to do with your personality, character or the way you feel or behave in certain situations.

When a man is noticing these little things about you that may be an acquaintance or a coworker, someone you just know on a surface level might not notice, it’s a sign that he’s really listening to you and paying attention to you, learning from you and it’s a great sign that he’s becoming emotionally attracted to you.

This could be anything.

Has a man ever noticed something about you for example, that you tend to get nervous when you’re in this situation like meeting new people or if you have to give a presentation at work, it could be anything.

These little things that he notices about you are likely kind of endearing him to you.

It’s really important and it’s kind of subtle but important thing to become aware of.

2. He loves and accepts you for who you are.

The second sign a man is emotionally attracted to you is that he loves and accepts you for who you are.

When a man starts to really fall in love or become emotionally attracted to you, he’s going to want to see you even when you’re feeling vulnerable and not at your best.

For example, when you first wake up in the morning or if you’re sick and not feeling well or if you had a bad day.

A man is going to want to be by your side and he’s actually going to love you and accept you for these vulnerable parts that you might not want to show to others.

Men fall in love with you for what you perceive to be your flaws, not in spite of them.

Maybe even more attracted and connected in those moments—

It’s a big sign that he’s developing an emotional attraction to you that just goes beyond superficial physical attraction.

3. He opens up and confides in you.

The third sign he’s emotionally attracted to you is when he opens up and starts to confide in you.

Men are kind of notorious for not easily being able to open up to others, especially to women they are in a relationship with.

A lot of men have been taught from an early age that it’s not safe to open up or it’s not masculine to express your feelings.

If a man starts to see you as someone who he can open up to and confide in, it’s a big sign he’s starting to develop some emotional attraction to you.