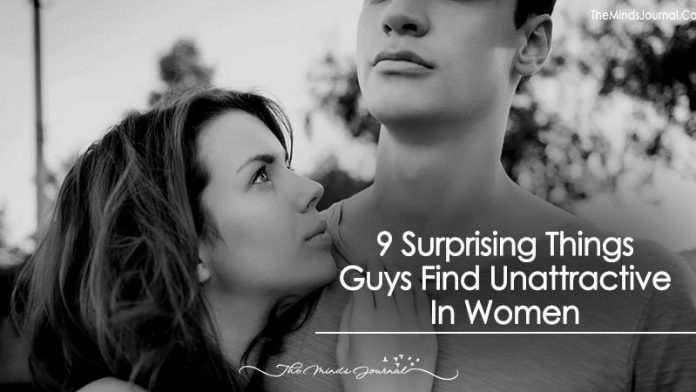 It’s indeed very difficult to understand what men actually want from their women. They might crush on the cheerleader of their college but secretly wish to date the geek topper. They will keep on ogling at a girl who is extremely pretty and well-dressed and at the same time, they will admire the female soccer player whose goal made their college win the tournament.

We often tend to do so many things to impress our opposite sex. But are they really effective? Mostly, they aren’t. While men can crush on a lot of women, when it comes to their partners, they have certain reservations. Most women fail to understand that and eventually, they get lost in the crowd. What might seem to us very natural and attractive are actually negative points.

So, we have created a list for you, so that you can know the 9 secret things men find unattractive in women.

Yes, guys do crush on celebrities wearing tons of makeup but when it comes to choosing their partner, they would never ever do that. Men love women who are naturally beautiful. Using loads of eyeliner, eyeshadow, mascara, lipstick, foundation, etc conceals your natural beauty. Your natural beauty comes from the way you smile or the wave you blink your eyes. That’s what men want in their women. The artificial beauty of the makeup is extremely unattractive. Men wish to see their women in their true form, with their pimples and dimples. So flush off those makeup kits and be natural.

(2) Being the damsel in distress:

Let’s be honest here. Childhood fairy-tales have been a lie. No man likes to be with a damsel in distress. Men love women who can complement them and vice versa. The truth is, they have better things to do in their lives rather than going around as princes in shining armours and saving damsels in distresses.

Are you planning to cut your hair because the guy you like appreciated a short-haired girl the other day? Don’t. He might appreciate someone else and it’s not necessary that he loves short-hair. On the contrary, men don’t like women who go extreme make-over like completely changing the colour of their hair or having a cosmetic surgery. A man would never want his woman to change artificially for him. He fell in love with you for the woman you are. It would be a big turn-off for him if you change your physical appearance.

Men hate drama-queens. If you plan to get their attention by becoming the drama-queen, you will definitely get it, but in negative ways. Men prefer simple women and hate complications. They would never want their women to create scenes everywhere.

We all love the Page3 gossip but not all the time. You might share a scandal or a rumour which happened in your circle but a man hates listening to gossip all the time. When he gets time to be with you, he wants to spend a quality time with you; don’t ruin that by gossiping. Gossiping means you are demeaning people around you and you can’t get importance by devaluing others. This will have a negative impact on the man.

(6) Bitching about your ex:

Your ex might have been a douche bag. But there has been a point of time when you loved him when he meant everything to you. You have cried for him too. So, why bitch about him, now? You are not giving your current partner importance by bitching about your ex. On the contrary, your man might feel that if you two break-up, you will bitch about him, too. This will rather ward him off. Bitching about the person you once loved means you don’t cherish the good moments you spent with him and you don’t respect him at all. Men want to be respected and when they see their women lack respect for anyone, they hate it.