11 Of The Most Common Nightmares And Their Scientific Interpretation 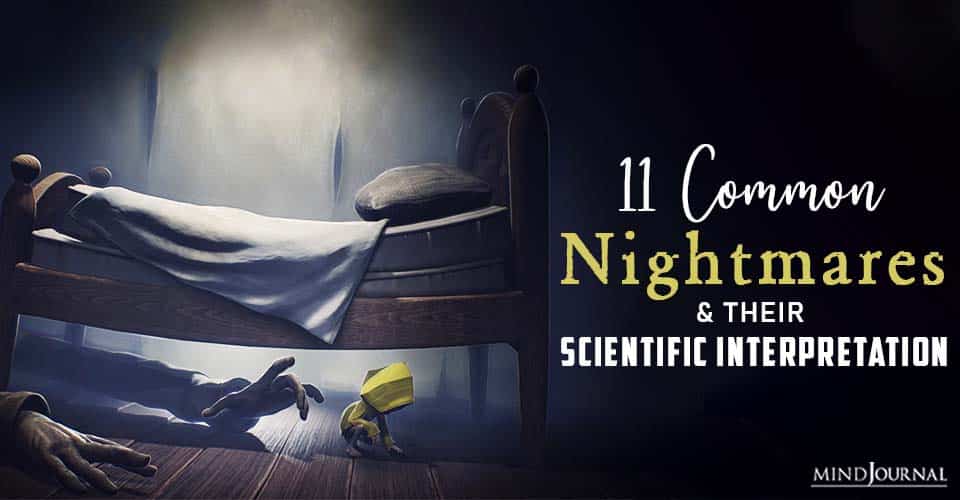 Everyone has nightmares at some point in their lives. But apart from having a dream translation, some of the most common nightmares also have some science behind them. Yes, the nightmare you had can have a solid, scientific explanation behind it.

Recently, the folks over at Sleepopolis reached out to me because they discovered my previous article about anxiety-induced nightmares, and they created a very interesting infographic about some of the most common nightmares and their meanings. They included both the scientific interpretations and the dream translations that are mostly rooted in the psychoanalytic traditions of Sigmund Freud.

Dream Translation: Dreaming about spiders usually means someone in your life (typically a parent or mother figure) has been quite overbearing, and “weaving webs” into your life. You may feel like an outsider in a certain situation, or maybe you’re trying to keep your distance and stay away from something tempting.

Scientific Interpretation: Spiders are one of the most common types of hypnagogic hallucination, which is a vivid, dream-like sensation that an individual hears, sees, feels, or even smells that occurs near the onset of sleep. 10% of the population experiences a sleep-related hallucination at some point.

Want to know more about spiders and their significance? Then check out this interesting piece here The Spiritual Meaning of Seeing A Spider Often, And Seeing Spiders Meaning

Dream Translation: Oceans represent emotions, so when you dream of drowning in the ocean, it typically means you’re completely overwhelmed by the emotions you’re holding in. You’re feeling overworked, you have way too much on your plate right now, and you’re struggling to keep up with everything.

Scientific Interpretation: To dream you’re drowning could actually mean you’re having difficulty breathing while you sleep, potentially have sleep apnea, or are experiencing a hypnic jerk, or an involuntary muscle spasm that occurs as a person is drifting off to sleep.

Related: 7 Common Dreams and Their Meanings

Dream Translation: To dream you’re falling means you’ve been feeling a sense of failure, or that a current situation in your life may seem to be getting worse. You also feel like you might not have much control over things or you’re stuck in a downward spiral trying to climb back up.

Dream Translation: You’re having difficulty in communicating how you feel or expressing yourself. Your teeth falling out in a dream is usually a sign of insecurities or concern with self-image. It could also mean that you are making a huge compromise or you’re not willing to make an important decision in your life. You feel like you have a lack of control over a situation.

Scientific Interpretation: While the Freudian dream interpretations signify a lot of punishment for “self-love” centered around this dream, scientifically, to dream about your teeth falling out has a direct correlation with anxiety.

Dream Translation: To dream you’re being chased means you may have been feeling helpless in a certain situation, or you’re avoiding (running away) a real-life problem or issue that you don’t want to face. You may be avoiding something painful or fearful. If you continue to dream you’re being chased, it’s probably a sign that it’s time to face the problem or issue you’re avoiding.

Scientific Interpretation: Your fight-or-flight response has been activated. In a study of 1,000 German adults, 26% experienced being chased in a dream.

Dream Translation: You have way too much on your plate right now and you’re completely overwhelmed. You may be feeling as though you missed out on an important opportunity in your life. You feel unprepared, and you’re most likely going through big changes in your life to which you’re having a difficult time adjusting.

Scientific Interpretation: In the same study mentioned above, 24% of German adults experienced being late in a dream.

Related: 10 Nightmares And What They Are Trying To Tell You