Decoding The Freudian Symbolism in Your Dreams 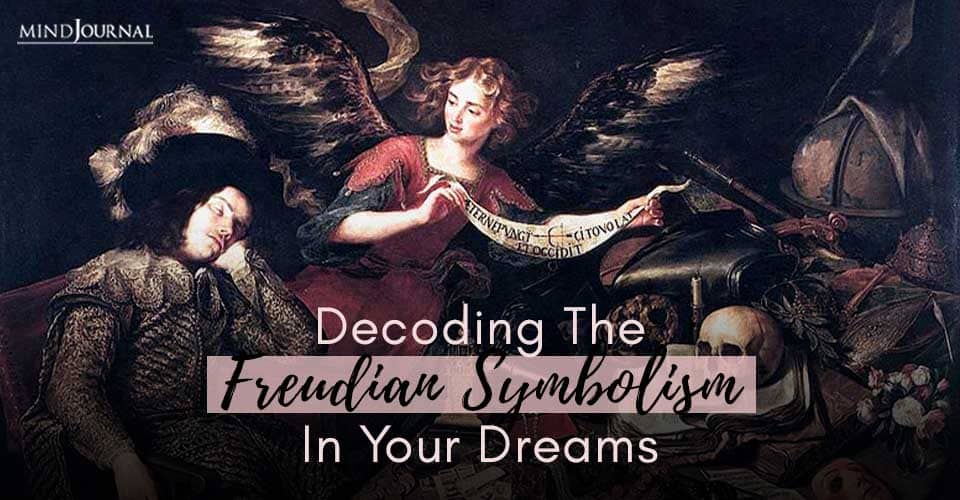 Dreams have always been intriguing to people, and when you add some interesting Freudian symbolism to them, it’s something else entirely.

Everyone is interested in dreaming—in my introductory psychology course, it is always one of my students’ favorite topics.

But do dreams really mean anything?

Psychologists are genuinely divided over the function and meaning of dreaming. Some psychologists think that dreams are nothing more than the result of random brain activity that occurs while we are sleeping, while others accept the perspective of people such as Sigmund Freud and Carl Jung that dreams can reveal a person’s deepest unconscious wishes and desires.

In a nutshell, psychoanalysts such as Freud and Jung believe that we disguise disturbing impulses by substituting more acceptable symbolic objects to stand in for the latent content of our dreams.

Freud wrote about dreams in many different places, most notably in his book The Interpretation of Dreams. According to Freud, the number of things represented by symbols in dreams is not great: The human body, parents, children, siblings, birth, death, nakedness, and a few others.

1. Genders represented as parts of houses.

The person as a whole is often represented in the form of a house—houses with smooth walls are men, and those with projections and balconies to which one might cling are women.

Parents appear in dreams as kings, queens, or other highly respected persons; children and siblings are symbolized as small animals or vermin.

3. Birth represented in the form of water.

Birth is almost always represented by some reference to water: Either one plunges into water or climbs out of it, rescues someone from the water, or gets rescued from water (indicating a mother-like relationship to that person).

4. Death represented by journey, and nakedness by clothes.

Death is replaced in dreams by taking a journey; nakedness is symbolized by clothing, especially uniforms.

Related: 20 Interesting Facts About Dreams That You Didn’t Know About

The richest collection of symbols, however, is reserved for the sphere of sexual life. According to Freud, the great majority of symbols in dreams are sex symbols.

The number three is a symbolic substitute for the entire male genital, whereas the penis alone is represented by long and upright objects such as sticks, umbrellas, poles, trees, or the Washington Monument. It can also be symbolized by objects that can penetrate the body and cause injury—think of knives, daggers, lances, swords, and firearms (especially revolvers). Also substituted for male genitalia are objects out of which water flows, such as faucets and fountains, or objects that can be elongated such as telescopes and collapsible pencils.

In the words of the old song by the folk singer Melanie, anything that is longer than it is wide can be a phallic symbol.

The extraordinary characteristic of an erection (in which the penis raises itself against the force of gravity) results in symbolic representation by balloons, airplanes, missiles, and rockets. In some cases, the entire person becomes a representation of the sex organ if the person pictures himself flying. Other less obvious male symbols include reptiles, especially snakes, and fish, hats, and coats.

6. Female genitalia represented by enclosed spaces that can be filled.

The female genitals are symbolically represented by objects which enclose a space capable of being filled by something—for example, pits, caves, bottles, boxes, trunks, jars, suitcases, pockets, ships, the mouth, churches, and shoes.

7. Breasts represented by round fruits.

Wooden and paper objects are symbols of women, whereas breasts are represented by apples, peaches, and fruits in general.

8. A few more representations of dream symbols when it comes to sexual life.

Related: 25 Common Dreams and Their Meanings

As much fun as all of this, always keep in mind that a Freudian analysis of dreams is not simple; it takes many years of training to understand the factors that need to be taken into account to conduct a proper interpretation of dreams.

And after all, as Freud himself once supposedly said, “Sometimes a cigar is just a cigar.”

Freudian symbolism in dreams has always served as an important way of decoding even the most confusing dreams, that you might end up having. There are certain dreams that can confound you at times, but Freudian symbolism might help you understand it better. However, don’t try to look for deep meanings in every dream you have; sometimes they are just simple, weird dreams.

Frank McAndrew is the Cornelia H. Dudley Professor of Psychology at Knox College and an elected Fellow of several professional organizations, including the Association for Psychological Science (APS). He is also a blogger for Psychology Today Magazine. McAndrew is an evolutionary social psychologist whose research is guided by the simple desire to make sense of everyday life, and he is currently studying gossip, aggression, and creepiness. His research has appeared in dozens of professional journals and it is regularly featured in popular media outlets such as The New Yorker, NPR, the BBC, The New York Times, The Atlantic, and NBC's Today Show. He has written for many popular prints and online magazines, including Time, CNN, The Washington Post, The Chicago Tribune, Salon, Newsweek, The Daily Beast, PBS Newshour, The Huffington Post, The Guardian, The New Republic, and Scientific American. Consistent with his long tenure at a liberal arts college, Professor McAndrew is also an award-winning teacher who is particularly proud of the fact that more than 100 of his former students have gone on to complete a doctoral degree in psychology or a closely related field.View Author posts