Can Two Narcissists Be Together? Shocking Facts Backed By Science 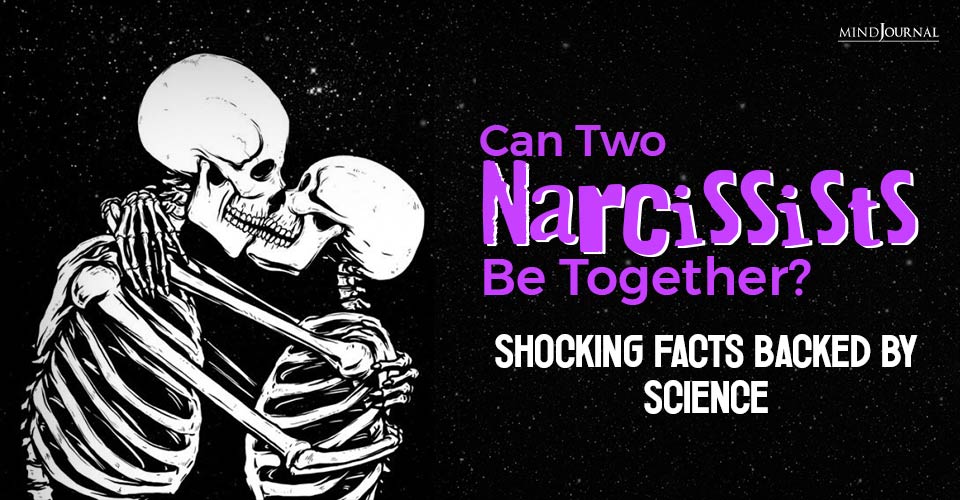 When you finally parted ways with your narcissist partner, did you murmur under your breath that hopefully someday they get the taste of their own medicine? Chances are your heartfelt intention might come true after all.

Read: Signs You Are Dealing With A Malignant Narcissist And How To Cope

Can Two Narcissists Be Together?

So what happens when two dysfunctional, insecure, selfish, and demanding personalities get together? Are they kindred connections? Do they have a smooth ride now that they have found someone who thinks like them and can understand them? Can two narcissists be together?

While we don’t know for sure whether two narcissists can forge a positive and healthy life together, research does support that a narcissist will gravitate towards another for a long-term committed relationship. How does this happen? To understand this better let’s delve into the personality traits of a narcissist first.

A narcissistic personality, whether overt or covert, crave perfectionism, attention, admiration, and other narcissistic supplies from their significant others. They have a fluffed-up self-image and as per them, they are superior to others, ergo worthy of all the praises and adulation. So, how do 2 narcissists interact with each other?

Now, what happens when you put two narcissists together? Ideally, the result should be catastrophic! Both narcissist partners want the same thing, unquestioned devotion, and neither of them can provide it to the other.

A typical narcissistic person is hypocritical, meaning they might cheat, lie, and ignore their partner, but the partner must never behave this way. It would make more sense to think a narcissist would choose a submissive and empathic partner who will cater to their needs and put up with their dysfunctionalities. And this does happen a lot too.

But the above-mentioned study suggests, assortative mating changes the game altogether. According to this theory of attraction, like attracts like. When it comes to compatibility, people find common and similar traits to be more of an important deciding factor, than the complimenting ones. And this rule sits well with people belonging to the Dark Triad Personalities, including narcissists.

Believe it or not, people with undesirable personality features also seek out characteristics similar to their own, when selecting a romantic partner.

How Can Two Narcissists Be In A Relationship?

If you still can’t wrap your head around the fact that two narcissists together can choose to stay in a relationship, the following reasons might bring you some clarity regarding how can two narcissists be together.