Birthmark Meanings: What Does Your Birthmark Say About You? 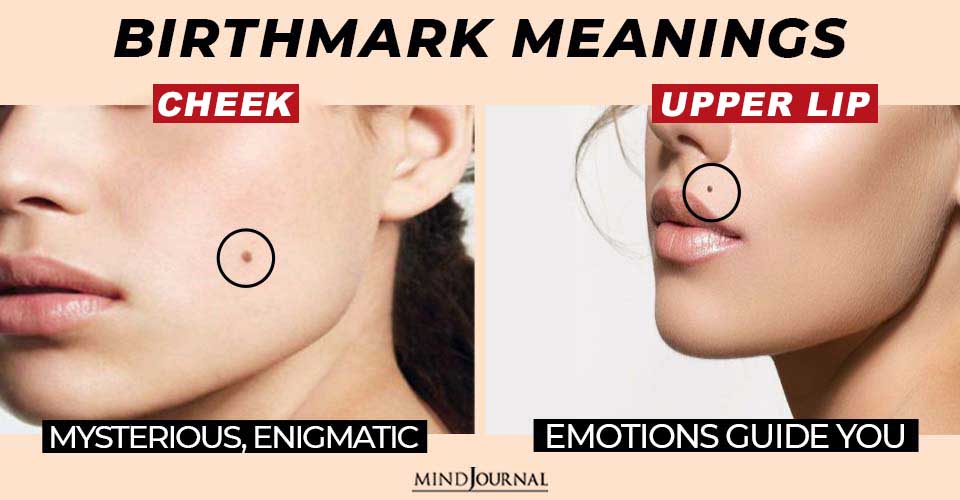 Scientifically speaking, a birthmark is a congenital, benign irregularity on the skin which is present at birth or appears shortly after birth, usually in the first month. They can occur anywhere on the skin. (1) Birthmarks are caused by an overgrowth of blood vessels, melanocytes, smooth muscle, fat, fibroblasts, or keratinocytes.

Birthmarks, in certain cultures, have specific meanings and associations to superstitions, teachings, and experiences of particular communities. These teachings range from myths, superstitions, rituals, traditions, and even religions.

There are many different assumptions made about the appearance of birthmarks in people. Each cultural background has different interpretations of birthmarks. People from some communities believe that birthmarks are scars of wounds inflicted in our past lives.

Other people believe it as either lucky or as omens.

A few others believe birthmarks are just the result of what the mother had during her pregnancy.

Let me help clear the curiosity around birthmarks by talking about its types and how they are formed.

Types of birthmarks and how they are formed:

There are many different types of birthmarks but dermatologists classify birthmarks into two broad categories.

They are as follows:

These types of birthmarks are formed by an excess amount of skin pigment cells.

Much of the actual cause of birthmarks are not known but some of the interpretations of birthmark’s meanings are based on their location – where they are found on the person’s body. Most of these meanings carry a superstitious, mythological, or spiritual connotation.

The meanings ascribed to the birthmark are mostly based on their location, shape, colour, size, appearance, and form.

Related: 18 Weird Superstitions You Practice Without Even Realizing It

Meaning of birthmarks based on their locations:

Note that the location might be the same but their meanings will change based on the gender of the person who possesses it. The attributed meanings to each birthmark are gender-specific and are different in different genders. Let us find out the meaning of each birthmark based on where they are placed on the body.

Birthmark location meanings on the face of a woman can say a lot about her personality, potentials and talents.

1. Birthmark above the bridge of the nose.

If a woman has a birthmark above the bridge of the nose, it means that the woman has acquired wisdom throughout her life and is wise beyond her age. She has the power of intuition which she uses correctly to gain knowledge about the world. Such women can gradually acquire the power of clairvoyance.

2. Birthmark on the forehead.

A woman who possesses birthmark on the forehead can predict the future and has excellent foresight.

3. Birthmark on the right corner of the eye.

A woman with a birthmark on the right corner of the eye is scandalous, jealous, controlling and suspicious.

4. Birthmark in the left corner of the eye.

Women with a birthmark in the left corner of the eye are self-critical. These women always put themselves down. They often enter into conflict with others because of their own internal chaos and conflicts.

5. Birthmark on the right eyelid.

Women who have a birthmark on their right eyelids have to go through a lot of stressful situations in life. They are easily triggered to be stressed. These women, at the same time, are smart, outgoing, and talented.

Jenny is a writer, traveller and freelancing photographer who is intrigued by the supernatural. She loves to explore and write about supernatural, astrological, spiritual and para-psychological topics.View Author posts