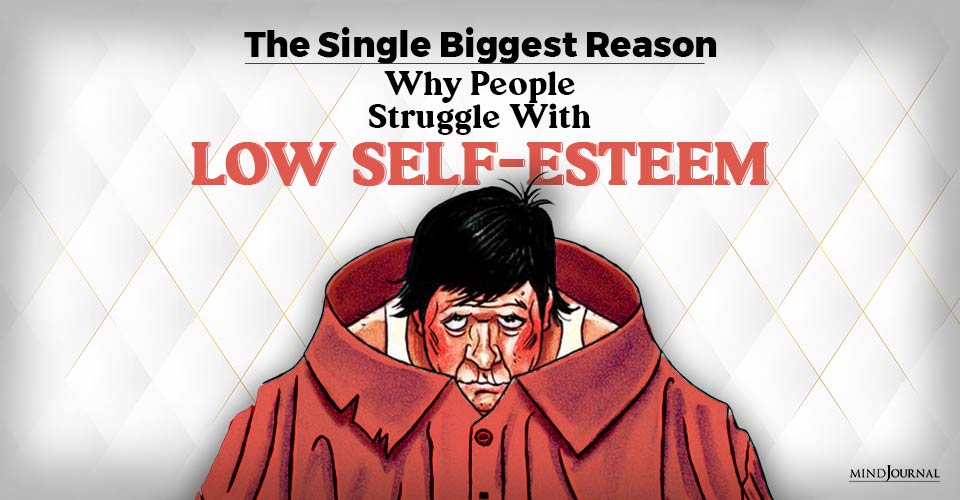 If the single biggest reason is your reason, then dealing with it will help you end your struggle.

I don’t claim this list of reasons is exhaustive. It’s a collection of what I found in my search from the varying lists for why people struggle with low self-esteem.

Thirty reasons are kind of a lot don’t you think? Can you identify with any of them? What if I told you that only the last three on that list are exempt from the single biggest reason?

Related: What is Self-Esteem ?

Every single one of the reasons numbered 1-27 either directly, or indirectly, share the same root. Some are obvious while others are hidden. The big umbrella that covers them all is called trauma.

Take a look at the list again with trauma in mind and see where you recognize, or fail to recognize the connection.

Do you dismiss any of them? Maybe the one you relate to? The ones that say trauma or abuse is easy to validate while the others are often dismissed or diminished.

Related: What is Self-Esteem And How To Raise It?

Let’s take a deeper look at the “others” and find how trauma can be at the root of low self-esteem. More often than not, this root of trauma occurred during childhood.

There can be a varying degree of “disapproval” as well as the frequency of it. A single disapproving look or word may or may not cause trauma. But a child that is repetitively disapproved of takes it personally.

They internalize that they’re not good enough. More severe disapproval may come through demeaning words, name-calling, and such, which ends in the same result of removing the child’s perception of value. Removal of a sense of inherent value is traumatic to the core.

A caregiver can be a parent, teacher, doctor, nurse, etc. who by definition are supposed to be giving care or attention to the child. When this care is missing it is emotional neglect causing the child to feel invisible and without value. Resulting in low self-esteem See the trauma?

3. Constant strife/fighting by parents or caregivers.

When a child is surrounded by strife by those who are entrusted with their care it removes their sense of safety. When a child loses a sense of safety they feel endangered and it triggers the fight/flight/freeze response. Living in a constant state of being triggered affects the nervous system by sending it into a persistent state of reactivity. This kind of trauma causes genetic changes to occur in the brain.

The degree of trauma this inflicts is subject to how secure a child is when it occurs, if they stand up for themselves or not, and if they get proper support from someone else. Ongoing bullying can have the same effect as listed in #3.

Read Kids and Bullying: 5 Things To Talk About

These are the result of the trauma explained above.

I call this trauma “the invisible wound” because so many people are unaware they have been injured in this way. This is caused by something that went missing that ought to have taken place.

7. Academic challenges without help or support.

Having academic challenges isn’t traumatic all by itself. What causes the trauma is what comes next. Is the child belittled, ignored, or helped. The first two will cause trauma while the latter might avoid it.

Read 4 Types Of Parenting Styles In Psychology: What Kind Of A Parent Are You?

This delivers a trauma that is oftentimes overlooked but can be avoided or lessened if another father figure steps in to support.