How Smartphones and Social Comparison are Making Us Unhappy? 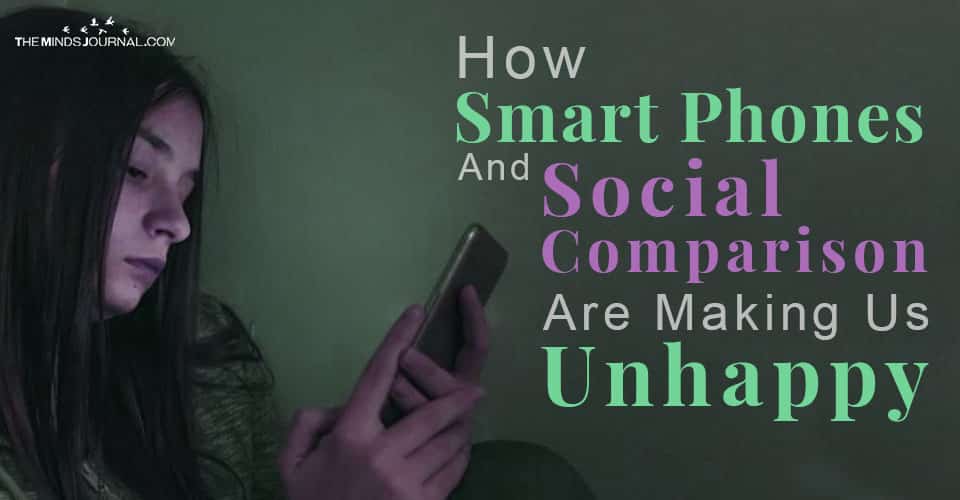 Your smartphone could be making you miserable. Young Americans today are facing levels of stress, anxiety, depression, and other mental illnesses that are higher than they were a generation ago. And the rest of us aren’t doing much better.

According to the CDC, 1 in 10 Americans suffers from some form of depression.

(1) People between the ages of 18-24 report the highest incidences.

(2) 40 million of us over the age of 18 have an anxiety disorder, and as the APA pointed out in its recent report Stress in America millennials are the hardest hit.

(3) Suicide is the third leading cause of death for youth between the ages of 10 and 24 claiming 4600 lives per year.

Related: Essential Steps How To Combat of College Depression and Anxiety

This is a society that has more wealth than much of the rest of the world combined. What’s happening here?

Some claim better reporting—that we have better mental health resources in place and more people are aware of their psychological problems than they were a generation or two ago. Others point to common sources of stress such as money problems, economic instability, family relationships, personal responsibilities, lack of job security, and unemployment. While these may all be contributing factors, there’s another unrecognized piece of the puzzle that I believe is driving much of our discontent. And it’s right in your pocket.

Related: Social Comparison – Two-sided Sword That We Should Be Careful To

We, humans, love to compare ourselves to the people around us. Even when we are reasonably happy with what we have, once we compare ourselves to someone who has something better we become dissatisfied. You may have experienced a similar effect watching episodes of Keeping up with the Kardashians. Interestingly, this social comparison tendency seems to be innate in primates and has been shown even in animal models.

Frans de Waal has an enlightening and entertaining Ted Talk where he shows an experiment he conducted on capuchin monkeys illustrating social comparison and resource acquisition in much the same way humans do:

There are two monkeys in adjacent cages. They are rewarded for handing a researcher outside the cage a stone. The first monkey successfully gives the scientist a stone and is rewarded with a piece of cucumber.

Monkey #1 is satisfied and enjoys his reward.

Then monkey #2 completes the same task, but is given a grape which he eats with relish. Monkeys like grapes a great deal more than cucumbers so when they are tested again, things get interesting.

During the second round of tests, monkey #1 once again successfully hands the researcher a stone and is given a cucumber. He puts the cucumber to his lips, looks at the researcher, then reaches outside the cage, throws the piece of cucumber at the scientist and shakes the cage.

On the second round, monkey #2 once again enjoys a grape. As you might imagine, by the third round monkey #1 appears positively outraged by the cucumber. Shaking his cage, making noise, throwing cucumbers at the researchers and so forth.

What was once fine—the cucumber—is now no longer even acceptable in light of the possibility of enjoying a grape.

Data on income disparities in people show similar results. The amount of money you make is not a good indicator of life satisfaction alone. Rather it’s the rank of your income within a comparison group that seems to matter most.

(4) We see this quite clearly in communities where income disparity is highest. A measure sometimes called The Robin Hood index plots household incomes in specific neighborhoods on a single graph. In places where the Robin Hood index is highest, we see greater instances of violence and homicide.

(5) It’s not just the amount of money people make, but income inequality that seems to drive these behaviors. This kind of social comparison probably started as an adaptive behavior in animals as much as 540 million years ago.

How do we know this?

Well, our ability to compare is connected to the ability to choose between richer and leaner reinforcement schedules. If you didn’t do that, it would be really bad from a survival standpoint.

Animals have to be able to look around and see which field is more likely to yield good food. As socialization developed, this ability to compare stretched into the realm of the community as well.

If you look around and see another group or person is doing better than you, you may sidle up to the other group and make friends. If you’ve got a hunk of meat and I don’t, I’m going to go over and stand next to you. Maybe you’ll share or I might even be able to steal it from you.

Fast forward 540 million years and we have developed technology and cognitive abilities based on relational learning that put this process on steroids. We don’t have to get angry over cucumbers – we can compare ourselves with little more than cognitive labels. Who is hot, who is cool, or anything in between. We can be upset over what is fair or unfair, based on complex ideas of “fairness.” That process was known even in Biblical times, as the story of the workers in the vineyard shows (Matt 20: 1-16).

But now science and technology – that mountain of achievement based on human cognition – has given us the capacity to compare ourselves to anything or anybody, anywhere or anytime. And that brings us back to your smartphone.

Related: How Technology Is Ruining Marriage And Relationships

A Tool for Social Comparison

Right now, you have a device in your pocket or purse that allows you to carry out social comparisons like the ones illustrated above constantly and with ease. It’s called your smartphone. With it, you can see what’s going on anywhere in the world at any time.

Think about what this creates. No matter how successful you are, you are not a gazillionaire. And you can see how gazillionaires live with the push of a button. You can see how the rich and famous life, what movie stars do in their daily lives, what they have that you don’t, how they live that you can’t.

The disparity is transparent, and it pushes ancient psychological triggers we developed for important evolutionary reasons.

So how do we manage this?

We aren’t going to create a world that’s good enough for everybody. It’s not possible. Not everyone is going to become Bill Gates. Even if we could, it would never be enough. After all, most Americans are wealthy beyond imagination in comparison to the rest of the world community and we still have epidemic rates of anxiety, depression, and a host of other mental illnesses.

And we’re not going backward. No one is going to take out their iPhones and blow them up. What we have to do is create modern minds for the modern world.

The question is what does that mean and how do we do that?

The modern world is one in which we have to be Olympic class psychological flexibility experts, just to get along. We have to teach and find a way to be more emotionally, cognitively, and behaviorally open and aware, we have to learn how to take the perspective of others, to feel a little of what they feel, and to stick with those feelings even when it gets rough.

We need to create a more accepting, mindful, values-based, caring, compassionate world, and we have to start right here, right now in our hearts, in our families, in our schools, in our community, in our culture, our nation, and our world. The tools are out there, right now. Heck, you can find them on your smartphone.

For information on my trainings, go to www.praxiscet.com

If you are a professional or student, join the ACT or RFT list serves (set inside your ACBS membership page: see http://contextualscience.org/ACBS_listserv_faq

Steven C. Hayes is Nevada Foundation Professor in the Behavior Analysis program at the Department of Psychology at the University of Nevada. An author of 44 books and nearly 600 scientific articles, his career has focused on an analysis of the nature of human language and cognition and the application of this to the understanding and alleviation of human suffering. He is the developer of Relational Frame Theory, an account of human higher cognition, and has guided its extension to Acceptance and Commitment Therapy (ACT), a popular evidence-based form of psychotherapy that uses mindfulness, acceptance, and values-based methods.View Author posts