How Being An Empath Can Ruin Relationships 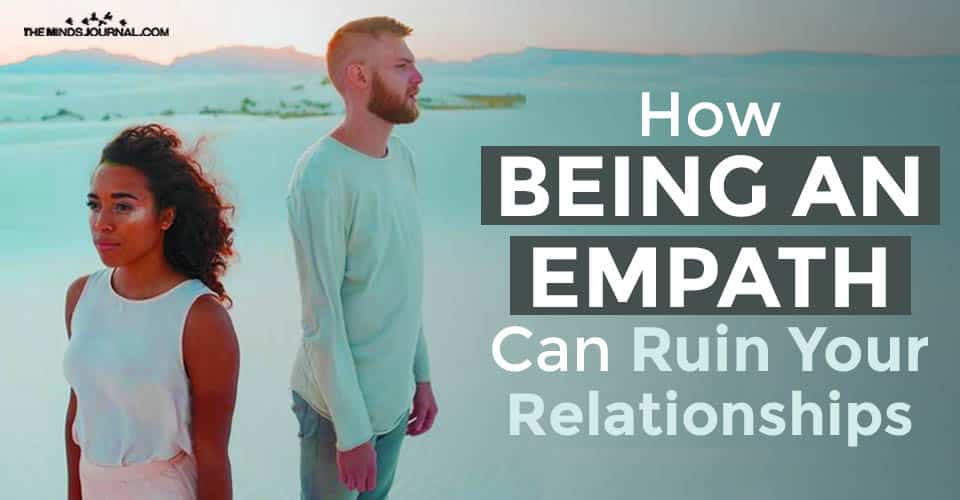 Do you consider yourself as an empath? If yes, then you might know and understand how difficult it can be, being an empath sometimes.

Empaths and relationships. It’s that underbelly hot topic that many people in the “New Age” community tend to ignore. But I think it’s important to understand the Shadow aspects of all things, because the more self-awareness we become, the more growth and expansion can occur in our lives.

One of the biggest problems I’ve seen (both in my own life and with empathic clients I’ve worked with) is the issue of co-dependent relationships. Most empaths see this happen in their lives at least once, if not over and over.

It can be hard for an empathic person to learn healthy boundaries because they naturally (and subconsciously) spend so much time exploring other people’s auras, that it can be difficult to know where they end and the other person begins.

I found this article to be highly informative, honest, and exactly the tendencies many of us empaths need to understand about ourselves in order to develop healthy relationships and break the damaging patterns of co-dependency.  I hope it helps shed light on some of the more destructive aspects of empathy.

Fourteen years ago, I discovered I’m an empath. I always knew, even as a child, that I felt others pain, but it was good to discover that intense sensitivity had a name.

Empath Guide defines it well: Criticism, suffering, hurt, humiliation, shame are hard enough for me to bear. Watching others feel them is agonizing. Knowing I’m an empath explains a lot about my interpersonal struggles. It can ruin or heal relationships.

Here Are 8 Reasons Why Being An Empath Can Ruin Relationships

It’s like I live inside their heads and hearts. I understand others’ motives and reasons better than they sometimes do. I make excuses for them they’ve never thought of.

It’s like having the weight of the world, with all its sin, hurt, and sorrow on our shoulders.

Want to know more about how being an empath is extremely tough sometimes? Read 15 Things That Lead To Frequent Emotional Burnout in Empaths and HSP

As an empath mom and wife, I feel a flood of compassion, sympathy and closeness with my family. That’s good, except that I worry about them 24-7-365. I could easily become a “smother mother.”

I read about a mom who couldn’t let her kids out of her sight for fear something might happen and she wouldn’t be there to stop it. I know how that feels. Other parents, sometimes spouses and kids, most of society doesn’t get that.

They just think we’re over-controlling, helicopter paranoiacs. We are. We have to be. Empathy dictates that we be constantly vigilant.

4. I Try To Control Others.

Because empaths feel everyone’s pain, we start to believe we’re responsible for it and can stop it. The guilt is all-consuming.

To assuage it, we try to correct, fix, and change others’ behavior. We hope to stop them hurting themselves and us by default.

I had my empath epiphany at a roller-skating party. A stranger fell and broke her arm. I began to sob and shake. I was incoherent. I felt her arm pain, shock, and fright. My friends felt sorry for her but were horrified by my reaction. One said, “Mar, you really take the gospel injunction to ‘bear one another’s burden’ seriously!” They acted wary of me after that. And these were friends.

If friends can’t take extreme empathy, imagine how raw an empath is with unsafe people. We easily fall prey to victimizers and predators.

I have been scolded, shamed, punished, abused, mocked, and taken advantage of because of my empathy. Empaths are an addict’s codependent-mate fantasy!

Looking to know more about how being an empath can be a curse sometimes? Read 6 Ways Empaths Sabotage Their Relationships

Being able to get inside someone else’s heart is a double-edged sword. I’ve seen things that will never cease to traumatize me. Compassion frankly hurts. And all the while I’m being hurt, I kept on empathizing.

I intuitively understand where behavior comes from. I can never really be angry with anyone because I can’t distance from them. Anger at someone else is just anger at myself.

8. I Have Panic Attacks.

This part is the hardest to admit, but the most necessary for me and other empaths to hear. In my agony, I have melted down and hurt myself and those I love. Weird isn’t it, that I would hurt those who I worry most about protecting. I used to feel unbearable guilt for this.

Now I realize it’s the logical result of so much inner torment. When loved ones do things to hurt themselves, they’re hurting me doubly. When I rage at them, it’s myself I’m livid with.

My story is still being written, but I think it’s going to have a happy ending. I’m fortunate to have a loving family who supports me. I’m learning to recognize obsessive empathy and redirect it. I’m using this existential crisis to understand myself, my relationships and my purpose. I’m seeking positive outlets so I’m not engulfed by angst. I’m finding healthy diversions and channels for my empathy.

If you want to know more about how being an empath can ruin relationships, then check this video out below: