9 Traits of Manipulative People To Watch Out For 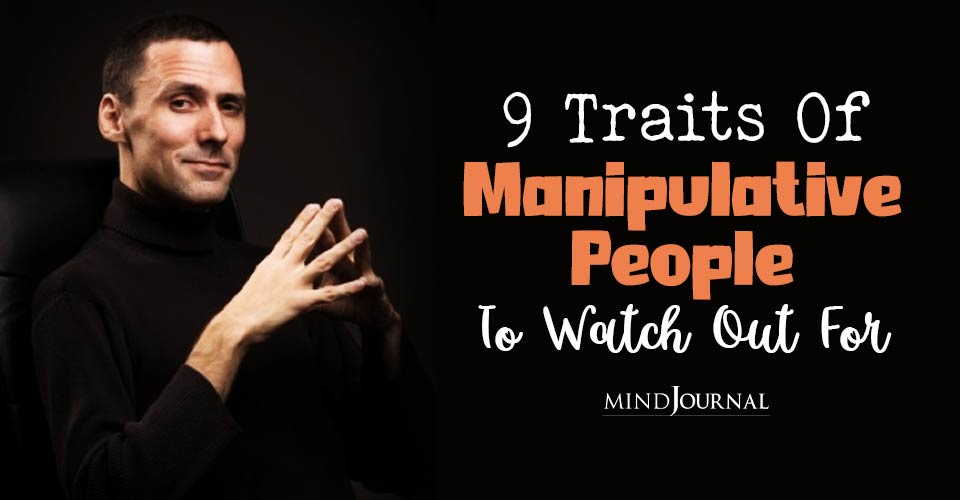 Some people pretend to be nice but are trying to control you. Take a look at classic traits of manipulative people to know what you’re dealing with.

Can you easily recognize the characteristics of a manipulative person?

Well, a lot of people feel they can.

But the problem with this assumption is that we don’t realize that sometimes manipulative behavior might not be as overt as we think it is.

Yes, sometimes you may not be able to recognize manipulative behavior because of the fact that the person who is indulging in such behavior is doing the same in a very covert way. And that is surely a dangerous thing, isn’t it?

1. They know what to say at the right time

Yes, they are smart. They will say the right thing at the right time. You will probably not be able to know this because you will think that they are just saying what they want to.

But manipulative people have it all planned. They don’t say things out of the blue. They know what they have to say to their target and they will say it and even capitalize on it.

Related: 7 Common Manipulative Phrases and How To Shut Them Down

2. They play their games very casually

They manipulate so casually and flawlessly that you won’t be able to catch them. The games they play are not that easy to comprehend but the games are very, very subtle. They might manipulate you with a sentence, a word, or even without saying anything.

You won’t even see them trying too hard to affect your behavior because they are sharp and they don’t treat anyone as an easy target which is why they don’t openly manipulate but do it casually so that no one can catch them.

3. They are possessive by nature

Manipulative people are very possessive by nature and they just want to own you. They want to know everything about you. This possessive behavior also comes from the fact that a manipulative person is insecure and thus they try to control the people around them.

They might behave like you are their best friend but they won’t act on it. This means that the realm of the manipulative people is merely words. They don’t support their words by actions of any sort. They just speak to manipulate you and then use you for their own benefit.

5. They tend to forget boundaries

Yes, these boundaries might be physical or emotional. Manipulative people begin by pretending that they respect and care for your privacy but the truth is that they are just showing that so that they can play with the boundaries that you have established.

You won’t even realize when these manipulative people will forget boundaries and start to enter your comfort zone.

Related: 15 Red Flags That You Are Dealing With A Manipulative Person

6. They never apologize, ever!

Even when you question their intentions or catch them in the act of manipulating you, they will not apologize. Instead, they will give some explanation which might seem like an apology but the matter of the fact is that they are merely justifying their behavior which they have already rationalized in their own mind as well.

7. They manipulate you in their domain.

8. Negativity is spread by them

9. They don’t give you time to change your opinion

So they influence you in such a way that there is no time left for you to think anything other than what they have said.

Take care of yourself and don’t get affected by such people.

If you want to know more traits of manipulative people, then check this video out below:

previousThe MOST Psychic To The LEAST Psychic: Zodiac Signs RANKED
next25 Uncomfortable Changes You Need to Make Your 20’s Regret Free