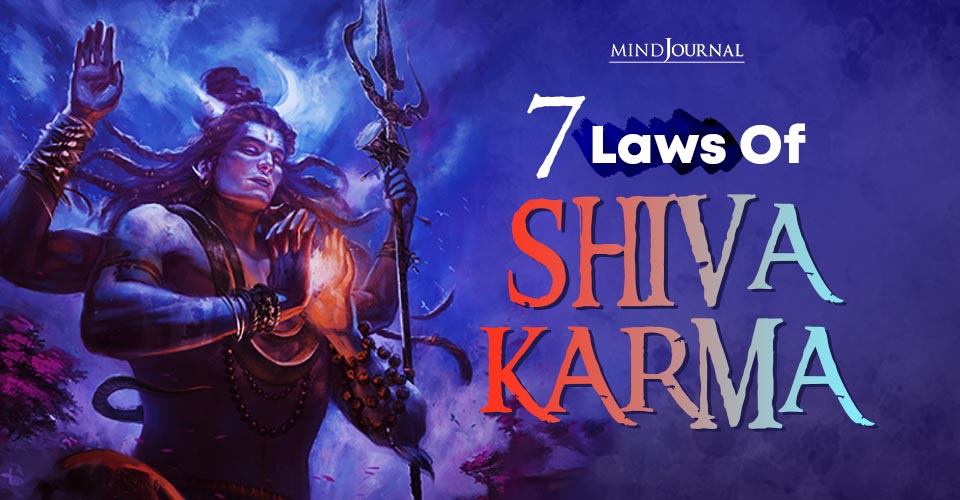 Did you know that the cycle of cause and effect of our actions will affect our lives in some way or the other? The 7 laws of Shiva Karma can help you achieve the highest form of enlightenment and existence.

Lord Shiva which is a ‘Hindi’ term has originated from a beautiful concept of E + Shav = Shiva (Shav = Dead, and E = Energy). It means when energy flows into the dead body; it starts to live, hence called Shiva. Which only denotes, we’re all born Shivas.

Shiva, the most important God in Hinduism and the crucial one in the trinity of Brahma, Vishnu, and Mahesh (another name of Shiva) represent Creation, Preservation, and Destruction respectively.

It is not me who is saying this, but everything which you’ll read here is an excerpt from a beautiful mythological book, ‘Dev Se Mahadev’.

The author of the book reads the entire ‘Shivpuran’ to understand Shiva as religion, which is known as ‘Shiva Dharma’. He also researched well on the counterpart of mythology, science, to connect them both and bring forth a concept that helps people understand different types of laws of ‘Shiva Karma’ to follow in their lives to attain the highest form of existence.

The first law of Shiva Karma is the truth. This law asks the followers to follow the path of truth, justice, and being true to themselves and those who are around. Remember that dishonesty and false deeds may prevail in small battles, but the truth always wins the war.

Read What Kind Of Karma Do You Have? – Find Out With This Interesting Quiz

3. Everything is an illusion.

No matter what life you’re living, at what place you are; if your happiness depends on the materialistic things you own, then happiness is an illusion for you, and it’ll be gone with that thing. The third law of Shiva Karma asks believers not to attach their happiness to earthly things.

Read 3 Karmic Lessons That Will Enlighten Your Path

The world we’re living in is growing more self-obsessed. Everyone is worried about their happiness and doesn’t care if people around them are happy or not.

However, real happiness is beyond limits, and it could be felt only when we have found the seed of knowledge within us, and we’re truthful with others and ourselves. Remember, happiness comes from within, not outside.

If you may have noticed a happy person around you, you’ll see that the illusion does not control them. You put them in any situation at any place; they’ll be the same calm and content in their mind. So, the fifth and one of the most fundamental laws of Shiva Karma is practicing to be formless like water.

6. Using all your senses.

When our mind is at peace with our heart, and we walk on the path of self-realization, all our senses come together to work in proper synchronization. When you achieve this state in your physical form, the feeling you get is incomparable.

IRead 12 Laws of Karma (That Will Change Your Life)

With these laws of Shiva Karma, you achieve enlightenment. The highest form of existence for a human. In this state of mind, you attain self-realization along with the proper understanding of nature and reality.

Enlightenment is the final state, and it can be achieved in this life only, without sacrificing the domestic life.

If you want to know more about the laws of Shiva Karma which will help you attain the highest form of enlightenment, then check this video out below: