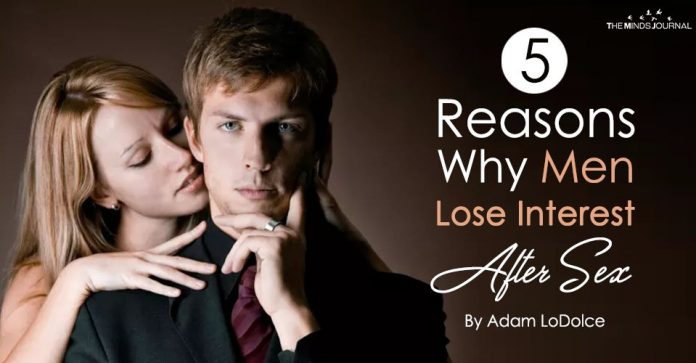 You waited until you’d dated a guy for several weeks before sleeping together. Though you were hot for him and curious about what getting in the sack would be like, you made a conscious effort to get to know him and trust him first.

Except…after you slept together for the first time, he grew distant. Maybe he started taking longer to reply to your texts…or ghosted altogether.

WTF? Why do men lose interest after sex? What did you do wrong?

If you’re like most women, you will never know why this happened or how to prevent it from happening again. You might be hurt and start to build a giant wall around your heart, brick by brick. You must protect yourself.

But you aren’t going to be that woman. I won’t let you. In this video, I am going to lay it all out there for you so that you understand why this happens. I’ll reveal the secrets that men won’t tell you about why they lose interest after sex.

Men can be funny creatures, can’t they?

We can sit around and argue about football statistics for hours…

We can focus intently on a video game for weeks, only coming up to eat and shower…well, eat, anyway.

We can change a tire in 10 minutes, yet it takes us a century to get our laundry done…

And when it comes to love and sex, sometimes we don’t know exactly why we do what we do. Especially sex. There’s this thing called the reptilian brain that essentially seeks out sex and pleasure without regard to the consequences.

That doesn’t justify men losing interest in you. I’m just saying there’s a scientific component to this situation. Let’s dive in and learn more.

The best you can do is understand some of the reasons they back off after having sex with you, and figure out how best to respond.

1. All He Wanted Was Sex…and Nothing More

At a certain time in some guys’ lives, sex is all they want and they will do anything to get it.

Or 50s. Sorry ladies. There’s no precise window of time I can inform you of. It’s different for every guy, and this isn’t even the case for every guy.

Guys who let that reptilian brain lead will work hard to win your heart, schmooze you, and get you to open up to them.

Once they’ve gotten what they wanted (sex), the game is over. The thrill of the chase is gone.

It may hurt. You might want to scream and stomp your feet, but you can’t take it personally. It’s just the reality of life sometimes.

For some men, sex boosts their self esteem. I mean, what could give a man more of an ego boost than a scantily-clad woman who wants to get frisky with him?

But get this: it’s not your job to boost his self-esteem. And likely, he won’t keep that confidence high with having just you as a partner. The kind of guy we call a player is one who becomes practically addicted to conquering his “sexual prey” in order to keep that self-esteem high. That means multiple partners for him, and lots of heartbreak for you.

And still others guys have sex to feel they have control over others. If there’s nothing substantial in your relationship with this man beyond what happens in the bedroom (and he gladly takes control there), this might be the case.

All that being said, what can you do about the guy who only wants sex from you? Look for the signs before jumping in bed with a new paramour.

If he only texts late at night or gives no effort to make plans that involve being outside of his home, take note of that. If his perverted jokes tip the balance beyond what you’re comfortable with, ask yourself why sexual innuendoes are his go-to sense of humor.

If he encourages you to drink more than you normally would on a date, push back. Drink slowly, drink lots of water, and don’t leave your drink unattended (better safe than sorry).

If everything adds up to it seeming like this guy isn’t all that interested in you with your clothes on, move on. You won’t change his mind once you’ve slept with him, and you’ll likely regret taking it that far if you’re looking for Mr. Right.

Maybe this guy had every intention of becoming your boyfriend. He thought he was falling for you in the early days…then you had sex.