15 Things You Do Because You Are A Highly Sensitive Person 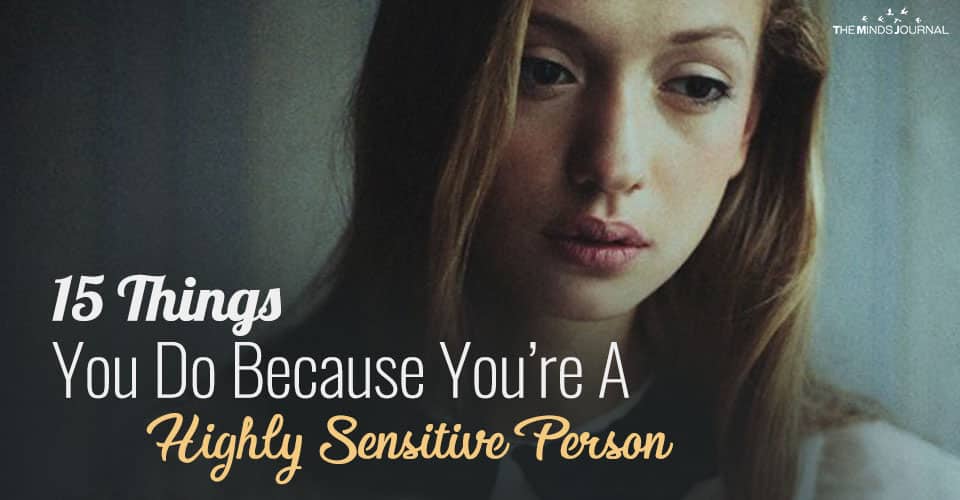 Being a sensitive person and showing your sensitive side is perceived to be a weakness by many. But the truth is, it is the exact opposite of weakness; sensitivity shows what a strong person you are.

In a world that is gradually losing its humanity, being a sensitive person is like being a diamond in a mine. Your soft-hearted nature and pure soul makes you who you are, and what the world needs in these terrible times.

That can be bad for some people, but it’s not. Actually, highly sensitive people tend to understand others better and they are also very helpful! According to research, sensitivity can be perceived as an asset or a negative trait, depending on the culture. For example, in Thailand and India, highly sensitive people are almost never teased. In North America, things are completely different.

Read Why Highly Sensitive People Get Bullied In Life

3. Your Emotions Are Really Deep

In fact, highly sensitive people can feel in a deeper way than the ones who are less sensitive. They tend to process things really deeply. As Ted Zeff states: “They’re very intuitive, and go very deep inside to try to figure things out.” Ted Zeff, Ph.D., is the author of The Highly Sensitive Person’s Survival Guide and other books on highly sensitive people.

4. You Tend To React More In Tough Situations.

Highly sensitive people are also more reactive. They act with empathy when they listen to a friend’s problem, for example. In addition, they seem to care more about others’ reactions in case something bad happens.

5. You Are Not Too Spontaneous.

On the contrary, highly sensitive people have a hard time making decisions, since they want to check every single detail. This may sound a little anxious, but in fact, careful decisions can save them from a lot of trouble. As Aron writes in a recent issue of her Comfort Zone newsletter, highly sensitive people can find it easier to make a decision by following some steps:

“Take as long to decide as the situation permits, and ask for more time if you need it and can take it. During this time, try pretending for a minute, hour, day, or even week that you have made up your mind a certain way. How does that feel? Often, on the other side of a decision, things look different, and this gives you a chance to imagine more vividly that you are already there.”

6. You Hate It When You Make A Bad Decision.

Highly sensitive people get really annoyed with themselves when they realize that their decision was “wrong” or “bad”, according to their criteria. As Aron explains, the reason why highly sensitive ones can’t stand making a mistake is that “the emotional reactivity is higher”.

7. You Are Very Observant.

In fact, highly sensitive people tend to notice every single detail in a room by the moment they walk into it!

8. People Think You Are Introverted… But Not All Of You Are!

As Aron states, only 30 percent of highly sensitive people are extroverts. What is essential about them is that most of the times these sensitive but extrovert people have grown up in a close-knit community and had the chance to interact with many people.

9. You Can Co-operate Really Well.

As we previously said, highly sensitive people are really careful and watch every detail. That’s why they are also perfect workers. They make good decisions, can take great responsibilities and they are really thoughtful. For example, if a highly sensitive person worked in a medical team, they would be great in counting the positive and negative reasons why a patient should or shouldn’t have surgery.

10. You Suffer From Anxiety And Depression

But that’s true only for those who’ve experienced something bad. According to Aron, “If you’ve had a fair number of bad experiences, especially early in life, so you don’t feel safe in the world or you don’t feel secure at home or … at school, your nervous system is set to ‘anxious,'”. Being surrounded by supportive family members and friends can really help a highly sensitive person face his anxieties and fears. “You can’t over-protect them, but you can’t under-protect them, either. You have to titrate that just right when they’re young so they can feel confident and they can do fine”, Aron explains.

11. You Get Annoyed Very Easily.

… especially if it is an annoying sound. Well, everyone hates annoying noises more or less, but highly sensitive people are even more “fragile” when it comes to this. As Aron explains, that happens because they tend to be more easily overwhelmed and overstimulated by too much activity.

12. You Hate Violent Or Horror Movies.

We all remember that friend who’s always whining: “Please, let’s watch another movie! I won’t be able to sleep at night!”. Empathy and overstimulation can explain this situation too. You may call them fearful but they’ve got stronger emotions than you have.

As Zeff underlines, highly sensitive people rarely put themselves in situations where they will be made to feel embarrassed for crying easily. What their friends and family need to understand is that crying easily is not a sign of weakness but a form of expression. In other words, people let it all out. Crying can really make you stronger because you get rid of all that made you feel bad.

Read about: 6 Reasons Why You Cry So Easily and At Times Even Without A Reason

Highly sensitive people are also highly conscientious people, Aron states. That’s why they will probably be considerate and exhibit good manners. They also tend to notice when someone else isn’t being conscientious – and they disapprove of it.

Read The 8 Types of HSP: What Type Of A Highly Sensitive Person Are You?

15. Criticism Can Affect You A Lot.

Highly sensitive people have reactions to criticism that are more intense than less sensitive people. That’s why they may employ certain tactics to avoid said criticism, including people-pleasing, criticizing themselves first, and avoiding the source of the criticism altogether, according to Aron.

Has anyone told you that you are too sensitive, or that you overreact sometimes? Well, you are not too sensitive and sensitivity has more benefits than you'd realize.

Well, everyone has their own reactions. Some of us are more sensitive than others. There is nothing wrong with the skill you’re born with. Being sensitive and empathetic is a blessing rather than a curse.

I’m happy to share this selection from Thriving as an Empath with you: Many of us have received messages from parents, teachers, friends, or the media that being sensitive is a fault or weakness.

It’s important to gently re-evaluate old ideas about yourself such as “Im too sensitive,” “Th

Do you feel that emotional strength is a gift? If yes, then being an empath is surely a blessing. To be able to feel and care for everyone and everything, it's a very special thing to be chosen for.

The empaths journey is the adventure of a lifetime. Sensitive people have much to be grateful for. You are able to experience exquisite passion and joy. You can perceive the big picture on a deep level. You are attuned to the beauty, poetry, and energy of life, and your compassion gives you the capacity to help others. You are not callous, shut off, or cold-hearted. Your sensitivities allow you to be a caring, vulnerable, and aware being.

Why Being an Empath is A Gift?

Empaths have a special relationship with nature. You feel a kinship with animals, flowers, trees, and clouds. You are drawn to the peace of the w

The 7 Superpowers of Sensitive Souls

Do you know that sensitive souls have super powers?

Like most superheroes, I’ve learned to keep my powers hidden and quiet. Only those closest to me know. And like most superheroes, I grew up thinking I was fundamentally flawed because of my powers. Of course, before I realized the superhero thing, I didn’t consider them “powers” nor did I see them as positive. I considered them weird quirks that isolated me from everyone else and I saw them as a curse.

Having found my w

Aggressive people are always coping with issues within themselves. Their aggression, rage, and abusive behavior are driven primarily by unconscious defensiveness. Managing high conflict people can be very difficult. Especially if you're in a relationship with one, it gets really tough to resolve issues with your high conflict partner. Here are some 7 tips for dealing with aggressive people.

They feel right and blameles

Using intuition to make a decision can be tricky for analytical people. In rational decision-making, the need for practical and logical arguments and careful analysis come high in priority. But intuitive decision making relies on unconscious intelligence created from past experiences and learning which makes it the key component of effective and smart decisions.

As an intuitive psychiatrist, I worship my high octane intuitions. I owe the blessing of becoming a physician to one. However, at twenty, when an unwavering inner voice told me I was going to medical school, it was the last thing I thought I wanted.

This gut-centered voice committed to your happiness, health, and survival, is, with practice, accessible to everyone. But when you deviate even a nano-fraction from your inner voice, energy wanes, whether a subtle seepage or radical bottoming