Why Highly Sensitive People Get Bullied In Life 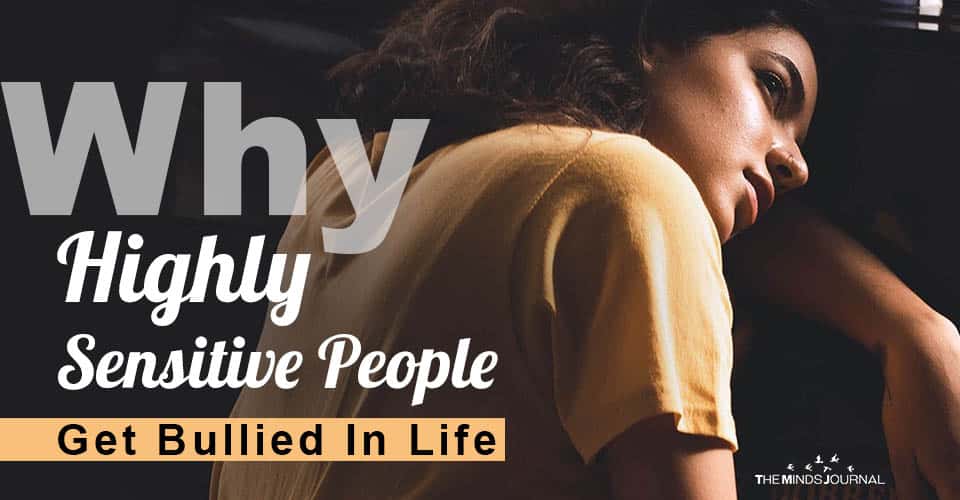 I had an “Aha” moment today.

The reason highly sensitive people get bullied so often isn’t because of our sensitivity. It’s because of the dismally low self-esteem that tends to go along with being that sensitive, especially if we were victimized by malignant narcissists and bullies when young.

Narcissists hate high sensitivity in others for two reasons:

Their hatred and fear are expressed through love bombing followed by bullying and other forms of abuse meant to weaken the HSP. An HSP’s fragile ego can be destroyed or greatly diminished after years of bullying and abuse.

Sharon: an HSP who carried a can of Narc Repellent.

I was thinking about a woman I used to know named Sharon. She was an empathic young woman who felt everything so deeply–but mostly joy and love. She’s exquisitely sensitive but is also self-confident (she was raised by very loving parents). She is comfortable enough with herself to show her vulnerability openly, allowing herself the liberty to feel all her emotions as well as share the emotions of her friends.

You might think Sharon is a magnet for bullies, but she’s not. She makes friends easily because she has such a loving and positive presence and people feel like she cares about them, and she likes herself too (without being at all narcissistic). They are right.

Narcissists avoid Sharon like the plague. Why? They would probably love to get their hooks into her if they could, but Sharon’s confidence in herself and easygoing comfort around all kinds of people scares them right off. While still being emotionally vulnerable, Sharon is invulnerable to narcissists because they sense her strength. She’s indestructible and they know it. As a result, Sharon is never victimized and tends to attract other loving people as her friends, people who just want to be around her because she’s a lot of fun but can also cry with you if that’s what you need.

If you’re a highly sensitive adult whose self-esteem has been destroyed by narcissistic abuse or a sensitive kid who has become insecure and fearful because of bullying, your high sensitivity will be expressed very differently than someone like Sharon.

Sensitive children do get tested by school bullies, and it’s harder to not let that damage your self-image when you’re so young, especially if your parents are also bullies and have already done a number on your self-esteem. But for an adult, most people will admire emotional openness and vulnerability or at least respect it–as long as they also know you respect and love yourself. People can sense when you’re comfortable in your own skin and narcs will stay far away, because they’re only attracted to codependent types who are unsure of themselves or their place in the world.

Watch this video to know the strengths of a highly sensitive person:

Being highly sensitive: a curse or a blessing?

A sensitive person who hates herself will tend to act in ways that attract mean people and bullies to them. They are unsure of themselves, fearful, easily depressed or discouraged, easily hurt, easily frustrated, paranoid, hypervigilant, and insecure. They are afraid of everything, and like ravenous wolves, narcissists can smell their fear. So, highly sensitive people always get bullied. They see this–not the underlying sensitivity–as weakness, and they will horn in on such a person for narcissistic supply or bullying because they’re an easy mark who will be too afraid to call them out on their abuse.

Things are very different for a sensitive person with high self-esteem. Such a person will be appreciative, insightful, observant, compassionate, forgiving (but not stupidly forgiving), affectionate, creative, a good listener, empathetic, and with a well developed (but never mean or sarcastic) sense of humor. They are not fearful and they know their place in the world. They have a clear sense of their own boundaries (and those of others) and know how to enforce them if they think they’re being violated. They attract people like themselves as friends and lovers and these relationships tend to be self-reinforcing for both parties.

Narcissists know a strong HSP is powerful and dangerous to them.

Malignant narcissists stay away from self-confident HSPs because they know they’re much stronger than they are. They know they’re dealing with an authentic person who is happy with themselves and with life, while they are anything but. They know a confident HSP (not the same thing as narcissism) has a laser-like ability to see through their mask without fear and won’t hesitate to call them out when it’s necessary. To a malignant narcissist, a self-confident HSP is a very dangerous and powerful person. That’s why they work so hard to destroy our self-confidence and make us hate and doubt ourselves. If we’re crippled by abuse, they can still get what they need from us (supply), without running the risk of having any damage done to them.

As my confidence has grown over these past two years, I’m noticing a transformation of my lifelong high sensitivity from something that made me feel weak and helpless for most of my life into something that makes me feel strong and authentic. I know now that this “curse” and “weakness” I was born with is really a blessing and a strength. I just needed to develop enough confidence to be able to use it effectively.

Learning to love your high sensitivity.

Here’ a few things I have learned.

1. If you have a talent or skill in one of the arts, use it to express what you’re really feeling. Painting, singing, dancing, writing, poetry–can all be ways we can release our deepest emotions in a “safe” way that’s socially acceptable. Don’t hold anything back when creating art, performing, or writing. Allow yourself to be vulnerable even if it feels weird and awkward at first.

Related: 9 Things That Every Deep Thinker With A Sensitive Soul Will Understand

2. If you don’t have artistic talent, take up a hobby that speaks to you or gets involved in a sport such as running or take a martial arts class, which can build confidence. Activities that center you and build both inner and outer strength, such as yoga, can be helpful too.

3. Always be 100% honest about your emotions. If you’re very shy or fearful, write down your thoughts and feelings in a private journal. Don’t worry about the quality of writing–that’s all just gravy. The main point is to get your feelings down on paper. Seeing your thoughts on paper (or a computer screen) will give you clarity. If you choose to blog publicly instead, you will gain confidence from expressing your most private feelings to the whole world and from the feedback from others you will get. It can be very scary to publicly post something you wouldn’t tell your next-door neighbor (as I have now twice this week!) but believe me, it’s worth it. You’ll be amazed at how much doing such a thing will increase your confidence and sense of inner strength. At first, you’ll feel like you’re running around naked in public, but you’ll be amazed by the sense of freedom and liberation running around naked can give you!

Related: The Beauty of Feeling Everything Deeply

4. Every day, try to do one nice thing for someone other than yourself. If you’re really ambitious, you can try volunteer work to help the poor, homeless, children, animals, or anyone more vulnerable or less fortunate than yourself. In doing so, you will feel like you have a purpose, and that you can help others. Knowing you have made someone happier will raise your self-esteem.

5. Listen to music whenever you can. It’s second only to writing and blogging in my healing journey.

Related: The Difference Between Empaths and Highly Sensitive People

6. Surround yourself with positive people (not the same thing as positive-thinking Nazis, who are often narcissists themselves) but authentic, happy people who accept you for who you are and don’t judge you.

7. Get narcissists away from you. No Contact is best but is not always possible. If you can’t separate from your narcissist, read as much about their disorder as you can, and read about PTSD and complex PTSD and the devastating effects these character disordered people can have on the rest of us. Read books about highly sensitive people. Elaine Aron’s The Highly Sensitive Person is probably the best known (and an excellent book) but there are other books about HSPs too. Write down your feelings in a journal your narcissist cannot access.