15 Signs You Are A Victim Of Gaslighting 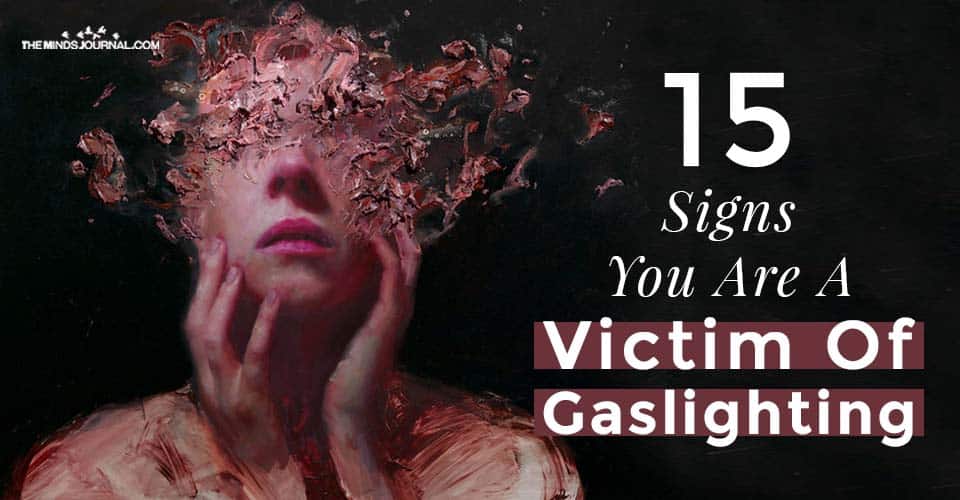 Are you a victim of gaslighting? Are you always made to feel that whatever happens, in some way or the other, it is your fault?

The only way you can describe how you feel is that you feel minimized. You feel crushed and smothered. You’re constantly second-guessing yourself; your feelings, your perceptions, your memories, and a small, suffocated part inside of you wonders whether you are actually going crazy.

You feel neurotic, you feel hyper-sensitive and you feel an overwhelming sense of alienation.

What is wrong with you?

If you can identify with what I just wrote, you are most likely experiencing a sophisticated manipulation technique known as Gaslighting. This technique undermines your entire perception of reality and can slowly creep into your relationships, friendships, family life, and work life.

Are you a victim of gaslighting? Read Singed and Spinning From Gaslighting: An Emotional Abuse Weapon Of Extreme Narcissists

Inspired by the 1940 and 1944 films “Gas Light,” where a husband systematically manipulates his wife in order to make her feel crazy, the term “Gaslighting” is now commonly used to describe behavior that is inherently manipulative.

Gaslighting, at its core, is a form of emotional abuse that slowly eats away at your ability to make judgments. Essentially, a Gaslighter spins their negative, harmful, or destructive words and actions in their favor, deflecting the blame for their abusive deeds and pointing the finger at you.

This is often done by making you feel “overly sensitive,” “paranoid,” “mentally unstable,” “silly,” “unhinged,” and many other sensations that cause you to doubt yourself.

Commonly adopted by psychopathic, sociopathic, and narcissistic types of people, Gaslighting tends to eat away at you slowly until you realize that you’re a shell of the former person you were.

Let’s take a look at some examples of Gaslighting.

1. In a family scenario:

Andrew’s father is an angry, bitter man. Every day Andrew is afraid to “tip the balance” of his father’s mood because he often bursts out in fits of rage calling Andrew a “bastard” and a “worthless little loser,” among many other hurtful names. When Andrew confronts his father about this aggressive name-calling, Andrew’s father laughs and tells him “to stop being so sensitive.”

2. In a relationship scenario:

Jade has been married for 5 years and has two small children with her husband Mike. For the past few months, Jade has been trying to establish a small art shop, but when she asks for her husband’s assistance his mood darkens: “I can’t believe you’re spending so much time on this shop—don’t you care about me—don’t you care about your kids? You’re supposed to be mothering them!” he exclaims.

Jade is shocked, “But I just wanted you to help me with setting up the store! And I haven’t been neglecting anyone!” Mike comes up very close to Jade’s face: “You see! Now you’re denying it. When I married you I thought you’d be there for your family. I should just take the kids and go already!” Mike storms off. Later, when Jade sits down to talk with Mike about his threat, Mike says, “Honey, you know you were overreacting, and you know that you’ve been obsessing over this shop too much. That makes the rest of us feel very ignored and excluded, I hope you understand that.”

Do you think you are a victim of gaslighting? Read Gaslighting: 7 Warning Signs He’s Psychologically Manipulating You

Sophie has been working in her department for the past five years when she is given a promotion to migrate to another level of the company that pays a higher salary. However, Sophie has been given a trial period to determine whether she is capable of fulfilling her duties or not. Nervously, she meets with her new supervisor, Kelly. At first, Sophie likes her supervisor and fulfills all of her tasks on time. However, her supervisor begins to ask her to do belittling chores and favors here and there with increasing frequency. While Sophie is fine with helping out, she finds that Kelly is becoming more and more demanding. Finally, as Sophie’s work piles up to an unbearable level, she tells Kelly that she needs to focus on completing her work, but she can help another time. Later, in a staff meeting, Kelly introduces Sophie to everyone and says, “Although she’s not keeping up with us yet, I’m sure she’ll learn to embody our hard-working ethics soon!” Immediately, Sophie blushes and feels publicly insulted and humiliated, fearing for the security of her new job. Later when Sophie asks her supervisor why she thinks that “she is not embodying their hard-working ethic,” her supervisor says: “I think you misunderstood me. I just said that you’re not used to our pace of work so that other people can help you out.” From then on Sophie accepts all extra demands and chores, no matter how much work she has, or how demeaning the tasks are.

How To Know Whether Someone Is Gaslighting You

Gaslighting is so harmful because it promotes anxiety, depression, and with enough frequency in our lives, it can sometimes trigger nervous breakdowns.

So the question now it: are you being gaslighted? How can you know whether you’re experiencing this subtle form of manipulation in your life?

Review the following tell-tale signs: 15 signs you are a victim of gaslighting

1. Something is “off” about your friend, partner, son, daughter, mother, father, sister, brother, colleagues, boss, or another person in your life … but you can’t quite explain or pinpoint what.

2. You frequently second-guess your ability to remember the details of past events.