Singed and Spinning From Gaslighting: An Emotional Abuse Weapon Of Extreme Narcissists 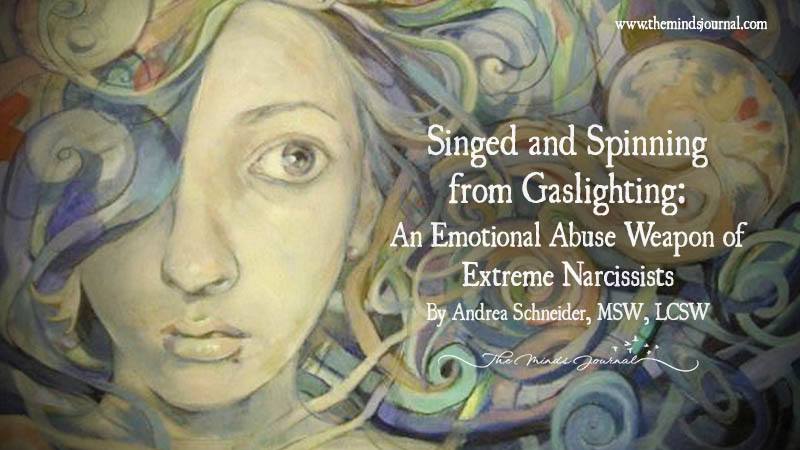 Many have heard of the term “gaslighting,” a weapon emotional abusers employ to maintain or regain power and control over their victims. The movie, Gaslight (1944) starred Ingrid Bergman, Charles Boyer and Joseph Cotten. It was the first work of art to dramatically portray extreme narcissistic abuse and the cunning and calculating tactic of gaslighting, designed to elicit maximum confusion, or cognitive dissonance, in its victim.

Read 7 Signs You Are a Victim of Gaslighting

Ingrid Bergman’s character experiences a whirlwind romance with the Charles Boyer character, the latter of which very insidiously begins to inflict psychological abuse. Suddenly, for no apparent reason, the gaslights in the new couple’s home flicker. Bergman notices this phenomenon, and yet Boyer denies and negates the reality of the situation, suggesting ever so subtly but then more intensely that Bergman is going mad. She begins to doubt her own reality of the situation and believes the insinuations of her lover. Bergman is not aware that Boyer is in fact calculatingly and premeditatedly flickering the lights himself, so as to intentionally cast doubt and create cognitive dissonance in Bergman. Boyer’s character also isolates Bergman from any social support system, so that she is dependent upon Boyer to be the translator of her reality. She increasingly loses trust in her own capabilities of discerning the reality of the situation, which results in anxiety, hopelessness, despair, and dependence on her captor. In turn, Boyer can remain in power and control in the relationship, however sadistically he positions himself.

In modern times, we may not have gaslights, but we do unfortunately encounter emotional abusers who deploy gaslighting tactics in work, community, family and love relationships. When an individual is involved in a love relationship with an abuser, initially, the perpetrator’s intentions of power and control and not readily known to the new love object. Oftentimes, a period of idealization typically occurs whereby a honeymoon stage ensues, and the target falls genuinely in love with (unbeknownst to her) the emotional abuser. Ever so gradually, the extreme narcissist deploys their emotional abuse arsenal of weapons. Gaslighting is almost always one of those tactics. Denying or negating doing or saying something that actually took place is the most common form of gaslighting. The abuser then subsequently moves on to cast blame and doubt at the target for “misperceiving” the situation.

The result of gaslighting is always a sense of confusion and feeling off balance. When a survivor of extreme narcissistic abuse is reeling from the aftereffects of gaslighting, they are said to be experiencing cognitive dissonance. What this means is that the survivor is holding two contradictory thoughts at once in her mind, such as “I love this man, but he is confusing me and making me doubt my perception of reality.” By the time a survivor is experiencing cognitive dissonance, he/she has fallen madly in love with his/her abuser and are only beginning to recognize that there are some very real red flags of extreme narcissistic abuse proceeding forth. When gaslighting is woven into the fabric of the emotional abuse, the survivor is further confused and tends to seek comfort from the source of her pain, her captor. A trauma bond forms in which the source of pain is also the soothing agent, reinforced by many vicious cycles of binding the target to the captor through emotional abuse tactics such as gaslighting.

Read 5 Things That Someone Who Is Gaslighting You Will Say

Survivors of narcissistic abuse can and do heal from the effects of gaslighting and cognitive dissonance by embarking on a journey of self-care which includes going No Contact with their abuser, entering psychotherapy with a skilled and trained trauma-informed therapist who understands narcissistic abuse recovery, and working through the traumatic grief associated with narcissistic abuse. Recovery also involves connecting with a trusted support circle and developing safe, healing relationships, in addition to practicing self-soothing exercises to release trauma (yoga, expressive arts, etc). Recovery is multi-faceted and also includes restoring self-worth and investing in present and future goals. With qualified help, survivors heal and move forward to reach a place of balance and restoration of their emotional health and wellness.

*please note that the survivor of narcissistic abuse can be either male or female, as can the abuser. *