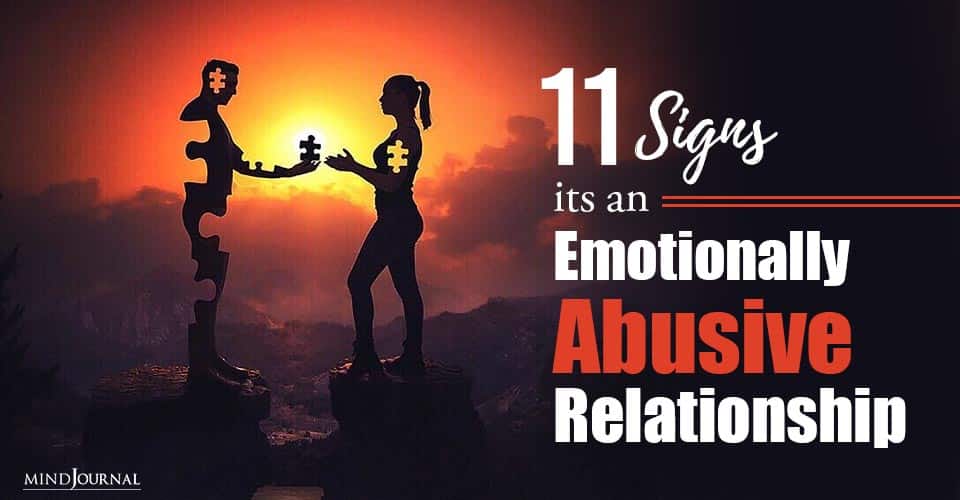 Physical abuse is something obvious. There’s concrete evidence that there is an issue and the relationship is an unhealthy one. But emotional abuse takes on a different form. It isn’t so obvious and when you’ve endured an emotionally abusive relationship like this for a long enough period of time you don’t even realize.

You begin to value the good days and good moments failing to address the bad ones. Because when someone loses their shit but is very good at blaming you and playing the victim, it’s that manipulation that makes you think this is okay.

1. They constantly put you down.

Emotionally abusive partners tend to build themselves up by knocking those around them down. They never want someone to outshine them or do better so they may never praise your accomplishments no matter how great they may be and in your mind, you’ll always think you are falling short of their expectations.

2. They say things jokingly but they aren’t kidding.

There is a little bit of truth behind every “just kidding” and when something rolls of their acid tongue you know they aren’t joking.

Related: We Often Stay In Abusive Relationships Because of Trauma Bonding

Emotionally abusive people gravitate towards those who they can manipulate and walk all over. And a common trait is someone being sensitive. But instead of taking your feelings into consideration, they blame you. Because you are always the problem.

Emotionally abusive partners lack control in other parts of their life so they try and take it out on someone they can control. They like knowing everything. They like bossing you around. And the moment you try and stick up for yourself or defend yourself, they lash out because you are trying to take away their control.

Related: You Can Get PTSD From Staying In An Emotionally Abusive Relationship

If you don’t do what they tell you to, they threaten to take things away from you. This is just another way they control you.

6. They are the first to correct your mistakes but will never own up to their own.

When you are in an emotionally abusive relationship, you’re always going to have that feeling like you are walking on eggshells or someone is breathing down your back. Every mistake you make gets called out. Yet, you’d never think to do the same if the tables were turned.

Related: 6 Common Signs You’re In An Abusive Relationship That Are Often Ignored

7. You struggle to make decisions on your own.

When someone is constantly controlling you and telling you what to do and when to do it, you become indecisive about making any choice of your own, that you freeze. And it can vary from really basic things to big life events, you ask other people’s opinions of.

8. They constantly point out your flaws.

It’s hard to build yourself up and have confidence when someone is constantly knocking you down. You begin to hear their voice in everything. You look in the mirror and you are convinced you’d be happier if you didn’t have that flaw.

9. They struggle to apologize.

They are the first to cause a scene and make nothing into something. Either they will give you the silent treatment to try and get your attention or make you feel bad for them or they’ll just be overly dramatic and leave in hopes you beg them to come back.

The need to feel wanted and needed is what their goal is and to be able to control this narrative is what motivates them most.

11. They emotionally shut down.

While sometimes they are loving and caring, other times they are cold and distant. Their ability to shut down emotions and appear heartless makes having a relationship with them difficult because you just want them to be the good version of who they are all the time but you can’t love half of one person without address who they are as a whole.

Emotionally abusive relationships are difficult because when you’ve been in one long enough your standards are suddenly very shifted and you fail to even know what a real relationship might look like. And when you’re presented with one all of it is unfamiliar