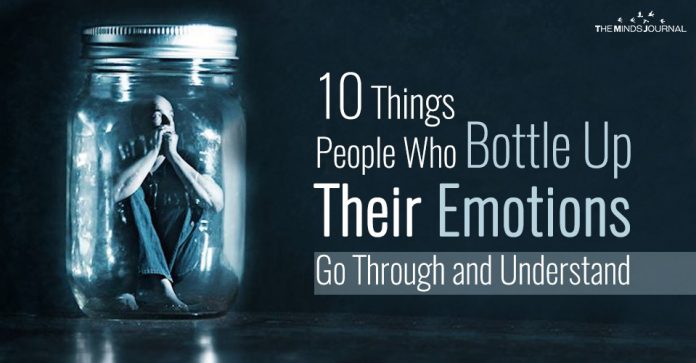 Struggles of people who bottle up their emotions.

There are people who like to live their life as an open book. Expressing their thoughts as it comes without worrying about the consequences.

This type of people hold no grudges and speak their mind and heart out, they believe in letting it out and this sort of makes their life easier and also harder at times when the winds are not blowing in their favor.

Then there are people who like to keep things within them. They fear letting out their emotions and feelings may make them vulnerable and also often it might hurt the people around them, as a result, they keep their emotions and thoughts bottled up to them.

No matter what the reason is but suppressing your emotions can have an adverse effect on your mental and emotional health.

1. Your anger is dangerous

One should avoid bottling up anger. Anger, when suppressed for long, can be really dangerous.

2. You build huge walls around you.

You are insecure about letting your emotions out to other and being vulnerable that you have built huge walls around you to keep people away and every time someone tries to get past that wall you shut them out or even lash them. In this process, you often end off cutting people who genuinely care for you.

3. Your anxiety is amplified.

Anxiety is a real mental health issue and it’s about time we address it for what it is. People who bottle up their emotions can’t also share the struggle they face due to the anxiety there by making them more anxious and more prone to not opening up.

4. You struggle to start or keep a conversation.

You get so used to with the idea of keeping things to yourself that you end up doing it with even the basic conversation. You need to ditch this idea and let your ideas out with conversation.

5. You’re not at peace inside

There is a constant argument going on in your head. You do share your thoughts with someone after all- yourself. You need to find an outlet for all the dialogues going inside your head. You cannot keep over analyzing everything and ruining things for yourself.

6. You let yourself fall prey to toxic people

You know it when people treat you ill, use you and walk over you but somehow you manage to never confront them or back off. You just bottle up everything and end up quietly talking all the rudeness, and abuses.

7. You pick up other’s negative feelings

There is certain empathy in people who bottle up their feelings. They pick up the feelings of people around them and, most of the times the negative feelings thereby adding up to their suffering.

8. You live in the survival mode

Putting your feelings out makes you feel vulnerable and all you want to do is avoid falling prey to the scavengers out there who are waiting to feed on your emotions and insecurities.

The idea of bottling up the emotions comes from the survival instinct to escape the narcissist.