Why Narcissists And Psychopaths Are Unable To Love Their Own Children 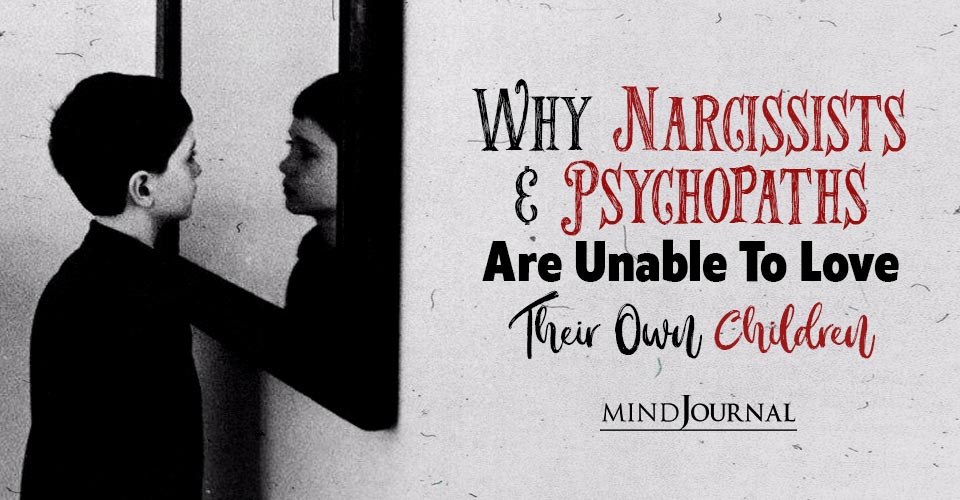 Ever wondered to yourself, “can psychopaths love?”, or “what goes on in their mind?” Well, here’s why they are unable to feel love, even their own children.

Narcissists can never really love anyone.

While there are several personality traits present in human beings, there are three we specifically need to be wary of. These three together are called the Dark Triad Personality (DTP) traits.

Narcissism, Machiavellianism, and Psychopathy make up the DTP traits. They are represented by extreme self-absorption, a tendency to be devious and conniving, and a complete disregard for others’ feelings.

We still have not discovered the exact number of people living who manifest these traits but research has estimated that about 1% – 10% of the population are DTPs.

These people are quite self-absorbed and find it hard to look at the world through someone else’s perspective. This attitude seeps into their relationships, making them domineering and cruel.

They use their romantic partners to further their own ends, often gaslighting them so that they can control them. Once they finish serving their purpose, they’re instantly abandoned.

This has raised a very pertinent question about DTPs. Can they really love any children they might have?

Can Psychopaths Love Their Own Children? 4 Reasons They Can’t

1. They can only truly love themselves

Perpetua Neo, a psychologist, and therapist who has done extensive research on DTPs has confirmed that narcissists cannot ever really love anyone else.

She points out that those who are narcissists or psychopaths or sociopaths lack one very important attribute – empathy. Without empathy, they don’t feel connected to other people at all and hence they cannot love them.

Narcissists only see their children as a thing to own in order to serve some purpose for them. A normal family will love the child and teach them how to make their own way into the world. They will try to give their child a sense of self-independence from that of the parents.

Neo says that narcissists only encourage their children so that they can show them off as a trophy once they achieve something great. For this, they will control every single aspect of their existence.

They will pry so much that the child will not know that they too can set emotional boundaries that even people close to them cannot cross.

The child will also have to carry a burden not usually thrust on those their age. Since narcissists are usually very insecure, they’ll use their child as a companion on whom they can unload their insecurities and get an ego boost.

They will ensure that it is hard for their children to form lasting, healthy relationships outside of the family. It will be difficult for them to enter a romantic relationship because the parent will always be trying to control who they interact with.

2. The child will have to be an outlet for all the narcissist’s emotions

The narcissist will take out all their issues with their child, both physically and mentally. Of course, this will not be so easy once the child grows older as they will then be able to recognize the abuse for what it is.

When the child starts resisting, the parent will then turn to subtler methods like slowly destroying their self-esteem.

The parent till will age and the accompanying health issues and changes in their body will only add on to their already existing insecurity. They will also have to watch the child grows stronger and more aware of their own identity.

It will be difficult for the parent to accept that their child is slipping out of their control so they start working harder by constantly making derogatory comments about the child’s appearance or skills.

Simultaneously, they will be first in line to take credit for whatever their child achieves. For example, if the child is skilled at sports, they will boast about how they worked hard to buy the equipment and pay for lessons, even if they didn’t have much part in it.

The family dynamic will change according to the number of children the DTP parent has.

If they have more than one child, Neo shows a distinct pattern in the way the power dynamic changes in the family.

One of the children will become the blue-eyed kid who will always be pampered and petted.

Of course, this doesn’t mean anything good for the child. They will always be scared that their actions will earn the disapproval of the DTP parent so they always stay out of trouble in order to earn their parent’s love.

The second child will be relegated to the position of the scapegoat who will have to take the fall for everything that goes wrong in the family. The parent will create an unhealthy rivalry between the two.

And in cases where there is a third child, they are usually just shunted off to one side and mostly neglected.

All this ensures that the children have very low self-confidence without any sense of self. They remain under their control.

Read 30 Ways In Which Narcissist Parenting Affects A Child

4. Will the child carry on the sins of the parent?

Many kids who have DTP parents worry that they will grow to become exactly like them. However, Michelle Piper, a psychotherapist has said that this only happens to a very small number.

She talks about how the DTP parent will try to keep their child from maturing in order to keep them under their thumb so that they can keep boosting their ego through them.

When the child grows up, they’ll know that something is not right but they will not be able to put their finger on it. Their lives till then will have revolved around fulfilling the needs of the parent in order to get affection and so they will think that the whole world works that way.

Another, more uncommon manner they adopt is that they will become very guarded and will prevent others from getting too close to them. They will try to not depend on anyone else.

Most children will usually just end up becoming doormats who will disregard their own needs for just about anyone. They will feel compelled to please everyone around them.

This also depends on the child’s place in the family. The blue-eyed boy ends up just doing what the parent wants, thereby growing up to believe that their wants aren’t important.

The other kid who had to take the fall generally do better because they don’t look to their parent for approval. They prefer to break out into the world on their own and so they’re able to create a much better life for themselves.

Having a psychopath as a parent can damage children from a very young age, and can also have deeper consequences in their adult lives. Psychopaths are so extremely self-absorbed, that loving their children is practically impossible for them.

If you want to know more about how psychopaths are unable to love their own children, then check out this video below: