The Masters Of Blame Shifting: Why Narcissists Never Become The Scapegoat 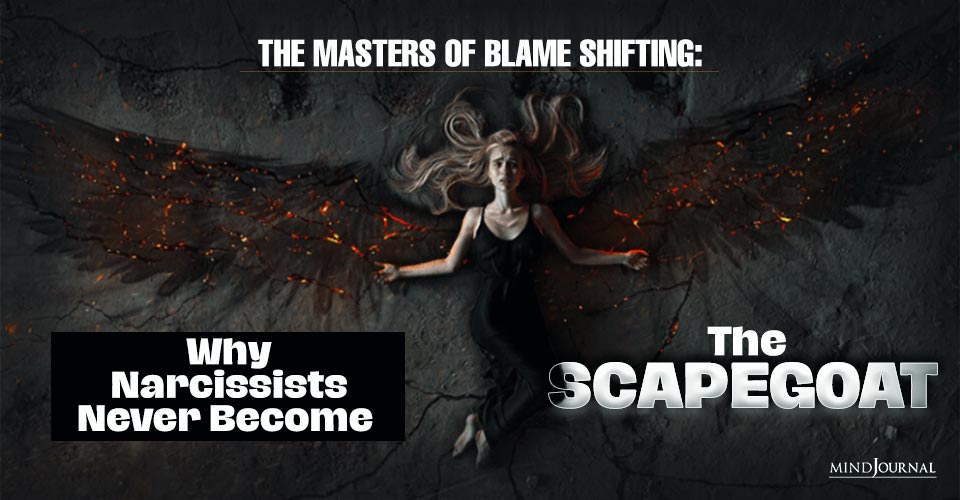 Make others the scapegoat and immunity from fault and blame follow

Thus one can move without hindrance, barrier, or boundary. Make him or her a scapegoat because if you do not get in first they will do it to you.

Make sure you blame them before they can turn that accusing eye in your direction. Stay one, no ten, steps ahead. They deserve to be blamed. If they had any value they would not be stigmatized in such a fashion, it is their own fault.

I learned that they may come with smiles but the blade of blame is held behind their back ready to strike, so plunge your dagger of fault deep into them first. Do not be taken in by the false proclamations of love and compassion, they are but veils to place across my eyes so a crown of accountability can be thrust on my head.

Soon, the lessons that I learned began to automatically teach me. Not feeling enough attention at a party? The guests are ignorant and impolite. Tell one that this is a case and see how the attention shifts. Served slowly at the bar? The barman is incompetent and he should be reminded of this fact. See how he has responded now?

Report not completed on time? Find a junior colleague and point out how he has failed to provide the necessary information. Criticized for not earning enough? Blame the bosses for running the company into the ground and failing to reward an achiever such as I. Feeling restless and unloved? Lash out at her so she seeks to make amends. Stuck in a traffic jam? Blame the department of transport for the ill-thought-out road works.

Read: The Narcissist Blame Game: Why It’s ALWAYS Your Fault?

Struggling to sleep? Must be those damned neighbors and their late-night music, go and give them a piece of your mind and see how much better you feel when you point out they are at fault.

But what if it is not those things and it is because I am not interesting enough to talk to, or not attractive enough to catch the server’s eye, or not good enough at my job, or not hitting the targets because I cannot apply the required effort, or because I do not show her any affection any longer, or because I set off late from the house, or because I fell asleep this afternoon?

Never. That is what they want you to think. That is the control that they seek to exert over you. That is how they get inside your mind and try to make you think that you are weak when you are not.

The diktat still resonates even now, reminding and emphasizing. That is not your role. You are better than all of them. You will rise above them and do that you must work hard at everything and ensure that they are the ones who are to blame because they are.

They are the ones who are trying to stop you from achieving and claiming what is rightfully yours. They are the traitors, the insidious foes, the treacherous betrayers who spout sedition and practice disloyalty. Let them know who they are, scapegoat them.

Thus this carries into everything that we do. We find a scapegoat in every aspect of our lives. The put-upon sibling, the browbeaten colleague, the lambasted neighbor, the oddball in the local superstore, the subjugated underling, the butt of the social circle, and most of all you, the intimate partner who becomes the ultimate scapegoat.

It is you that becomes the receptacle for our domineering, hectoring, nagging, bullying, blaming, intimidating, coercing, blaming, accusing, menacing, terrorizing, bludgeoning, and oppressive persecutions.

This conditioning ensured that the only way to stay ahead, to win, and to succeed was to find someone else to blame and that does not change because we know you are just waiting to try to blame us, well we know your game. We have you in our eyes and it is you who is to blame, not us.

The only way to prevent the hell of being a scapegoat is to make others a scapegoat instead. And so I do as I do, I say as I say and I am what I am so that I do not end up like him, like her, like them, like you.

Can you really blame me for doing that?